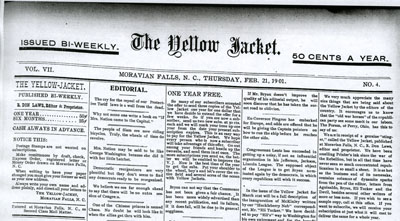 Although he had never seen a printing press, young Laws at age thirteen made one and carved type for it from mountain laurel wood. While still in his teens, he acquired a small job press and a limited assortment of type. In June 1895 he began publishing The Yellow Jacket, a three-column, four-page monthly newspaper, at an annual subscription price of ten cents. Strongly Republican in orientation with fiery political expressions, it grew to as many as twelve pages with five columns, an annual subscription price of twenty-five cents, and a circulation of nearly half a million.

The newspaper was especially popular during the presidency of Woodrow Wilson, when Laws lambasted the Democratic administration. For many years thereafter, a regular column, "Stingers," contained short paragraphs in which the editor expressed his opinion on a wide range of subjects and attacked Democrats, Socialists, Nazis, "Liars and Leeches, Hypocrites and Humbugs and Demagogues and Dastards." One widely cited "Stinger" observed: "It is said that Adam named the animals and Seth named the stars. But that doesn't explain why a jackass is used to typify the New Deal Party."

In 1906 Laws developed waterpower on Moravian Creek near Moravian Falls when he erected an undershot waterwheel and installed a dynamo. Power from it provided light for his office and home and was used to operate his presses. Soon cornmeal and flour were produced at a mill he erected at the site. Laws eventually became the first publisher in the state to install a Hoe automatic, circular stereotype high-speed press.

The success of The Yellow Jacket made the community of Moravian Falls, which had a population of not over 250, a curious printing center. As many as eighteen publications, some of them amateur ventures, began there in the early twentieth century. North Carolina poet laureate James Larkin Pearson got his start in the printing business working for Laws, who was his brother-in-law. Other men, many of them related to Laws, began successful printing careers at The Yellow Jacket. Most of the young people in the community at one time or another worked for Laws, folding, addressing, printing, and doing other work to get out the newspaper.

In his later years Laws was a popular lecturer at schools in North Carolina and elsewhere where The Yellow Jacket was read. Much of his public speaking was centered on biblical and world history, and one of his most popular lectures was entitled "High Spots in History from Adam and Eve to Amos and Andy." Laws was also an organizer of the Deposit and Savings Bank in North Wilkesboro, while surveying and road construction were long-standing interests. In 1916 he was chairman of the Wilkes County Road Commission.

Laws continued to publish The Yellow Jacket until his death, but publication was interrupted for several months early in 1951, when one of his legs was amputated because of a blood clot. After he died, the Journal-Patriot in North Wilkesboro printed a few issues of The Yellow Jacket with Law's daughter, Thelma, as editor.

Laws and his wife, Dora Carolina Wallace, had seven children: Barney Weaver, Shafter Robert, Thelma Margaret, Frances Amanda, Rose-Marie Jennings, Romulus Don, Jr., and Virginia Hairston. Laws was a lifelong supporter of the Moravian Falls Methodist Church, a member of the Republican party, and a Mason. He was buried in the Moravian Falls Cemetery.