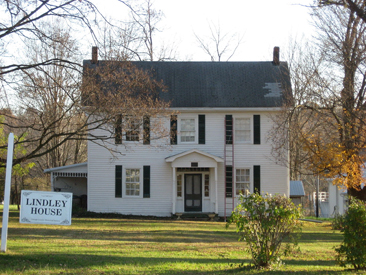 Jonathan Lindley, legislator and Quaker leader, was born in Orange County, the son of Thomas and Ruth Hadley Lindley and the grandson of James and Elinor Parke Lindley and Simon and Ruth Miller Kearns Hadley. These six of his forebears were all Irish-born Quakers who came to America around 1713. The Lindleys settled in Chester County, Pa., and the Hadleys only a few miles away in New Castle County, Del. Around 1751 Thomas Lindley moved his family to the Cane Creek Valley in what is now the southern part of Alamance County. They were among the founders of Spring Friends Meeting, and Thomas gave the land on which the meetinghouse and cemetery are located.

In 1775 Jonathan Lindley married Deborah Dicks, daughter of Zacharias and Ruth Hiatt Dicks, near neighbors of the Lindleys. Zacharias Dicks was one of the ablest and most widely known of the Quakers ministers in America, and his wife was also a minister.

Between 1786 and 1805, during the critical period of transition following the Revolutionary War, Lindley served five terms in the North Carolina House of Commons and one term in the senate. His continued appointment to committees that dealt with matters of finance leads to the conclusion that the General Assembly recognized his competence in this important field of public interest. While in the House of Commons, he introduced and pushed to a test vote a bill that would have prohibited further importation of slaves into North Carolina. The voters of Orange County elected him as one of the five delegates from that county to the convention that met in Hillsborough in 1788 to consider ratification of the Federal Constitution. He, with other members of the delegation from Orange County, voted against ratification with the view of waiting until a Bill of Rights could be added. A few months later, as a member of the House of Commons, he voted favorably on a resolution calling for a second convention to be convened to consider ratification of the Constitution. This convention met in Fayetteville in 1789 and voted for ratification.

In private life Lindley was a merchant and a surveyor. He had investments in lumber and the turpentine business, and he engaged in numerous land transactions. He is said to have accumulated considerable wealth and is reputed to have taken a large sum of money with him when he migrated to Indiana.

In 1811 he led a wagon train of emigrants from his section of Orange County to the Lick Creek watershed in the southern part of the Territory of Indiana. According to one Lindley tradition, two hundred people went to Indiana in this caravan. A Quaker history indicates that seventy-five of them were members of the Society of Friends. Quaker records further reveal that more than thirty of the emigrants were close relatives of Lindley and that eleven of them were his children, some married and with their own families. Jonathan Lindley's oldest son, Zacharias, had settled in Lick Creek Valley two years before the arrival of the great Lindley caravan. Two years before leaving North Carolina, Jonathan had made a prospecting trip to Indiana and had purchased a large tract of land where Terre Haute now stands, but Indian discontent in that region caused this large caravan of emigrants to stop in the southern part of the territory.

According to tradition, Lindley's unmarried daughters cut trees and hewed logs for the construction of their first home in Indiana. Jonathan was one of the founders of the Lick Creek Friends Meeting, the first in southern Indiana. He also constructed a gristmill along the upper waters of Lick Creek. He was the first judge of the circuit court of Washington County, which at the time covered a large part of southern Indiana. He took the lead in establishing Orange County, named for his native county in North Carolina. His son Zacharias was the first sheriff of the new county. When Indiana attained statehood, Jonathan Lindley was the first representative of his county in the General Assembly of the new state. He also introduced a bill that provided for the organization of a bank at Vincennes. The General Assembly named him to a board that established a State Seminary that later became the University of Indiana.

Jonathan Elliott, ed., Debates, Resolutions and Proceedings on the Adoption of the Federal Constitution, vol. 3 (1830).

Info. on Christopher Cox who

Info. on Christopher Cox who came from Orange Co. NC to Indiana in 1816 or there about.
Thanks

I am forwarding your question to Reference Services at the NC Government & Heritage Library.  A reference librarian will contact you shortly to help you with this question.