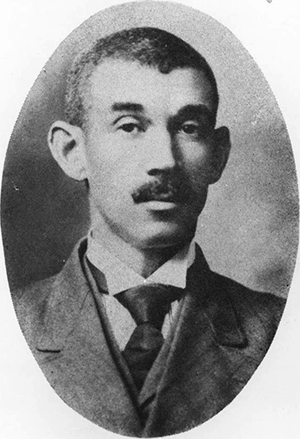 Aaron McDuffie Moore, black physician, businessman, and humanitarian, was born in Columbus County. His parents belonged to the third generation of Negro-Indian-Caucasian families who had owned land in this area as free farmers since the early nineteenth century. Moore, like his nine brothers and sisters, alternately worked on the family farm and attended the county elementary school. After completing the eighth grade he attended normal schools in Lumberton and Fayetteville, returning to his home community for a time as a teacher. In 1885 he enrolled in the newly built black college in Raleigh, Shaw University, and was accepted into its school of medicine, the Leonard Medical School. He completed the four-year program in three years, passed the North Carolina medical board examinations, and in 1888 settled in Durham as the city's first black physician.

Moore married the daughter of John C. Dancy, one of North Carolina's leading black political figures, and became involved in politics himself as a candidate for Durham County coroner. But even in the late 1880s, well before North Carolina's white supremacy campaigns, he found the white majority of Durham hostile to his efforts in direct politics, so he, like other black leaders of the New South, redirected his energies to self-help, racial solidarity, and the formation of all-black institutions. In 1895 he helped organize a community pharmacy, and from that time on he participated in a wide range of black business activities, most notably as medical director and cofounder with John Merrick of the North Carolina Mutual Life Insurance Company. Organized in 1898, the North Carolina Mutual became the largest black business in the United States and brought Durham considerable fame as the "Capital of the Black Middle Class." On Merrick's death in 1919, Moore became president of the company, serving until his own death in 1923.

In the meantime he maintained his medical practice, never sacrificing his primary identity as physician and community servant. Indeed, he is remembered more for his service and philanthropy than for his business efforts, a distinction that lost its meaning in terms of the racial self-fulfillment that Moore had in mind. With Merrick's help in raising money from the white community, Moore founded Lincoln Hospital in 1901 and the Durham Colored Library in 1913. Beginning in 1914 he became absorbed in the rural education movement for the black school children of North Carolina. He personally financed a campaign to point up the need for such schools and then successfully petitioned for state funds and a matching grant from the Rosenwald Foundation.

Moore spent another part of his life working for the Baptist church. At Durham's White Rock Baptist Church he was chairman of the board of deacons, a member of the board of trustees, and superintendent of the Sunday school for twenty-five years. Beyond Durham he served as president of the Baptist State Sunday School Convention. His work for the Lott Cary Foreign Missionary Convention took him to Haiti, where, with funds he had raised in the United States, he founded the Haitian White Rock Baptist Church. He also raised funds for missionary work in Africa. Moore served as trustee for the Baptist orphanage in Oxford and as chairman of the board of trustees for Shaw University, his Baptist alma mater to which he willed five thousand dollars.

His wife, Cottie Dancy Moore, survived until 1950. Their two daughters, Mattie and Lyda, married executives of the North Carolina Mutual. Mattie died prematurely in 1929; Lyda lived in Durham and carried on her father's legacy of social service as founder and editor of the Negro Braille Magazine.

Walter B. Weare, Black Business in the New South: A Social History of the North Carolina Mutual Life Insurance Company (1973).