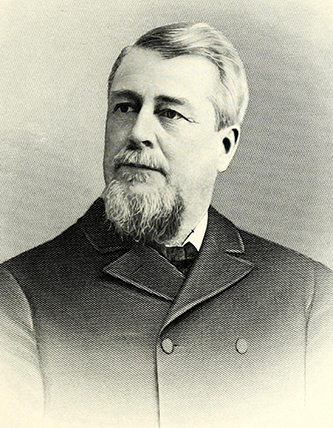 Roger Moore, civic and church leader and Confederate officer, was born in Wilmington, the son of Roger and Ann Sophia Toomer Moore. He was a descendant of James Moore, colonial governor of South Carolina and of "King Roger" Moore, founder of Orton plantation. In 1871 he married Susan Eugenia Beery, the daughter of Captain Benjamin Beery of Wilmington. They were the parents of nine children, seven of whom survived infancy: Anne, Parker Quince, Henry Roger, Edwin Yeamans, Robert Jefferson, Louis Toomer, and Mary Ella.

In the spring of 1862 Moore entered military service as a member of Laurence's Partisan Rangers and subsequently was assigned to the Third North Carolina Cavalry. When Laurence's rangers were divided into two companies, Moore was promoted from the ranks to the captaincy and commanded the second company; subsequently, he was made commissary of the Third Cavalry. A year later he was promoted to major and in 1864 to lieutenant colonel, having previously taken command of the regiment following the capture of Colonel John A. Baker. While with the Third Cavalry, he participated in the battles of Kinston and New Bern and the cavalry engagements on the Blackawatts; he then saw action with General James Longstreet in the Suffolk area, resulting in approximately twenty-three encounters with the enemy.

After the surrender at Appomattox Moore returned to Wilmington, where he first engaged in the grocery trade and then went into the brokerage business, subsequently becoming the agent for Paterson, Dawning, and Company. Finally he opened a building supply firm called Roger Moore Sons Company.

His civic record included frequent service as alderman of Wilmington, chairman of the New Hanover County Board of Commissioners, president of the Wilmington Produce Exchange, member of the board of directors of the Seaman's Friends Society, and chairman of the Board of Hospital Managers and of the county auditing board. He was also director of the Associated Charities, chief of the volunteer fire department, and chairman of the board of trustees of the YMCA. As a member of Grace Street Methodist Church, he filled all positions open to laymen.

Moore befriended a young Chinese seaman, Charlie Soong, introduced him to the Methodist faith, and helped obtain his release from the U.S. ship on which he was serving. He then told his old friend from Civil War days, Julian S. Carr, of Soong's intense desire for an education. Carr made it possible for Soong to attend Trinity College in Durham and Vanderbilt University in Tennessee. After returning to China, Soong succeeded in business and lent his influence towards the spread of Christianity. One of his daughters became the wife of Chiang Kai-shek, while the other married Sun Yat-sen.

In the tragic Wilmington race riot of 1898, Moore was called on to be chargé d'affairs until the military could arrive. After forty-eight sleepless hours he was able to return home. No sooner had he arrived than a delegation called on him, requesting that he rush to the jail to prevent a lynching of some of the men held there. It was believed that Moore was the only Wilmingtonian who could control the mob, and this he did. He stood in front of the jail door for twelve hours, daring anyone to harm the outsiders (prisoners who were not from the area), whom he shipped out on the first northbound train the following day. He died a little over a year later at age sixty-two and was buried in Oakdale Cemetery, Wilmington.