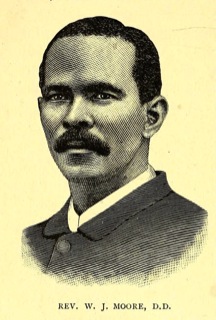 William John Moore, Methodist clergyman and supporter of Livingstone College, was born at South Creek, Beaufort County, the son of free black parents. His father, Alfred, purchased twenty-five acres at a place in the county called Keysville. Following his mother's death the previous year, the family moved to Washington, N.C., about 1847.

Unhappy with a stepmother, young Moore shipped on a schooner and from 1848 to 1862 worked as a sailor. While ashore for three winters, he attended night school. He took his sister, Mary Susan, to New York in 1854, but she died of smallpox two years later. In 1855 he is reported to have "embraced" religion. While sailing between New York and Washington, Moore was married in the latter town in 1858 and thereafter worked out of New York until 1862. In that year he sailed from New York for the West Indies and on the return voyage was captured near Portsmouth Island, N.C. Taken to his old home in Beaufort County, he was obliged to work as a cook for the Tar River Navigation Company. After the fall of New Bern to Union forces, work ceased on the Tar River and Moore and his father engaged in shad net fishing. Taken aboard U.S. gunboats, the younger Moore served for a year as a steward on a steamer.

ater in Washington, he said, he "got religion." After a Union chaplain in the town organized the Methodist Episcopal Church, North, Moore was made secretary. When Washington was evacuated, he and other blacks were taken to New Bern and settled at a place soon known as James City. Their church was reorganized, became affiliated with the A.M.E. Zion church, and Moore, having been licensed in August 1863, became its preacher. Ordained a deacon in 1864, he became an elder in 1865 and was appointed to serve a church in Fayetteville. In turn, he was assigned to the town of Beaufort and then for a period to Granville County. Afterwards he served in Salisbury, Statesville, Charlotte, Wilmington, and New Bern; in time he became a presiding elder. 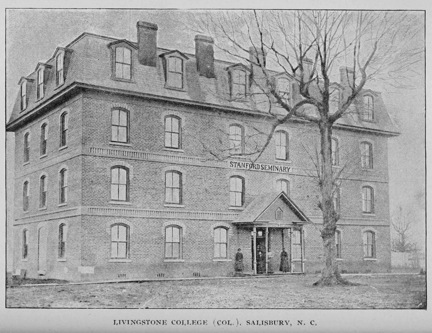 Moore was cited for his diligence in organizing sixty-eight congregations, building eleven churches, and improving many others. He licensed fifty-four local preachers, lent financial support to establish the Star of Zion, and was among the first to make a contribution towards the creation of the institution that is now Livingstone College in Salisbury, incorporated in 1879 and opened the following year. He was a member of its first board of trustees and received an honorary doctor of divinity degree in 1892. Moore was still living as late as 20 June 1901, but no record has been found of his death.