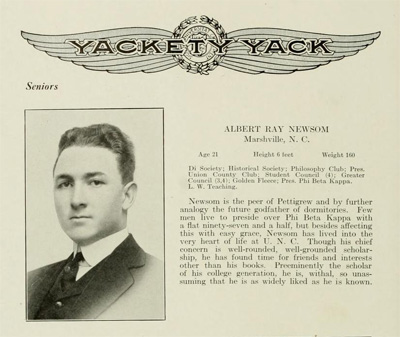 Albert Ray Newsome, historian, archivist, and teacher, was born at Marshville, the son of Richard Clyde and Julia Ross Newsome. Studious from boyhood, he was graduated from The University of North Carolina in 1915 with the highest academic record in his class. From 1915 to 1918 he taught in the public schools of Elizabeth City and Washington, N.C. In the summer of 1919, after eight months in the U.S. Naval Reserve, he joined the history staff of Bessie Tift College in Forsyth, Ga. In the autumn of 1921 he entered the University of Michigan as a graduate student and part-time instructor. Two years later, after having completed the residence requirements for a Ph.D. degree, he joined the faculty of The University of North Carolina, where he was an assistant professor of history until 1926.

In the summer of 1926 Newsome was appointed secretary of the North Carolina Historical Commission (later the Department of Archives and History), which had been established on a solid basis by R. D. W. Connor during the first decade of the century. Generously gifted and superbly trained for both editorial and archival work, he edited the North Carolina Historical Review with skill and thoroughness as he built an already good Historical Commission into an outstanding one. The excellence of his archival and edito 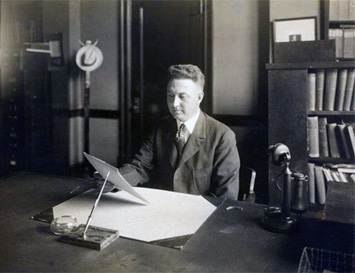 rial work soon attracted national as well as local attention, and he was elected president of the National Conference of Historical Societies (1928–29) and chairman of the Public Archives Commission of the American Historical Association (1932–34). In 1932 he published The Preservation of Local Archives: A Guide for Public Officials, and in the mid-1930s he played a key role in the establishment of the Society of American Archivists, serving as its first president from 1936 to 1939.

When, in 1934, the position of archivist of the United States was created and President Franklin D. Roosevelt asked R. D. W. Connor, then head of the history department at The University of North Carolina, to serve as first archivist of the United States, Newsome accepted an invitation to return to Chapel Hill and assume Connor's duties as head of the department and professor of American history. Newsome ran the history department until 1950, when poor health compelled him to give up all administrative duties. During these fifteen years he not only guided a growing department firmly and played a central role in the making of policy throughout the university, but he also served for several years both as editor of the James Sprunt Studies in History and Political Science and as historian of the North Carolina Department of the American Legion and did considerable research and writing. His publications included The Presidential Election of 1824 in North Carolina (1939); The Growth of North Carolina (1940), and North Carolina: The History of a Southern State (1954), in collaboration with Hugh T. Lefler; and numerous articles for the North Carolina Historical Review, the American Archivist, the Dictionary of American Biography, Public Documents, and the Encyclopedia Britannica.

Newsome was regarded as a superior teacher, and his students frequently spoke of his lectures as models of organization, thoroughness, and clarity. A sensitive, gentle, and sincere person, he was never too busy to talk with a colleague or a student who had a problem.

On 4 June 1917 he married Frances Vaughn, and the couple had two daughters: Jennie Wells and Julia Frances. Newsome was an Episcopalian and a Democrat. He died in Chapel Hill and was buried in the town cemetery.