William Norwood, Episcopal clergyman, was born in Hillsborough, the son of Judge William Norwood and his wife Robina Hogg, the daughter of James Hogg. He received an A.B. degree from The University of North Carolina in 1826. Deciding to enter the ministry, he studied at the General Theological Seminary in New York with funds provided by the Diocese of North Carolina and was graduated in the class of 1831. It is highly likely that Norwood was ordained deacon in the summer of 1831 by Bishop Richard Channing Moore, of Virginia, who supervised the Diocese of North Carolina in the interim between the death of Bishop John Stark Ravenscroft and the election of Bishop Levi Silliman Ives.

As deacon, Norwood assisted at the first service Bishop Ives performed in his diocese—held at Warrenton on 24 Sept. 1831. For the remainder of that year and in 1832, Norwood served as a missionary in the vicinity of Northampton and Bertie counties. His work at Northampton Courthouse eventually led to the organization of the Church of the Savior in Jackson. 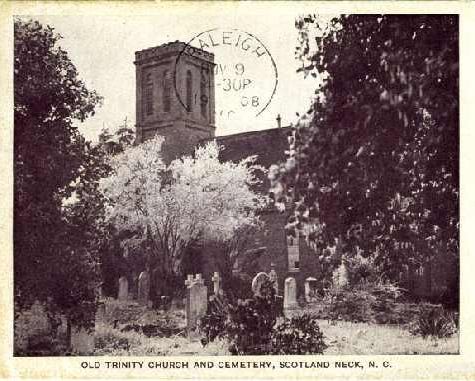 Norwood was ordained priest by Bishop Ives on 20 May 1832 at St. Paul's Church, Edenton, during the annual diocesan convention. Late that year he began to devote two Sundays a month to Scotland Neck in Halifax County; he was also a missionary in Tarboro. It is no doubt a tribute to the ability of the young clergyman that Trinity Church, Scotland Neck, and Calvary Church, Tarboro, were organized and admitted to the diocese in the spring of 1833. In Scotland Neck, he found a wife, Winifred Blount Hill, the daughter of Thomas Blount and Rebecca Norfleet Hill. In 1833 Mrs. Hill, a zealous churchwoman, erected the first church building of Trinity Parish at her own expense. In the early spring of 1834 Norwood became rector of Emmanuel Church, Warrenton, and of old St. John's, Williamsboro. He continued in that capacity until late 1836, when he accepted a call to assist the Right Reverend Richard Channing Moore at the Monumental Church in the city of Richmond.

In July 1836, before moving to Virginia, Norwood performed the marriage of Horace Greeley and Mary Cheyney, a schoolmistress who was then employed by a private school in Warrenton. Greeley, later a prominent journalist and statesman, became an intimate friend of the clergyman and visited Norwood in Richmond when he came south to post bond for Jefferson Davis after the Civil War.

At the time Norwood went to the Monumental Church, which has been referred to as the "Mother Church" of the Episcopal denomination in Richmond, Richard Channing Moore was rector as well as bishop of the Diocese of Virginia. On the death of the bishop in 1841, Norwood became rector. Because the Monumental Church had outgrown the needs of the congregation, plans were made almost immediately for a larger and more centrally located edifice. The cornerstone of the new church, St. Paul's, was laid on 10 Oct. 1843 and dedicated two years later. The rector and congregation of the Monumental Church moved into the new building in a body, carrying with them the parish records. St. Paul's Church, a handsome building in the classical style, located on the west side of Capitol Square, soon became a Richmond landmark. Unfortunately, Norwood's health began to fail and in late 1849 he resigned the rectorship of the new church.

By 1854 he had recovered sufficiently to assume the charge of Christ Church in the Georgetown section of Washington, D.C., where he remained until 1861. Returning to Richmond, he served as rector of historic St. John's until 1862. His last parish, Emmanuel at Brooke Hill, then north of Richmond, was one of the diocese's new churches. In the words of Elizabeth Wright Weddell, the historian of St. Paul's, Norwood had the unique distinction of having been the rector of Richmond's three historic churches and at the time of his death was personally known to almost every citizen. In recognition of his distinguished career, he was awarded a doctor of divinity degree by his alma mater, The University of North Carolina, in 1856.

Norwood and his wife were the parents of seven daughters and four sons. Of the sons, John Jones (1842–1919), who became an Episcopal clergyman, was rector of Trinity Church, Scotland Neck (1872–74), which his father had helped organize many years before. William Norwood was buried in the churchyard of Emmanual Church, Richmond, his last charge. A portrait of him in vestments, by William Garl Browne, hangs in the parish house of St. Paul's. The parish house itself occupies the site of the house built by Norwood while he was rector of the church. In 1923 the parish dedicated the Norwood Room in memory of Norwood's daughters, Rebecca Hill (1833–1919) and Mary Louise (1850–1923). Rebecca Hill Norwood founded and, for many years, was president of the women's auxiliary of St. Paul's Church.

Journals of the Annual Convention, Diocese of North Carolina (1829–37).