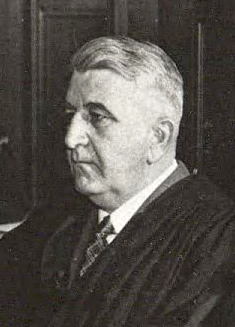 Fitzroy Donald Phillips, attorney and judge, was born in Laurinburg, the son of Robert D., a lumberman, and Anna McLean Phillips, a first cousin of Governor Angus W. McLean. He received his early education in the public schools of Florida, where the Phillips family engaged in manufacturing and merchandising lumber. After attending the Georgia Military Academy, Phillips entered the University of Georgia in 1911, studied at the University of Florida for a brief time in 1913, and enrolled as a law student at The University of North Carolina for the year 1913–14. In both Georgia and Chapel Hill he was a member of Kappa Sigma fraternity, and at The University of North Carolina he also played football—he was the last surviving member of the team of 1913. Although he had not completed the law course, he applied to the state law board; after examination, he was admitted to the state bar in 1914. He returned to Laurinburg and entered the practice of law with W. S. Thomas in 1915.

In May 1917 Phillips volunteered for military service and in September was commissioned second lieutenant in the infantry. Ordered overseas, he saw action of five fronts. While attached to the 125th Infantry, 32nd Division, in the region of the Alsace-Lorraine, he took part in the Battle of Chateau Thierry. He later was in battles in the Soissons sector and on the Meuse. At the Argonne offensive, he fought for twenty-one days in a continuous battle. He was awarded the Croix de Guerre by the French government and cited by the American commander for bravery. In 1919 he was discharged following service with the Army of Occupation. 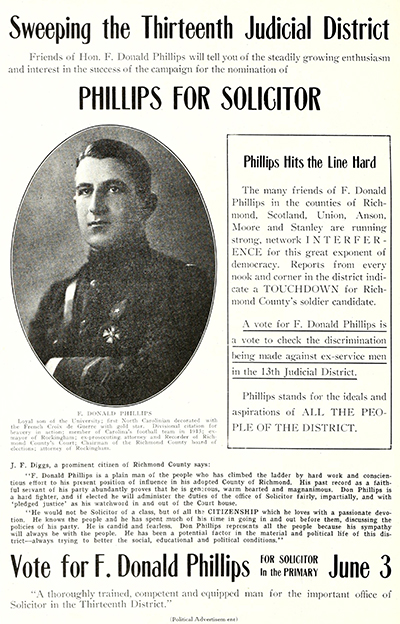 Phillips returned to Rockingham, where he discovered that he had been elected mayor in his absence. He filled this post for two years before resuming his law practice with Thomas. When his partner was elected clerk of court, Phillips formed a new partnership with J. C. Sedberry in Rockingham for the general practice of law. In 1923 he was elected solicitor of the Thirteenth Judicial District, composed of Richmond, Anson, Union, Scotland, Moore, and Stanly counties—a post he held for twelve years. In 1934 he was elected a superior court judge and remained in that post until his retirement in 1962. Except for the time in Nuremberg, Phillips served his district for twenty-eight years.

In 1946–47, after World War II, the United States participated in the International Military Tribunal that tried twenty-two Nazis in Nuremberg. President Harry S Truman designated F. Donald Phillips one of the judges. The jurists were divided into six courts of three judges each with four alternate judges. Sitting at the head of his court, Phillips tried all of the war criminals at Nuremberg assigned to it; nineteen were convicted and twelve were sentenced to death.

A Democrat, a member of the Methodist church, and an active Mason, Phillips was married on 12 Nov. 1925 to Octavia S. Scales, daughter of Walter Leak and Panthier Stauback Scales of Rockingham. They were the parents of two children, F. Donald, Jr., and Octavia Scales. He died in Rockingham and was buried in Eastside Cemetery.

This was my maternal

This was my maternal grandfather. He taught me many valuable lessons in life. I just wish I had been old enough to realize the impact he made while he was alive. RIP Papa...