Darley Hiden Ramsey, editor, newspaper manager, historian, and scholar, was born in Gretna, Va., the son of Simeon Clay and Lucy Pinckard Ramsey of Ferrum, Va. In 1903 the family moved to Asheville, where Hiden was graduated at the top of his 1908 Asheville High School class. At the University of Virginia he made Phi Beta Kappa and was graduated with an A.B. in 1912 and an M.A. in 1913. Loss of an eye in a childhood mishap limited the sports he loved so well, but he made the golf team of Virginia Polytechnic Institute and after college dropped golf altogether. His outdoor interests focused on hunting, fishing, mountain climbing, seashells, ornithology, and other pursuits of a naturalist. His frequent companion in roaming the mountains of western North Carolina and of Canada was baseball's great Branch Rickey, along with industrialists and fellow newsmen. 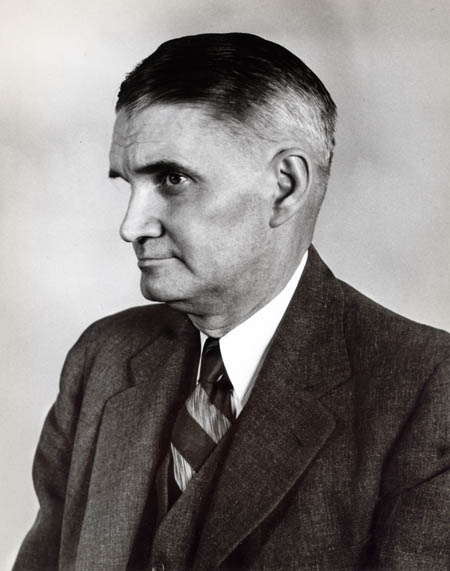 His successful campaign, in association with a young men's club, to change Asheville's city administration from aldermanic to commission form led to his election as commissioner of public safety in the new administration at age twenty-four. Four years later he was defeated for reelection and moved to Winston-Salem briefly as its commissioner of safety. He returned to Asheville in 1920 as associate editor of the Citizen and spent the remainder of his life editing or managing first one and then both the Asheville daily newspapers. With two associates he bought the Times, which he edited until 1 Sept. 1925, when it was purchased by Don S. Elias. A year later he returned to the same staff as general manager. When the Times and the Citizen were consolidated in August 1930, he continued as general manager, and later also as vice-president, until his retirement in 1954. In addition to administrative responsibilities he served as the newspapers' chief editorial writer. When the North Carolina Press Association in 1940 first instituted its annual awards for journalistic excellence, Ramsey was cited for writing the best editorial of the year. The award-winning editorial dealt with conditions in the Negro hospital in Asheville.

His skill as a "paragraph" writer—concentrating a single concept into one brief, penetrating paragraph—led to a widespread adoption of that editorial style in the 1930s and resulted in his own items being frequently reprinted in other publications, especially the Literary Digest. Fellow journalists later elected him president of the North Carolina Press Association, and he served as treasurer of the School of Journalism Foundation at The University of North Carolina. The foundation was funded largely by gifts from newspapers in the state to upgrade the training of young news writers by supplementing faculty salaries in the School of Journalism.

Ramsey carried his convictions beyond the editorial pages into personal service to community and statewide causes. During World War I he worked as civilian aide to the adjutant general recruiting officer training candidates and as fuel administrator and war savings stamp chairman for Buncombe County. He served on the State Board of Education for eight years, and when the State Board of Higher Education was created in 1955, he became its first chairman, remaining on the board for four years. In addition, he was chairman of the North Carolina Rhodes Scholarship Committee.

His aid to education was cited when The University of North Carolina granted him the LL.D. degree in 1946 and again in 1952, when he received the honorary doctor of literature degree from Western Carolina College, which he had served as a trustee for ten years and nine years as board chairman. Asheville-Biltmore College named its new $850,000 library in September 1965 the D. Hiden Ramsey Library; on that occasion, Governor Dan K. Moore spoke of him as "a man who has dedicated his life to the pursuit of knowledge and the communication of ideas." On the same campus two years earlier, Ramsey had delivered a series of ten lectures on the history of western North Carolina.

Ramsey helped persuade the legislature to create a scholarship loan fund for prospective teachers and a money-saving self-insurance fund covering fire in state school buildings. He editorialized for greater interest in health careers, an idea that won statewide and national attention.

On 30 Jan. 1926 he married Mary Sumner, the daughter of Bynum Hillard (b. 23 July 1872 near Chimney Rock, Rutherford County) and Annie Mae Reynolds Sumner, who were married on 13 June 1895. Bynum Sumner, son of Frank A. and Mary Clark Sumner, moved in 1885 to Asheville, where he founded the B. H. Sumner and Son real estate firm and where he died in May 1945. The Ramseys had one son, D. Hiden, Jr. Darley Hiden Ramsey was buried in Riverside Cemetery, Asheville.