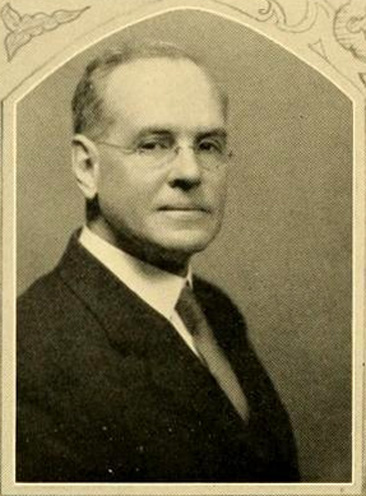 Elbert Russell, Quaker teacher, minister, biblical scholar, social reformer, ecumenical leader, and university administrator, was born in Friendsville, Tenn., the son of William and Eliza Sanders Russell. After his parents' death when he was seven, he lived with his grandfather, Josiah, and stepmother, Ruth Carpenter Barnett Russell, in West Newton, Ind., where he attended school for eleven years, graduating from high school in 1890. He was enrolled in Earlham College in Richmond, Ind., from 1890 to 1894, receiving an A.B. degree. Russell married Lieuetta Lilian Cox on 14 Aug. 1894, and they were the parents of two children: Josiah Cox, born on 3 Sept. 1900, and Marcia Rachel (Mrs. Luther L. Gobbel), born on 31 Mar. 1903.

Following brief periods of study at Chautauqua, N.Y., and in the Moody Bible Institute in Chicago, Russell was governor of boys and head of the Bible Department at Earlham College from 1894 to 1901. He studied in the Divinity School of the University of Chicago from 1901 to 1903 and was awarded a Ph.D. in 1919. After returning to Earlham as head of the Bible Department in 1903, he finally resigned in 1915 because of a divisive controversy over his views on modern biblical scholarship and their role in a Quaker college.

From 1915 to 1917 Russell lived in Baltimore, where he taught at Johns Hopkins, studied Semitics, and gave wide leadership to the Society of Friends as a resident minister. In 1917 he was invited to become director of the new Woolman School, founded by Quakers at Swarthmore, Pa. He continued in the post until 1926, giving much time to adult education, speaking, writing, preaching, traveling among Friends, and visiting many churches, colleges, and universities. For fifteen months during 1925–26 he studied, lectured, and represented the American Friends Service Committee in Germany and other parts of Europe. He was closely associated with both Orthodox and Hicksite Friends, Haverford and Swarthmore colleges, and the many Friends schools in the Philadelphia area.

In 1926 he was appointed professor of biblical instruction in the new School of Religion at Duke University. In 1928 he became dean, and for the next thirteen years in that position he helped to build the school into a widely recognized, accredited, and influential institution. Serving also as a minister in the new Duke Chapel, Russell became one of North Carolina's major theological spokesmen during the depression and World War II. After retiring as dean in 1941, he continued for another four years as professor, giving a total of nineteen years to Duke University and the Divinity School (1926–45). He served for the next year as professor of religion and college pastor at Guilford College, where he had also been a trustee, and taught for two terms early in 1951 at the College of the Gulf States in Mobile, Ala.

Russell was a pioneer in the teaching of modern biblical studies in America, particularly in Quaker and Methodist institutions and at summer conferences. He became an international leader in the Society of Friends, particularly in the movement towards unity, social reform, world peace, race relations, and the ecumenical movement. In conferences such as those at Stockholm and Utrecht, he presented papers and worked on many commissions representing the American Friends Service Committee, the Fellowship of Reconciliation, and the Methodist church, which led to the establishment of the World Council of Churches. During visits to Europe and Latin America, and on one trip around the world (1933–34), he carried out a variety of missions furthering the cause of theological education, church unity, and social reform.

He was among the founders of the Chapel Hill and Durham Friends Meetings and the Carolinas Institute of International Relations. An ardent Prohibitionist, he frequently supported liberal political action. Russell was a prolific writer as well as speaker. Among his best-known books are A Book of Chapel Talk (1935), More Chapel Talks (1938) (at Duke Chapel), and his definitive one-volume A History of Quakerism (1942), which won the Mayflower Cup for best book published in North Carolina in 1942. He was one of the principal preachers invited to Friends Meetings in Washington, D.C., during the administration of President Herbert Hoover.

In addition to his participation in the university community of Durham–Chapel Hill–Raleigh, he also enjoyed many summers of teaching at Lake Junaluska in the North Carolina mountains, not far from his birthplace, as well as many holidays at a summer home in Myrtle Beach, S.C. He spent the last five years of his life in the midst of another small new Quaker Meeting in St. Petersburg, Fla.

List of writings by Elbert Russell, from Worlcat (searches the holdings of multiple libraries). (accessed May 6, 2014).