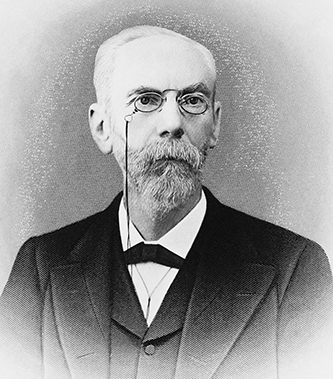 Levi M. Scott, lawyer, teacher, postmaster, and state representative, was born in Rockingham County, the son of John D. and Jane McLean Scott. While Scott was still an infant, his parents moved back to their original home in Guilford County. His father's family, which had emigrated from Pennsylvania, was of Irish descent; his mother's family was Scottish. John D. Scott was a farmer and a colonel in the North Carolina militia cavalry, a commission he held until the outbreak of the Civil War. Levi had two brothers, Allen H. and William Lafayette, an alumnus of The University of North Carolina.

Levi Scott attended schools in Guilford County and in 1845 entered Greensboro High School, where he excelled in debate and served as president of the Hermean Literary Society. In 1847 he transferred to Alamance Academy, a classical school opened by his instructor, Dr. Eli W. Caruthers. In 1849 Scott obtained a teaching position at Greensboro High, where he remained until appointed postmaster of Greensboro in 1851. During the same period he began studying law under John A. Gilmer and received his license to practice in state superior courts in 1852. He resigned as postmaster in 1853 after his election as clerk of the superior court in Guilford County, an office he held until 1856, when elected to the North Carolina House of Representatives as a Whig. He served in the legislature for one term.

In 1858 Scott was elected solicitor of Guilford County for a four-year term. He was reelected in 1862 and also appointed receiver of sequestered property by the Confederate government. In the post of receiver, which he held until the end of the war, his duties involved collecting all debts owed to Northern creditors from Southern debtors for the benefit of the Confederate states. Also during the war the law offices of Levi and his brother, William L., who maintained a joint practice, were used temporarily by Governor Zebulon B. Vance while he was avoiding the chaotic conditions of Raleigh. Thus, it was in Scott's office that Vance wrote his surrender proclamation when the war ended.

Scott also served as a commissioner, striving to establish the railroad from Greensboro to Danville, Va. Seen as a war measure, the railroad was chartered on 8 Feb. 1862, despite the state's resistance to internal improvements leading out of the state. From 1885 to 1889 Scott served on the board of directors of the State Penitentiary. Long active in the Independent Order of Odd Fellows, he served as grand master of the state in 1866.

In 1861 Scott married Mary Eliza Weatherly, the daughter of Andrew Weatherly, mayor of Greensboro, and they had two children. He died in Greensboro at age eighty-five.

Earl A. Weatherly, The First Hundred Years of Historic Guilford (1972).