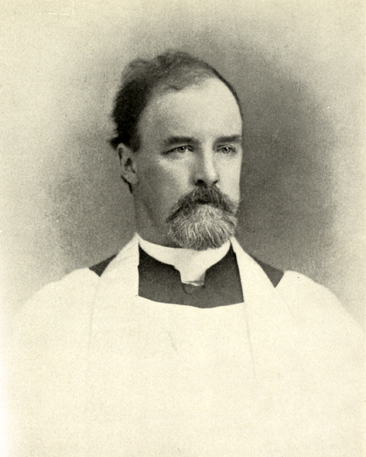 Bennett Smedes, Episcopal clergyman and second rector of St. Mary's School, Raleigh, was born in New York. The son of Aldert and Sarah Lyell Smedes, he moved with the family to North Carolina in 1842, when his father founded St. Mary's School. He was educated in Raleigh at Lovejoy's Academy and Trinity School and at the College of Saint James in Maryland. Young Smedes was graduated from the General Theological Seminary in 1860 and ordained deacon in July of that year. He served for two years as assistant to Dr. A. C. Coxe at Grace Church, Baltimore.

Wishing to return to the Confederacy, Smedes managed to get to Raleigh in the summer of 1863 and immediately enlisted; he was assigned as chaplain to North Carolina's Fifth Regiment. On 26 July he was ordained priest by the Right Reverend Thomas Atkinson, D.D., bishop of North Carolina, despite the fact that the bishop of Maryland had refused to give Letters Dismissory. Because of his own poor health and his father's desperate need for his assistance, Smedes resigned his commission in April 1864 and returned to St. Mary's, where he spent the remainder of his life. A gentle, unassuming, and scholarly man, he taught science, logic, and Bible and assisted his father in his duties as pastor and administrator until the death in 1877 of the elder Smedes.

When no one else could be found to take over the institution, Bennett Smedes, although he preferred the roles of teacher and preacher, assumed full responsibility for the school in order "to save St. Mary's for the Church." Continuing the school's traditional emphasis on Christian responsibility and academic excellence, he strengthened the faculty, improved the facilities, and reorganized the curriculum to prepare young women for the best colleges.

By 1897 Smedes felt that, having spent his inheritance and his physical strength to keep the school open, he could no longer carry the sole responsibility for St. Mary's. The Episcopal church accepted his proposal that the North Carolina dioceses buy the campus from the Cameron family. The act of incorporation vested control in a board of trustees, and in 1899 the charter was amended to involve the South Carolina dioceses. Smedes remained as rector.

Bennett Smedes served his diocese as a faithful member of important committees including the standing committee and as a trustee of St. Augustine's Normal School and Collegiate Institute (now St. Augustine's College). Generous in his support of public causes, he was even more liberal in his private charities. In 1894 The University of North Carolina awarded him a doctor of divinity degree.

Smedes died at St. Mary's. The circumstances of his death from pneumonia were typical of his unselfish devotion to others, for he had walked several miles in a driving snowstorm to collect the mail so that his young charges would not be disappointed. He was buried in Oakwood Cemetery, Raleigh. The Right Reverend Joseph Blount Cheshire, D.D., bishop of North Carolina, wrote of Smedes, "If men are to be estimated by the purity and simplicity of their Christian character and by the value of their life work to the Church and to the community, few names deserve to stand higher." Portraits of Smedes are owned by St. Mary's College and by James M. Poyner, Raleigh.