Henry Jerome Stockard, poet and educator, was born in Chatham County. His ancestors emigrated from Scotland to Pennsylvania and moved to Chatham County between 1750 and 1760. His grandfather, John Stockard, was a captain in the War of 1812 and represented Chatham County in the North Carolina legislature sixteen times. Young Stockard was the son of James Gibbs, a farmer and lumberman, and Mary Johnson Stockard. After the Civil War the family moved to Alamance County, where John Stockard died in 1870, leaving his wife with ten sons. Henry Jerome, the ninth son, was twelve at the time. He always gave credit to his mother for what he was able to achieve. 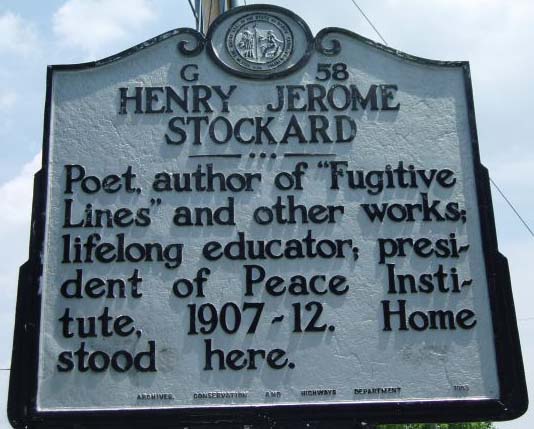 Stockard attended Graham High School and took special courses at The University of North Carolina, where he was encouraged and influenced by Dr. Thomas Hume. After receiving an A.M. degree from Elon College in 1889, he taught in Alamance County before becoming the principal of Graham High School and then the superintendent of Alamance County Schools. In 1892–93 he returned to the university as assistant professor of English. From Chapel Hill he went to Fredericksburg, Va., where he taught English and political science at Fredericksburg College. In 1900 he moved back to North Carolina to teach Latin at Peace Institute in Raleigh, then served as president of Peace from 1907 to 1912. Preferring the classroom to administrative duties, Stockard resumed his position as professor of Latin until his death two years later. In 1914 Wake Forest awarded him an Litt.D. degree in recognition of his literary work.

In 1886 Stockard won a poetry contest sponsored by the North Carolina Teacher, and from this beginning he went on to acquire fame for his poetry, especially his sonnets. He became the unofficial poet laureat of North Carolina, and his work was published in such national magazines as Harper's, Scribner's, Century, Atlantic Monthly, and Youth's Companion. His poems also appear in Library of Southern Literature (vol. 11), Songs of the South, Edmund C. Stedman's American Anthology, and Richard Walser's North Carolina Poetry. Stockard himself published two volumes: Fugitive Lines (1897) and A Study of Southern Poetry (1911), an anthology used as a text. In 1939, twenty-five years after his death, another volume, Poems, was published. He was often called on to write poems for special memorial occasions. These included "The Last Charge at Appomattox," written for the unveiling of the North Carolina monument at Appomattox, and "Stanzas," for the unveiling of the monument to the women of the Confederacy on Capitol Square in Raleigh.

In 1878 Stockard married Sallie Holleman, of Morrisville. Before her death in 1888, they had four children: Lelia, Leon, Albert, and Elsie. In 1890 he married Margaret Lula Tate, of Graham, who died in 1936. Stockard and his second wife had six children: Amelia, Henry Jerome, Lula, James, Armstrong, and Hubert.

Stockard was a Democrat, an elder in the Presbyterian church, and one of the founders of the North Carolina Literary and Historical Association. He died at his home in Raleigh and was buried in Oakwood Cemetery. A portrait of him—a gift of the Stockard family—is at Peace College.

Stockard, Henry Jerome, and Henry Jerome Stockard. 1897. [Announcement of verses to be published with request for orders and extracts/comments from reviews of the author's work]. Fredricksburg, Va: Fredricksburg College. https://www.worldcat.org/oclc/43545294 (accessed March 19, 2013).