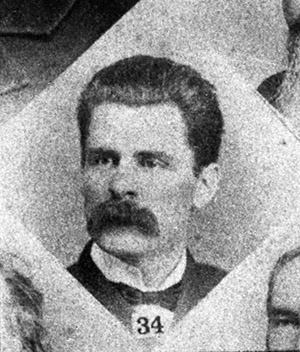 Wilfred Dent Turner, lawyer, legislator, lieutenant governor, and businessman, was born at Turnersburg, Iredell County, the son of Wilfred and Dorcas Tomlinson Turner. His grandfather, Samuel Turner, moved to North Carolina from Port Tobacco, Md., in 1818. His father was a member of the House of Commons in the 1852 General Assembly and was a pioneer in the establishment of a cotton manufacturing business on Rocky Creek in the present community of Turnersburg. The Turners and Tomlinsons were prominent families in the northern section of the county where both the community and the township were named for the Turners.

His early education was in the old-field schools of the county, Olin Academy, and Mount Airy High School. From Trinity College in Durham he received the B.A. degree in 1876 and the M.A. degree in 1879. After completing his undergraduate work he returned to the county and began to read law under Judge Robert F. Armfield in Statesville; later, without a teacher, he studied further and received a license to practice. In July 1877 he began a fifty-six-year legal career in Statesville.

Turner's successful political career opened in 1887, when he served in the state senate; he was returned for the sessions of 1889, 1891, and 1917. In 1900, as a candidate for lieutenant governor, he teamed up with gubernatorial candidate Charles B. Aycock. The Aycock-Turner victory swept the last power of Fusion rule from office for the Democrats. As lieutenant governor from 1901 to 1905, one of Turner's significant duties as president of the senate was presiding at the impeachment proceedings in 1901 against Chief Justice David M. Furches, a fellow Iredell County citizen, but of the Republican party. Turner's fairness in the trial was viewed as a demonstration of the soundness of his leadership at a time of rampant partisan politics. Although few historians link Turner with Aycock's administration, his prior service in the state senate was helpful in securing passage of the governor's legislative proposals.

In addition to successful legal and political careers, Turner had an active role in industry and finance in his home area. He was president of the Commercial National Bank and of the Imperial Furniture Company, chief organizer of the Monbo Manufacturing Company on the Catawba River, and secretary-treasurer of the Armfield Veneer Company. A prominent churchman, he was chairman of the Board of Stewards of Broad Street Methodist Church, teacher of the Men's Bible Class, and for forty years chairman of the church's board of trustees. He served on the board of trustees of Trinity College and later of Duke University for twenty-three years and was a member of the board of trustees of the North Carolina College for Women. At the time of his death he was president of the Iredell County Bar Association and a member of the North Carolina Bar Association. He was a former county attorney. From 1931 to 1933 he practiced law as the senior member of the firm of Turner, Moss and Winberry.

Turner was viewed as conservative, solid, and sound, and one who proved his heritage. He was not considered a brilliant advocate, but he commanded wide respect and received broad political support for his integrity and ability. He was married three times—first, in 1878, to Ida Lanier, who died in 1894. They had four children: Mrs. W. A. Colvert, Laura L., Mrs. James F. Robertson, and Jack. In 1897 he married Julie H. McCall, who died in 1925; their children were Mrs. W. A. Tucker and Dent. In 1927 he married Mrs. Sarah F. Goff.

Following an illness of ten days Turner died of acute nephritis at age seventy-eight and was buried in Oak-wood Cemetery, Statesville. There is a portrait of him at Broad Street Methodist Church.

Proceedings of the Thirty-sixth Annual Session of the North Carolina Bar Association, vol. 36 (1934).