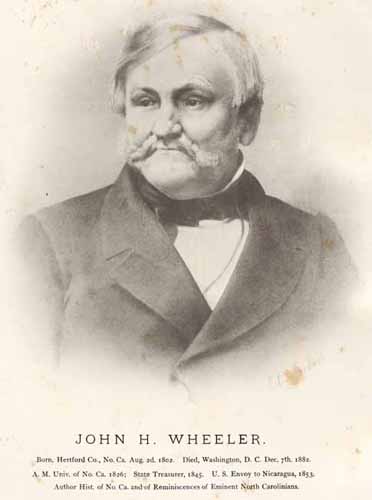 John Hill Wheeler, historian, lawyer, and diplomat, was born in Murfreesboro, the son of John, a prominent shipping merchant, and Elizabeth Jordan Wheeler. He studied at Hertford Academy under the Reverend Jonathan Otis Freeman and at age fifteen entered Columbian College (now George Washington University) in Washington, D.C., receiving his bachelor's degree in 1826. After reading law under Chief Justice John Louis Taylor, he was admitted to the bar in 1827, and the following year he received a master's degree from The University of North Carolina. At age twenty-one Wheeler was elected to the House of Commons from Hertford County, and he served for four years. At the end of his term President Andrew Jackson appointed him secretary of the board of commissioners established to adjudicate spoliation claims of Americans against France under the treaties of Berlin and Milan. He was an unsuccessful candidate for Congress in 1831.

In 1837 President Jackson appointed Wheeler superintendent of the Charlotte branch of the U.S. Mint. On his resignation in 1841, Mecklenburg Democrats nominated him to the House of Commons, but he declined because of his impending move to Lincoln County. The next year the legislature elected Wheeler treasurer of the state. In 1852 he again served in the House of Commons, that time from Lincoln County. A Mason, he was grand master of North Carolina in 1842 and 1843.

Long interested in history, Wheeler as state treasurer arranged for the printing of Indexes to Documents Relative to North Carolina, a list of papers prepared in London in 1827 for Archibald D. Murphey. After his defeat for reelection as treasurer in 1844, he devoted much time to an attempt to obtain copies of original sources relating to North Carolina history. He carried on frequent correspondence with George Bancroft, U.S. minister to England; Peter Force, Washington publisher and historian; and David L. Swain, former governor and then president of The University of North Carolina. To the three of them he dedicated his Historical Sketches of North Carolina, from 1584 to 1851, published in 1851. With all its defects (it has been characterized as having perpetuated more errors than any nineteenth-century history of the state), Historical Sketches was the first publication to utilize a substantial body of original source materials from both home and abroad. Whigs, piqued by the flowery sketches of their political rivals, referred to the two-volumes-in-one as "the Democratic Stud-Book."

James C. Dobbin of Fayetteville, secretary of the navy in President Franklin Pierce's cabinet, aided Wheeler in obtaining an appointment as assistant secretary to the president in 1854, and a few months later the historian was appointed U.S. minister to Nicaragua. Arriving there late in 1854, the inexperienced diplomat found himself caught between shifting factions in a civil war complicated by the involvement of American filibusters. Wheeler wrote that "the race of Central Americans have conclusively proved to all observant minds that they are incapable of self-government" and that Nicaragua was surely destined to "become part and parcel of the U.S." With that bias he allowed himself to be influenced by William Walker, a young Tennessean who, with a group of American mercenaries, sought to gain control over the country. Eventually Walker manipulated himself into the presidency of the republic, and Wheeler quickly recognized the new regime. Whether or not this action represented intentional disobedience to his instructions from Washington, Wheeler was recalled by Secretary of State William L. Marcy in 1856, and he resigned in March 1857. Strangely, the "List of U.S. Diplomatic Officers, 1789–1939" in the Federal Records Center, East Point, Ga., indicates that Wheeler was reappointed on 23 Dec. 1857, but, if so, he apparently declined to serve.

In July 1855, while traveling from Washington to New York for a return trip to Nicaragua, Wheeler became embroiled in a dramatic confrontation with Abolitionists. With him were a slave woman, Jane, and her two sons, Daniel and Isaiah. Boarding their steamer in Philadelphia, a group of Abolitionists informed Jane that from the moment the group crossed into Pennsylvania, the three blacks had shed their bondage. Over Wheeler's resistance, the woman and her sons were removed from the ship and put into a waiting carriage. Wheeler immediately applied to the federal district court for a writ of habeas corpus requiring Passmore Williamson, one of the leaders of the abducting group, to produce the trio. When he denied that the woman and boys were under his control or influence, Williamson was cited for contempt and imprisoned by Judge John K. Kane. The judge ruled that there was no Pennsylvania law that "affects to divest the rights of property of a citizen of North Carolina, acquired and asserted under the laws of that State, because he has found it needful or convenient to pass through the territory of Pennsylvania." Williamson's attorneys appealed the contempt citation to the state supreme court, which ruled that it had no authority to interfere with the federal court's actions. Two of the Abolitionists were fined and given a week's imprisonment for assault and battery on Wheeler, and Williamson was released after more than two months in prison. Wheeler failed in his efforts to reclaim the three blacks.

After a brief period at his home in Lincoln County following his resignation as minister to Nicaragua, Wheeler returned to Washington as superintendent of documents in the Department of the Interior, headed by Jacob Thompson, a native of Caswell County. In 1859 Wheeler accompanied Thompson and President James Buchanan on a state visit to North Carolina.

As civil war threatened, the historian unsuccessfully sought an appointment to the faculty of The University of North Carolina, where he hoped to resume research and historical writing. Though a Unionist at heart, he returned to North Carolina and in 1861 edited The Narrative of Colonel David Fanning. . . . One of his sons, Charles Sully, served in the U.S. Navy; another, Woodbury, was a Confederate soldier.

For nearly two decades John Hill Wheeler had aspired to go to England to obtain copies of additional records relating to colonial North Carolina, but his efforts had been thwarted, probably because of his partisanship. However, in September 1863, at his own expense, he boarded the state-owned Ad-Vance, slipped through the Federal blockade to Bermuda, and from there proceeded to Nova Scotia and thence to London where he spent several weeks early in 1864 copying manuscripts in the Public Record Office. In April he was back in Bermuda, and, with a Union victory becoming more apparent, late in the war he chose to return to Washington, where, except for occasional visits to North Carolina, he spent the remainder of his life in minor government jobs. In his later years, he was engaged in indexing the Congressional Record.

Wheeler delivered the commencement address at The University of North Carolina in June 1870 and was elected president of the university's Historical Society. Five years later in Raleigh he helped organize a new North Carolina Historical Society. Meanwhile, he had edited the Legislative Manual and Political Register of the State of North Carolina for the Year 1874. . . . Apparently in need of money, he contracted with Bangs and Company in New York in April 1882 to sell his library of 1,882 titles. He died the following December and was buried in Oak Hill Cemetery in Georgetown. Two years after his death his Reminiscences and Memoirs of North Carolina and Eminent North Carolinians —a potpourri of articles, county sketches, genealogies, and lists of officials—was published. The most valuable portion of his papers went to the Library of Congress; Stephen B. Weeks purchased another portion in 1899.

Wheeler married Mary Elizabeth Brown, the daughter of the Reverend O. B. Brown of Washington, D.C., on 19 Apr. 1830, and they had a daughter. Mary died in 1836, and on 8 Nov. 1838 Wheeler married Ellen Oldmixon Sully, the daughter of Thomas Sully, the Philadelphia artist. They had two sons, Charles Sully and Woodbury. Wheeler's birthplace in Murfreesboro has been preserved by the Murfreesboro Historical Association with assistance from the North Carolina Department of Archives and History.

Fanning, David. The narrative of Colonel David Fanning, (a Tory in the Revolutionary War with Great Britain;) giving an account of his adventures in North Carolina, from 1775 to 1783, as written by himself. Richmond, Va., Printed for private distribution only, in the first year of the independnence [!] of the Confederate States of America. 1861. https://archive.org/details/narrativeofcolon00infann (accessed May 3, 2013).