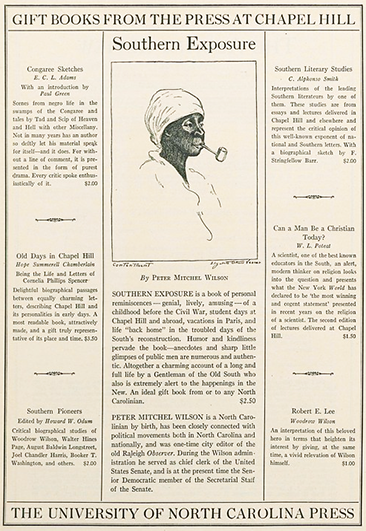 Peter Mitchel Wilson, lawyer, newspaperman, and clerk of the U.S. Senate, was born in Warrenton, the son of Thomas Epps, a physician, and Jane Marshall Mitchel Wilson. He attended Warrenton Male Academy and the Bingham School before entering The University of North Carolina in October 1865. With the decline of the university following the Civil War and the problems of Reconstruction, his parents withdrew him in October 1867 after his sophomore year and shortly before it closed. He was sent to the University of Edinborough, in part because his family did not want him to attend a Northern university, but also because they were of Scottish descent. He crossed the Atlantic in company with the family of John White, of Warrenton, who had been North Carolina's agent in England during the war purchasing needed supplies for the state. With many young men from the South being sent there, Southerners at Edinborough became a close-knit group and remained friends for the remainder of their lives.

Wilson was graduated with a master of arts degree in 1870 and returned to teach for a short while in Bellevue, Va., where his father was temporarily practicing medicine. Back in Warrenton he studied law with William Eaton, and after Wilson was admitted to the bar in June 1873 the two men practiced together. In 1877 Wilson, tiring of the routine of a lawyer's office, moved to Raleigh and became reading clerk of the state senate. During the years 1878–80 he was city editor of the Raleigh Observer, published by Peter M. Hale and William L. Saunders, both distinguished journalists. On 3 Dec. 1879 Wilson married in Christ Church, Raleigh, Ellen Williams Hale, the daughter of Peter Hale.

In some respects Wilson was a forerunner of Walter Hines Page in that he expressed concern for labor and the industrial development of North Carolina. Through his newspaper articles, for example, he described the comments and attitudes of people at a country store. His "What's the Matter with Farmin' in the South?" was widely circulated and frequently reprinted. In 1880 he became secretary of the State Board of Agriculture, a position he filled very competently for ten years. Wilson was in charge of both the U.S. and North Carolina exhibits at the World's Industrial and Cotton Centennial Exposition in New Orleans in 1884. In 1888, as secretary of the North Carolina Agricultural Society, he was the moving spirit behind the successful state fairs of that year and the next. He became state commissioner of immigration in 1889, when a great movement was under way to attract new labor and industry to the state. A large-scale advertising campaign, frequently in collaboration with railroad lines, was quite effective.

Near the end of the century Wilson moved from Raleigh to Winston, where he was secretary-treasurer of the West-End Hotel and Land Company and president of the Rowan Dunn Mountain Company. Exploration for minerals and the opening of new factories occupied him in those positions. He was executive commissioner for North Carolina's participation in the Chicago World's Fair of 1893. As an adult he found some consolation in recalling that mathematics professor Charles Phillips at Chapel Hill had told his mother that Wilson "knew less mathematics than any human being he ever saw." In retribution, Wilson noted, he served twenty years in the financial office of the U.S. Senate. He actually was the assistant financial clerk between 1893 and 1915; in the latter year he became chief clerk, a position he held until his death at age ninety-one. Altogether he served for forty years in the Senate.

In 1927 The University of North Carolina Press published his autobiography, Southern Exposure. A delightful recounting of a happy childhood and youth, it is filled with the recollections of friends and acquaintances of a long life. His choice of words, his clear descriptions, the wide range of his knowledge, and the reach of his memory combine to make this book a Tar Heel treasure.

As a member of the Democratic party Wilson described himself as a laborer in the vineyard who "never kicked: never scratched 'reckon I never knew how.'" In 1923 he wrote that he was "Brought up in [the] Episcopal Church." He and Mrs. Wilson were the parents of a daughter, Mary Badger Wilson, the author of several novels and numerous short stories. He was buried in Oakwood Cemetery, Raleigh.