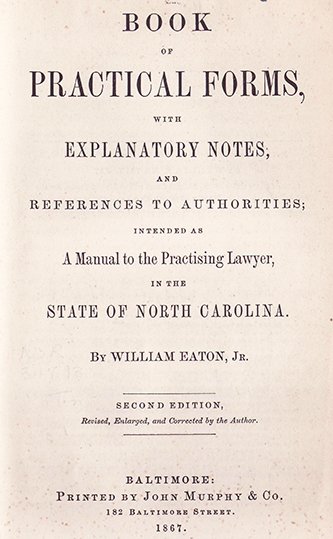 William Eaton, Jr., attorney and legislator, was born at Eaton's Ferry on the Roanoke River in Warren County, the son of William Eaton and his wife Seignora Donald Macon. He was the grandson of both General Thomas Eaton and Nathaniel Macon and half-brother of Ella Reeves Eaton, later the wife of Peter Hansborough Bell. He was referred to by his contemporaries as William Eaton, Jr., to distinguish him from his father who lived to a great age, dying in 1869. Young Eaton was graduated from The University of North Carolina in 1829. He read law under Judge John Hall in Warrenton, then began to practice in that community the following year. Entering politics, he represented Warren County in the House of Commons from 1838 to 1841 and again in the sessions of 1850, 1854, and 1856. He was elected attorney general of North Carolina for the term 1851–52.

A conservative Democrat, Eaton was against secession but supported the southern cause during the Civil War. With the return of peace, President Andrew Johnson, in May 1865, summoned several prominent North Carolinians, among them William Eaton, to a conference in Washington to present his plan for the reconstruction of his native state. D. L. Swain, B. F. Moore, and Eaton objected to the plan on constitutional grounds—particularly with regard to the appointment of a provisional governor by the president—and left the meeting without taking part in the proceedings. As his last public service, Eaton represented Warren County at the constitutional convention of 1865–66. In the famous lawsuit contesting the will of James C. Johnston, Eaton was attorney for the defense and received substantial credit for the favorable outcome of the case. Always interested in his alma mater, The University of North Carolina, he served as trustee from 1838 to 1868. He died at his home in Warrenton and was buried in Fairview Cemetery.

Considered an authority on the law, Eaton wrote A Book of Practical Forms, with Explanatory Notes and References to Authorities, intended as a manual for the practicing lawyer in North Carolina. It was first published in Philadelphia in 1854 and highly respected at the time. A revised edition was printed in Baltimore in 1867. In 1860 Eaton wrote a memoir of his legal mentor, Judge John Hall, which was printed in the University Magazine. He also was the author of a sketch of George E. Badger, published posthumously in 1886. His kinsman and law student, Peter Mitchel Wilson, described Eaton as the best jury lawyer in the courts of his day and a fine flower of the old aristocratic tradition.

In 1832 Eaton married Rosa Gilmour, the daughter of William Gilmour of Petersburg, Va., and his wife Mary Parsons. They were the parents of three daughters, of whom Rosa died young. Laura married William T. Alston and Susan married Samuel Peter Arrington. There were no children by either marriage.