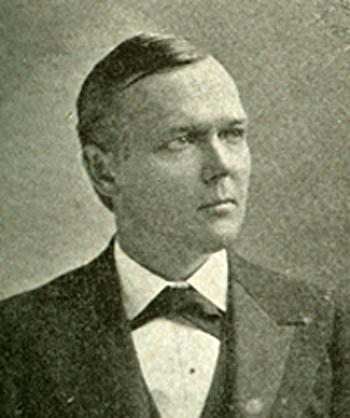 Frederick Augustus Woodard, congressman, state legislator, and lawyer, was a native of Wilson County, the son of Dr. Stephen and Mary Hadley Woodard. He was educated at the Reverend Joseph H. Foy's private school and studied law with Chief Justice Richmond M. Pearson, who immersed his students in Blackstone, Coke, and the principles of the common law. "Judge Pearson regarded Mr. Woodard as one of his best students and one of the most thoroughly prepared members of his class," according to Woodard's friend, the eminent jurist Henry G. Connor. Woodard received his law license in 1873 and began a private practice in the town of Wilson, which he made his home for the rest of his life.

A strong Democrat living in a strongly Democratic community, he soon became involved in partisan politics, serving as a leader in both the county and Second Congressional District Democratic organizations. He first ran for elective office in 1884, vainly seeking to unseat Republican congressman James E. O'Hara. In 1892 he again sought a seat in Congress, and in a three-way race that included a Populist candidate as well as incumbent Republican Henry P. Cheatham, Woodard won with a small plurality.

In 1894 Woodard was reelected, again a minority winner in a three-party campaign. His victory was one of the few successes for North Carolina Democrats as a Republican-Populist "fusion" seized control of the General Assembly and carried six of the state's nine congressional districts. One of Woodard's opponents, Henry Cheatham, contested the election in the House of Representatives, charging the Democrats with wholesale fraud. After sifting through voluminous testimony, the Republican-controlled House Committee on Elections concluded that the evidence did not support Cheatham's claim.

In his fourth race for Congress in 1896, Woodard lost to Republican George H. White. Thanks to a new election law that banned many of the unfair practices used by Democratic registrars to limit African American voting, the Second Congressional District returned to its usual Republican allegiance. Woodard was a contender for the Democratic congressional nomination in 1900, but after a lengthy session, the convention selected Claude Kitchin, a young lawyer from Halifax County. After this defeat, Woodard returned to his law practice, limiting his public service to such nonpartisan positions as trustee of The University of North Carolina and board member of the Wilson graded schools.

Because of his extensive interest and experience in railroad matters, he was elected in 1913, without opposition, to represent Wilson County in a special General Assembly session devoted to the issue of railway freight rates. He died two years later and was buried in Maplewood Cemetery, Wilson.

Woodard was married twice, first to Fannie E. Rountree and then, after her death, to Mrs. R. E. Holleman. He had one son, Graham. Woodard was an active member of the Methodist Episcopal church.