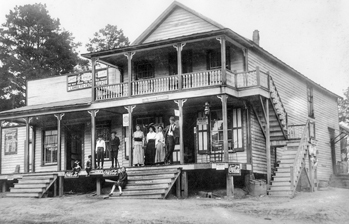 Country stores emerged in great numbers in North Carolina's rural, agricultural society following the Civil War, although some had appeared in the early 1800s. Person County, for example, had more than a dozen scattered stores by 1835. These commercial establishments grew out of farmers' need to obtain supplies beyond what they could produce themselves without making a daylong trip to town by wagon over rough roads. Farmers also needed a market for surplus produce. The number of stores in Wake County grew from 11 in 1867-68 to more than 80 by 1872, partially as a result of the 1867 crop lien law that allowed farmers to buy goods on credit, using a future cash crop as collateral.

Usually located at a crossroads, country stores had more than a commercial function, often serving as a post office, polling place, or militia muster site. Storekeeper Ben Wilder, at Mitchiner's Crossroads (Franklin County), also made mechanical repairs, barbered, pulled teeth, and, as a justice of the peace, performed marriages. John Allen Gunn's store in Oak Forest (Iredell County) boasted the first telephone switchboard in the vicinity. In whatever location, the country store became a place to exchange news, tell stories, read broadsides heralding upcoming events in the area, play checkers on an upended barrel, register complaints about politics and the weather, and perhaps drink whiskey.

Unlike stores in towns, which tended to specialize, country stores offered a wide range of merchandise related to everyday life, from straight razors to plows, timepieces to guns, eggs to overalls, fiddle strings to fishing tackle, seed to sorghum, and calico to coffee pots. Stocks were necessarily small because of the investment needed to maintain a deep inventory, and often merchants ran out of the most popular items. While the country storekeeper carried the risk of a large, wide-ranging inventory to meet the needs of farm families and sometimes experienced low sales, profits were generally good, about 35¢ on the dollar. 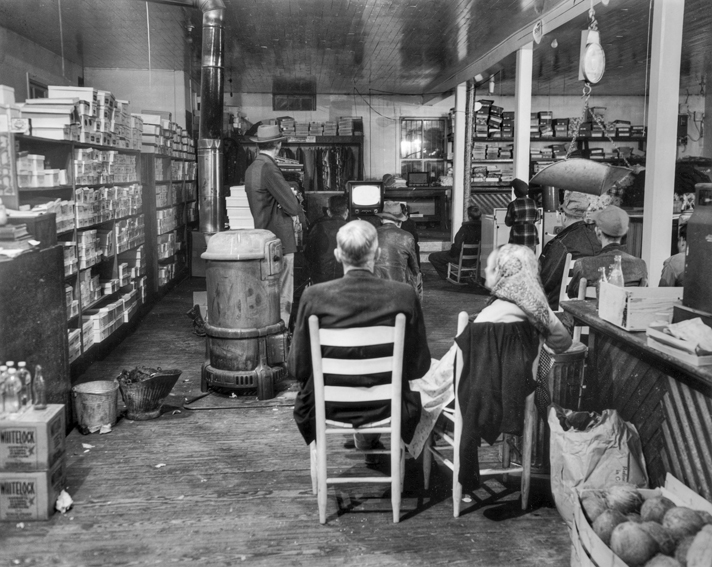 A gristmill, cotton gin, doctor's office, or blacksmith's shop often would be adjacent to a country store. In Graham County a store that began as a trading post in the 1840s expanded to include the post office and, with a cluster of other buildings, formed the nucleus of what became the town of Robbinsville. A Stokes County community took its name from a country store, Wilson's Store, and in Wayne County, Adams' Store at the crossroads became the name of a community that grew into the town of Adamsville.

When automobiles and paved roads began to cover the landscape, country stores fell into decline. By the end of the twentieth century, few had survived. A. D. Gibsons's store in Scotland County near Snead's Grove operated continuously from 1879 into the middle of the twentieth century. It changed from a place to tie up and water horses to a place with gasoline pumps for automobiles. Another store, dating from 1900 and operated since 1924 by the Bowman family, stands at the juncture of Highway 150 and Brown Summit Road in northern Guilford County. The plank road that once ran by its door and the railroad depot that stood across the road are gone, but the old pot-bellied stove remains inside. The Mast General Store in Valle Crucis, dating from the early 1880s, retains the atmosphere of an old country store and sells some of the same goods but has added such merchandise as ski boots and camping equipment. The country store has been elevated to museum status near Chapel Hill, where Patterson's Mill Country Store displays genuine artifacts and replicates the look and feel of stores that were once important fixtures in North Carolina's rural landscape.

Cary Durham store in Bynum, 1952. People have gathered to watch one of the first television sets in the community. Photograph by Roland Giduz. North Carolina Collection, University of North Carolina at Chapel Hill Library.