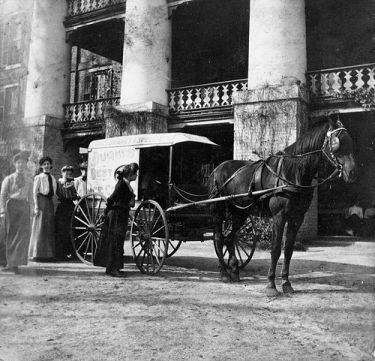 The date of the first appearance of horses in North Carolina is not known. One source suggests that in about 1585 Sir Richard Grenville's ship, en route to Roanoke Island and carrying Spanish mustangs picked up in Puerto Rico, ran aground off Ocracoke Inlet. Many horses were lost overboard or perhaps put overboard to lighten the ship's weight while repairs were being made. Another source tells of horses arriving in the 1500s on Spanish ships, escaping from shipwrecks or being put off deliberately when the ships returned to Spain. However and whenever they first came to North Carolina, the centuries that followed have seen an exciting and sometimes sad history for these wild horses, often called "Banker" ponies. Today, the descendants of these original horses, managed by the National Park Service, can be seen in a 180-acre pen on Ocracoke Island.

Not until around 1700 did horses begin to be kept by North Carolinians in substantial numbers. Before the advent of trains, tractors, and automobiles, horses were used to transport people and goods and to pull plows, stagecoaches, and wagons. The sport of horse racing also enjoyed tremendous popularity in the state from the colonial period until after the Civil War.

Equine populations in North Carolina continued to increase throughout the nineteenth century. By 1915 there were 182,000 horses in the state, with an average value of $130 per head. Although horses were still used for racing, this was more the exception than the rule. Horses primarily were farm animals, pulling plows and helping to grow the food to feed a state. Their numbers started to decrease in 1925, as they were replaced or complemented by tractors and other farm equipment that needed no horse power. The "horseless carriage," or automobile, helped cause this decline. By 1943, with World War II raging, the number of horses in North Carolina had fallen to 80,000 and was continuing to drop. This decrease brought about a plea from then commissioner of agriculture W. Kerr Scott: "If we are to continue to grow feed for meat production and food for our soldiers and for civilian consumption, it is imperative that we produce horses and mules with which to cultivate our crops."

After bottoming out, the North Carolina horse population began to rebound by 1955, thanks to a strengthening interest in recreational riding, racing, and events such as horse shows and rodeos. The equine industry suddenly entered a period of growth powerful enough to induce agriculture commissioner Jim Graham to appoint an advisory committee in March 1971 to help broaden the agency's activities related to the rising horse population, numbering that year at 113,000, mostly pleasure horses. By 1976 the North Carolina horse population was at 150,000. Nearly 200 horse events were staged during that year in the state, and in addition about 100 wagon train associations gathered, most of which used horses. By 1979 North Carolina's reputation as a producer of great horses was growing; in response, horse owners, breeders, and trainers formed the North Carolina Thoroughbred Breeders Association.

The number of horses in the state had increased to 220,000 by 1983. People had begun to look at the animals as more than work or pleasure creatures-they were also being seen as moneymaking investments and tax shelters. The early 1980s also witnessed the beginning of a great migration of horsemen and -women to North Carolina from all over the country, particularly from the North, due in part to the numerous major shows in and around the state and a climate that is hospitable to year-round training.

The Sandhills area of North Carolina is recognized as a leading center of the state's equine industry. For many people in this region, which encompasses Moore County and parts of Cumberland, Richmond, Scotland, and Harnett Counties, life revolves around horses. Southern Pines, the main hub of the Sandhills, is also the home of the Equine Research Center, a satellite of North Carolina State University's veterinary program, and the Walthour-Moss Foundation, a 2,500-acre nature preserve established in 1974 to be used by the public for the enjoyment of equine sports and nature hikes. The James B. Hunt Horse Complex, located in Raleigh, opened in 1983 and has been consistently booked with horse activities. It is home to the North Carolina State Fair Horse Show, one of the largest all-breed shows in the nation.

The need to help disseminate research-based information about horses to North Carolina horse owners led to the creation of the Regional Equine Information Network System in 1995. Established by Bob Mowrey, a specialist on horse husbandry at N.C. State University, this unique program rigorously trains volunteers across the state to assist horse owners in issues concerning horses or horse-related activities.

By the early 2000s there were an estimated 225,000 horses in North Carolina, with an equine industry valued at more than $500 million annually. While issues such as loss of area from development, zoning laws limiting horse ownership, and waste disposal problems in urban areas affect the industry, horses remain a vital part of North Carolina's economy and culture.