by Elizabeth Scheld Glynn and Douglas A. Wait, 2006

Fossilized remains of animal and plant life have been discovered at numerous locations in North Carolina, primarily in the sedimentary rock formations of the eastern coastal plain. Fossils often are exposed by erosion along stream and river banks, although some of the richest deposits have been found in commercial rock quarries. Relatively few fossils have been found in the older igneous and metamorphic rock formations of the piedmont and the Blue Ridge Mountains, since the intense heat and pressures of volcanism and metamorphism that occurred during and after the continental plates of Africa and North America collided about one billion years ago obliterated much of the plant and animal remains. 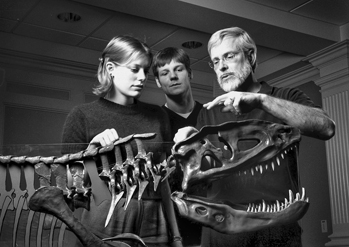 The oldest evidence of life found in North Carolina are impressions of wormlike animals and their burrows dated at about 620 million years old. These were found in rocks of the Carolina Slate Belt north of Durham. Two new species of trilobites living in the Cambrian period (roughly 540 to 500 million years ago) were discovered in the southern piedmont.

Dinosaurs and their reptile cousins of the air and water likely roamed the region that became North Carolina during the Age of Dinosaurs, between 245 and 65 million years ago. Fossil records of their presence have proven elusive, however. Because the region is heavily vegetated, the processes of soil formation often destroy fossils before they can reach the surface. Moreover, the state is somewhat densely populated, and some fossil-producing sediments are buried under cities and suburbs. Still, through careful study of the few fossils that have been found and by making educated guesses based on fossil evidence in other regions, paleontologists have been able to re-create a sketchy history of North Carolina's prehistoric residents.

During the Triassic period 230 million years ago, the earth's continents were joined as one supercontinent known as Pangaea. North Carolina lay nestled against present-day Mauritania on the west coast of Africa. The Atlantic Ocean basin was just beginning to form a rift between the land masses that eventually would account for the depletion of fossil records in later eras. The only fossilized bones that have been recovered in the state from this period are teeth of a small plant-eating dinosaur called Pekinosaurus. These fossils, some of the oldest in the world, were found in Triassic red basins around Pekin.

A mudstone quarry that straddles the Virginia-North Carolina border contains what may be the oldest sets of dinosaur tracks on the East Coast. The tracks, which are located near Leaksville Junction along the Dan River Basin, were made during the Late Triassic period by Grallator, a three-toed, bipedal carnivore, and by Atreipus, a primitive, quadrupedal dinosaur.

Despite scant evidence of their presence, it is likely that North Carolina hosted the full complement of dinosaurs that inhabited other parts of the East Coast, the American Southwest, and western Africa. All of these areas had similar climates and vegetation. After the finds of the Late Triassic, there is a sizable gap in North Carolina's fossil records. During the Late Triassic and most of the Jurassic periods, the Atlantic coastline was extremely high and eroding rapidly toward the west. As the coastline receded, fossil evidence along the East Coast was swept away with the erosion. Paleontologists believe, however, that until approximately 110 million years ago, dinosaurs of the North Carolina area were similar to those in Africa and on the North American continent.

The famous Allosaurus, Stegosaurus, and Apatosaurus likely made their home in the region, as did an intimidating predator, Acrocanthosaurus atokensis. Nicknamed the "Terror of the South," this voracious carnivore stood 12.5 feet tall and 36 feet long. Although no fossil evidence of this creature has been found in North Carolina, paleontologists have hypothesized its presence through fragments located in Maryland. The climate and vegetation in North Carolina during the Late Jurassic and Early Cretaceous periods was similar to that in Texas and Oklahoma, where four Acrocanthosaurus skeletons have been discovered. In 1997 the North Carolina Museum of Natural Sciences acquired a rare, nearly complete fossilized skeleton of Acrocanthosaurus, one of those unearthed in Oklahoma.

Only in the Late Cretaceous period did North Carolina's prehistoric inhabitants begin to leave a few substantial clues about their existence. At that time the eastern portion of the state consisted of low floodplains and swamps. The rivers in these floodplains deposited massive amounts of sediment along the shore of the Atlantic. Here, carcasses occasionally became bogged down in sediments and eventually were fossilized. Some of these ancient floodplains reach the surface in southeastern North Carolina within the Black River Group geological formation. Sites in this formation have yielded the only Cretaceous dinosaur fossils in the state.

Historically, the most productive site in the Black River Group is in Bladen County at Phoebus Landing on the Cape Fear River, although by the early 2000s it had been heavily mined by both professional and amateur fossil hunters. Identification of the fossils retrieved from this region has been difficult: it appears that no one has ever collected two bones from the same animal. Those that have been found are extremely weathered and worn, including specimens from ostrich and duck-billed dinosaurs, the teeth of small carnivorous dinosaurs, and several marine vertebrates.

Ironically, although the South has relinquished few of its prehistoric secrets, it was North Carolina's second state geologist, Washington Carruthers Kerr, who is credited with the nation's third dinosaur fossil discovery in the late 1860s. Kerr found these bones in a marl pit on Six Runs Creek in Sampson County. His find included an assortment of unidentified bones and a tail vertebra from Hypsibema crassicauda, a duck-billed dinosaur about which little is known.

Fossils dating from the current Cenozoic era that have been recovered in North Carolina reflect the rise of mammals following the extinction of the dinosaur about 65 million years ago. Fossils unearthed in a phosphate mine in Aurora include bones of ancestral species of the deer, horse, seal, walrus, and wolf, in addition to fossilized mammoth and mastodon bones. Assemblages scattered throughout the coastal plain in Brunswick, Jones, Onslow, and Pitt Counties contain fossilized remains characteristic of marine and estuarine habitats, including crabs, shellfish, sponges, fish, rays, sharks, turtles, and whales.

J. G. Carter and others, Fossil Collecting in North Carolina (1988).

David B. Weishampel and Luther Young, Dinosaurs of the East Coast (1996).

University of North Carolina at Chapel Hill geology professor Joseph Carter (right) and students examine the remains of an extinct reptile known as a rauisuchian. Carter and his students reassembled the 221 million-year-old skeleton in 1999. Photograph by Dan Sears. UNC-Chapel Hill News Services.