by Dr. John A. Diemer and Dr. Andy R. Bobyarchick
Dept. of Geography and Earth Sciences, University of North Carolina at Charlotte, 2005.

Our State Geography in a Snap: The Coastal Plain Region

Not all species listed are found in all parts of the region. Check the range map in the species profile for more information. 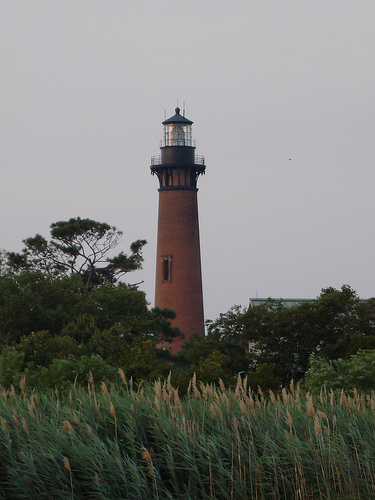 The Coastal Plain forms the eastern edge of North Carolina, making up about 45 percent of the state’s total land area.  It is bounded on the east by the Atlantic Ocean and on the west by the Fall Line, a broad zonewhere the soft rocks of the Coastal Plain meet the hard crystalline rocks of the Piedmont.  The Coastal Plain varies in width from 100 to 140 miles.  It rises gently in elevation to the west, from about sea level at the coast to as much as 500 feet in the Sand Hills district.

Wetlands are a dominant feature of the North Carolina Coastal Plain.  Wetlands are defined as “...those areas that are inundated or saturated by surface or ground water at a frequency and duration sufficient to support, and that under normal circumstances do support, a prevalence of vegetation typically adapted for life in saturated soil conditions.”  That is, the descriptive characteristics of wetlands are their hydrology, hydric soils and wetland plants.  The fact is, however, that they are creations of topography that causes land areas to drain poorly, whether because of terraces left along ancient shorelines or due to flat lying deposits on flood plains.


Originally North Carolina had about 10.3 million acres of wetlands.  As Figure 4 shows, the vast majority of this acreage lies on the Coastal Plain.  Wetlands on the Piedmont or in the Mountains tend to lie along streams whereas those near the coast are products of that region’s low elevation.  About half of the state’s original wetlands have been drained and converted to forestry, agriculture or urban uses.  Most of the remaining inventory is in freshwater wetlands.  About 240,000 acres originally were in salt marshes and more than 85 percent of that acreage remains undisturbed.  Wetlands can provide valuable wildlife and aquatic life habitat, shoreline stabilization, and flood storage.  About two-thirds of North Carolina’s rare, threatened and endangered species of plants and animals live in wetlands.  Wetlands often provide crucial water quality benefits by trapping sediment, nutrients and toxic pollutants by filtering them from urban or agricultural runoff before they enter streams.

In June, 1998, a Federal court temporarily lifted controls on wetland draining and conversion. Between then and March, 1999, about 12,000 acres were drained without permits. Since that time about 6,400 of those acres have been restored to their original condition. The NC Division of Water Quality resumed permitting with stricter application of the legal requirements in March, 1999. Table 1 summarizes the wetlands acreage that was permitted for drainage by the NC Division of Water Quality between 1992 and 2001. The large acreage on the Coastal Plain in 1997 was due largely to development of the Buckhorn Reservoir. The large removal in 1998 was attributable largely to the expansion of the Texas Gulf phosphate mine in Aurora. The sharp drop in acreage beginning in 1999 reflects the more rigorous enforcement by the NC Division of Water Quality.

The Coastal Plain is sub-divided into two major sub-areas.  The Outer Coastal Plain, or Tidewater, lies closest to the ocean, is extremely flat, averages less than 20 feet above sea level and contains large swamps and lakes indicative of poor drainage conditions.  Eleven of the 12 counties that have 55 percent or more of their areas in wetland soil areas are in the Tidewater section.  Streams on the Outer Coastal Plain are brackish and subject to tidal fluctuations in level.


The Inner Coastal Plain is higher in elevation and better drained.  Locally, however, there are distinctive wetlands or upland bogs known as Pocosins.  There are also the Carolina Bays, elliptical lakes of unknown origin.  Many pocosins originated as Carolina Bays which have since filled with vegetation and sediment.


The Fall Line marks the boundary between the Coastal Plain and the Piedmont.  Rivers that rise in the Blue Ridge Mountains flow across the Piedmont and enter the Coastal Plain at the Fall Line.  This boundary is characterized by steep river gradients and rapids. Downstream of the Fall Line, the rivers flow to the southeast and have carved broad, low valleys in the soft, easily eroded sediments of the Coastal Plain.  There the rivers have gentle gradients and are flanked by swamps and marshes.  They are generally navigable all the way up to the Fall Line, an important factor in the early settlement of the region from the coast.  A distinctive feature along the Fall Line is the Sand Hills (Figure 1).  These deposits originally formed as wind-blown sand dunes.  They are permeable, quartz-rich deposits that produce well-drained, acidic soils that are deficient in plant nutrients.


The coastal margin north of Cape Lookout is a “drowned coast,” in which  the sea level rise associated with the end of the last Ice Age and the continual melting of the ice caps has caused the ocean to invade the lower reaches of river valleys. This drowning has produced large embayments such as Albemarle and Pamlico Sounds.  Associated with these embayments is a string of barrier islands that are separated from the mainland by as much as 20 miles, the Outer Banks (Figure 5).  These linear islands apparently were formed as sea level rose over old  beach ridges and sand dunes.  Continued rises in sea level, accompanied by wave and wind action, cause these islands and their lagoons to slowly move inland.  This steady inland migration, known as barrier island rollover, plus the exposure to hurricanes and other storms, makes the many developments along these attractive shores highly vulnerable to damage and destruction.  The most famous example of this is the historic Cape Hatteras lighthouse. This lighthouse has been moved farther inland to protect it from erosion.

The lagoons and sea marshes along the coast near the Outer Banks are vital parts of the coastal ecosystem.  The shallow shoals and sand bars that are associated with barrier islands are constantly shifting in location.  They have presented sailors with very hazardous waters in which to navigate and this stretch of the Atlantic coast is so littered with shipwrecks that it is known as “The Graveyard of the Atlantic.”  These dangerous waters also made it difficult for early explorers and settlers to land on the northeast coast of North Carolina.


South of Cape Lookout is the Cape Fear Uplift, where the coast was gently folded upwards.  Instead of drowning the river valleys, the uplift exposed an even coastline, along which have formed long stretches of broad beaches.  The deep embayments found to the north are not present, nor are extensive barrier islands.  Historically, this length of coast was somewhat more accessible, despite the Frying Pan Shoals that make the mouth of the Cape Fear River, the entrance to the port of Wilmington, dangerous and which requires dredging to maintain a navigable channel.   Today this region is known for its miles of wide, sandy beaches that extend southward through the Grand Strand of South Carolina.

you have nothing that can

I'm sorry you had difficulty locating biographies by region.  NCpedia has biographies of important NC people organized by county.

If you go to the following link, you'll reach a page that allows you to look at biographies for each county and there is a map of the state's regions to help you identify counties within the region.  The Coastal Plain is a large region so you'll be able to locate many biographies.

Just opening this link, and will wait to make comment about liking or not (smile). My question to "identify counties". Historically by the county being implemented, drawn and reshaped over the history of designing; where would one go to find the historic documentations of the Indigenous Tribes? Also when the counties were designed did the data of the communities follow into the new county? Thank you for responding.

Thank you for visiting NCpedia and taking time to post your question.

It sounds like there are a few parts to your question.

1. Generally, as new counties were created in North Carolina the county records existing up to that point would remain with the original parent county.  Over time a number of counties have transferred some of their records to the State Archives of North Carolina. Please visit this link on the State Archives website for more information and publications related to county records in their custody:  http://www.ncdcr.gov/archives/Public/Collections/GovernmentRecords.aspx#county

You may also be interested in resources on the history of county formation in North Carolina.  NCpedia has:

--informational pages for each of North Carolina’s 100  counties  http://ncpedia.org/geography/counties

2.  If you are looking for specific historic documentation related to North Carolina tribes, you may want to the contact individual tribes.  The Commission of Indian Affairs (at the State of North Carolina Department of Administration) webpage has a listing of all tribes recognized by the state with tribal headquarter contact information -- http://www.doa.nc.gov/cia/tribes.aspx.

3.  Here are some additional information resources on Native American history and heritage in North Carolina:

I hope this helps.  If you have additional questions about North Carolina history and collections, please feel free to post another comment on NCpedia.  You can also contact Reference Services at the N.C. Government & Heritage Library.  Here is a link to the website with information about the library’s collections, services, and contact information -- http://statelibrary.ncdcr.gov/contact.html.

This page really is helping

This page really is helping me with a social studies project! Thank you so much for posting so much information on the internet! It is really helpful! I hope many people like and read the information because it really helps!

A question: Could you make a section for JUST Coastal Region? That would be really helpful! The information is perfect! Thank you!
Giving lots of credit!!

"okay" nice perfect for my

"okay" nice perfect for my project

I HATE THIS SITE!!!IM LOOKING

Just let us know what facts

Just let us know what facts you're looking for, and we'll help you.