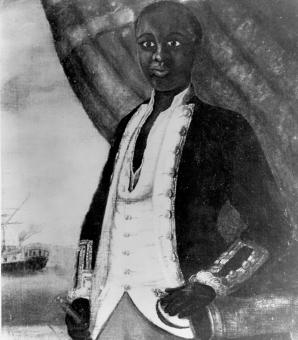 Question #2: Were there any lead mines in Bute County, NC used to make bullets, cannon balls, etc. during the Revolution? Who was in charge?

Thank you for visiting NCpedia and for sharing your questions.

I have forwarded your inquiry to the Reference Team of the SLNC Government & Heritage Library. You should receive an email shortly providing additional assistance.

I am researching my husband's

I am researching my husband's ancestry and have found that Alexander C Cooper (1754-1844) served as a private in the North Carolina Line during the Revolutionary War. He lived in Rutherford County. I am wondering if you can suggest a source to determine a more specific time period that he would have been serving.
Thank you

Thank you for visiting NCpedia! There are several resources you may wish to consult that could provide further insight into your husband’s ancestry.

I hope these resources help! If you have any questions, please reach out to the library’s staff at slnc.reference@ncdcr.gov.

I find the information very

I find the information very interesting and admirable of a state in the US.

Hello, I am in England and

Hello, I am in England and trying to find out about Colonel John Gregory, who served in the Camden County Regiment, under the command of Brigadier General Isaac Gregory. I can find a lot about the latter, but it is not him I am focussing on. Colonel John Gregory is mentioned on this website: https://www.carolana.com/NC/Revolution/nc_camden_county_regiment.html I am especially interested to know his age in 1781 and whether he was ever wounded in battle? I have in mind the battle of Black Swamp, on 26 June 1781, at which battle General Isaac Gregory was present, and, so, most likely, was John Gregory. If John Gregory was wounded there, or at any other time, then my long. long search will be over. I do hope you will be able to help me. Kind regards, Anne Ammundsen

I've been watching the

I've been watching the Netflix series "Outlander" and the current setting is NC, where a Scottish settler has just been issued a draft notice from the British. After filming is complete, the series will continue in 2022 and we'll know the outcome. I'm curious to know whether your organization provides research materials or other assistance to this effort. I really like this site; thank you for the historical information you provide.

OOPs-- In reference to the

OOPs-- In reference to the comment mentioning Joseph Boon, my ancestors name is Sander(s)/ Saunders/Sandy Burnett he lived in Johnston County, N.C. any information for him would list that he was born about 1745 and may list that he was born in North Carolina but he was actually born in Virginia. Thanks.