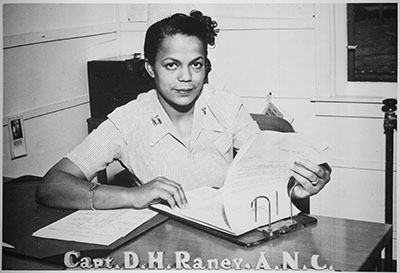 Della Hayden Raney Jackson was born in Suffolk, Virginia on January 10, 1912, the 4th of twelve children born to George H and Willie V. Raney. Raney chose to attend nursing school in North Carolina and became a proud graduate of Durham’s Lincoln Hospital School of Nursing, class of 1937. After graduation, she worked as the operating room supervisor at Lincoln Hospital. When the United States entered World War II, Nurse Raney was anxious to serve her country and applied for a position in the Army Nurse Corps. Initially her application was denied due to her race.
Until 1941, the Army only employed white nurses. Despite this rejection, Nurse Raney persisted in her efforts to become an Army nurse. A nurse needed the endorsement of the American Red Cross to be considered for military service. She wrote in 1983 :
”When I entered nursing more than forty years ago, it was serious business with me. It was a commitment to give my life for a cause – that of caring for those who were ill …It was this strong desire to elevate my profession that led me to volunteer for military service in 1940 with the U.S. Army Nurse Corps. Getting accepted by the Red Cross was difficult for graduates of black schools of nursing in the south, but I persisted in overcoming this barrier to the point of writing Miss Mary Beard, who at that time was director of nursing for the American Red Cross, telling her of my desire to serve my country and practice my profession. Miss Beard replied with my membership card, certificate and pin."
Nurse Raney’s determination paid off. In April, 1941 she became the first African American nurse accepted into the US Army Nurse Corps, at the rank of 2nd Lieutenant.
Because of the war time emergency, in January 1941, the Army opened its Nurse Corps to African American nurses but established a limit of 56 nurses. African American nurses were only allowed to care for African American service men. In April 1941, twenty four African American nurses were assigned to Camp Livingston, Louisiana and another twenty four to Fort Bragg, North Carolina, The Army had recently established segregated African American hospital wards on these two bases to treat ill and injured African American soldiers. Nurse Raney was chosen to lead the Fort Bragg nurses.
After serving six months at Fort Bragg, Nurse Raney was given the chief nursing examination. She passed and was promoted to First Lieutenant. In March of 1942, 1rst Lieutenant Raney led the first five African American nurses assigned to the Tuskegee Army Air Field in Alabama, home of the Tuskegee Air Men, becoming the first African American ever appointed as a Chief Nurse in the U.S. Army Nurse Corps. The quota for African American nurses rose to 160 in 1943 and was dropped all together in 1944.
In June of 1944 she transferred again to become Chief Nurse at Fort Huachuca, Arizona and shortly moved on the Camp Beale, a new Air Force facility created out of the rolling hills of central California. Camp Beale had a hospital that included 100 buildings and one thousand beds.  Raney was promoted to Captain in 1945 and in 1946, Raney was promoted again to the rank of Major and served an extensive tour of duty with the occupation force in Japan.
When she returned to the United States, she returned to Camp Beale, as Director of Nursing for the base hospital. Major Raney retired in 1978 after earning the highest rank of any African-American nurse who served in World War II. When the war ended in September 1945, just 479 black nurses were serving in an Army Nurse Corps of 50,000 because of the rigid quota system imposed by segregation.
Della Raney Jackson also received a doctorate from columbia University.
She passed away on November 23, 1987 in Detroit, Michigan. She was married to Andrew L. Jackson.