Shellfish is the popular name for edible mollusks and crustaceans, but fewer than a dozen varieties are caught in sufficient quantities in North Carolina's sounds and offshore waters to be considered part of the state's commercial fishing industry. Though the 2004 catch reported by the North Carolina Division of Marine Fisheries included small numbers of whelks, conchs, scallops, and even stone crab, respectable quantities of oysters, clams, and blue crabs-especially blue crabs-dominate shellfishing in North Carolina. In 2004 more than 76 percent of the state's shellfish poundage was in hard-shell blue crabs. 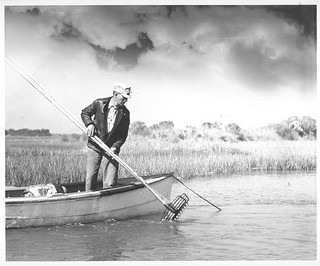 Blue Crabs. The Atlantic blue crab (Callinectes sapidus) is the only crab in North Carolina waters with significant commercial value, although other species, such as the spider crab and calico crab, abound. Blue crabs are generally harvested in the state's sounds, although periodically they are seen in the wash of incoming tides on beaches. The largest populations live in the Albemarle and Pamlico Sounds. Most desirable are the males, or "jimmies," since they yield more meat. Immature females, however, form the basis for "she-crab soup," a popular dish on coastal restaurant menus. Commercially, blue crabs are harvested through the use of pots marked with buoys. Crabs that have just shed their shells in the process of growth are called "soft-shell crabs." Considered delicacies, they are especially commercially valuable in the spring and early summer months.

Historically, crabs were caught and eaten by native peoples and have been noted as a food resource from the earliest European records. Englishmen involved in the Roanoke voyages of the 1580s, including Ralph Lane and Thomas Harriot, commented on the presence of "sea crabbes" that the Native Americans sought for food. In 1709 John Lawson's A New Voyage to Carolina described what were almost certainly Atlantic blue crabs: "The smaller flat Crabs I look upon to be the sweetest of all the Species. They are the Breadth of a lusty Man's Hand, or rather larger. These are innumerable, lying in most prodigious quantities, all over the Salts of Carolina."

From the colonial period to the early twentieth century, blue crabs were abundant but their use was confined to local gathering for food or fishing bait. Extracting their steamed flesh for packing and canning was a labor-intensive process, and it was difficult to preserve the live crabs and their highly perishable "picked" flesh for transportation to far markets. By the mid-twentieth century, however, demand for the blue crab, combined with faster transportation and better refrigeration techniques, had commercialized crabbing in North Carolina. Although catches in the early 2000s have been smaller than in years past-in 2004 more than 34 million pounds were harvested, with a value of $23 million-the blue crab remains an important seafood resource for the state.

Clams. The clam has been an important food source from coastal waters since prehistoric times. Chroniclers of the Roanoke voyages of the 1580s noted the bounty of shellfish, including clams and other bivalved mollusks, in North Carolina's waters. The state has many edible clam species. Those of greatest commercial value historically have been the northern quahog (Mercenaria mercenaria) and the soft-shell clam (Mya arenaria). Both are important commercially, the former as "littleneck" or "cherrystone" clams, usually sold live in the shell; and the latter for canning. Techniques for harvesting clams have changed little since the nineteenth century. Clams are taken with rakes or by hand in shallow water. They are also caught with tongs and larger "bull" rakes in deeper water and are dredged in Onslow and Carteret Counties. 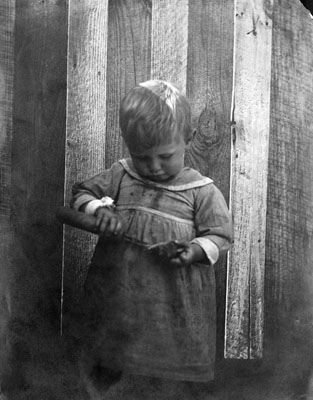 The market for North Carolina clams is a relatively recent development due primarily to the fact that the state's waters were far removed from major markets. In the twentieth century, coastal clams were harvested to supply restaurants, wholesale seafood dealers, and the general public. The clam harvest peaked during the 1980s. In 1989, for example, a total of 1.2 million pounds of clams were harvested, with a dollar value of $8.3 million. By 2004 both the size and value of the catch had declined to 548,628 pounds valued at $3.4 million. According to the N.C. Division of Marine Fisheries, the clam fishery has felt the effects of increased fishing pressure, poor water quality, and habitat loss. Experiments with clam "farming," or cultivation in shallow sound waters, have proven successful. In the 1990s at least one Hatteras Island venture tied clamming to the tourist economy in a "rake your own clams" business for summer visitors. North Carolina clams continue as primarily a locally used resource, and fresh clam chowder and fritters remain welcome staples on the menus of coastal restaurants.

Oysters. In North Carolina's estuarine waters, oysters (Crassostrea virginica) have aroused, but not satisfied, public and private economic hopes and expectations for well over a century. When overfishing resulted in the depletion of the New England oyster beds by the beginning of the nineteenth century, oystermen began moving south. In 1822 North Carolina closed its waters to out-of-state oystermen and forbade dredging by use of drags, scoops, or rakes. Only hand tongs were legal, and North Carolina oystermen were permitted to continue shipping pickled oysters to the West Indies in quantities not to exceed 60 gallons in any one vessel.

In 1858 the state established a procedure by which citizens who were willing to enclose up to 10 acres of suitable estuarine ground and seed it as an artificial oyster bed could secure perpetual fishing rights to it by special license from their local courts. Over the next 30 years, oystermen in Carteret, Dare, Hyde, Onslow, and Pamlico Counties created 52,000 acres of licensed private oyster gardens. After the Civil War, when North Carolina was trying to diversify the foundations of its struggling economy by exploiting its natural resources, it sought to develop its oyster industry. Oyster canneries and shucking houses were established in Elizabeth City, Washington, New Bern, Morehead City, and Beaufort in the late 1880s. North Carolina waters attracted northern oyster pirates. The struggle to expel the pirates in 1890 and 1891 was North Carolina's very pale reflection of the notorious, ongoing, and bloody "oyster war" in Chesapeake Bay. The oyster law of 1891, by which the pirates were forced out, provided a patrol vessel, still maintained today, to police oyster fishing in the state's waters. Also established in 1891 was a supervisory and regulatory board of shellfish commissioners that has evolved into the present-day Marine Fisheries Commission. 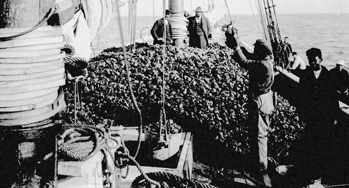 Though they were unrecognized by most in the state, serious problems arose regarding the oyster industry. The state's oystermen had been harvesting virgin stocks that had taken centuries to develop; the rate of oyster population replacement and increase was far lower than supposed, and the species was declining throughout its range. In addition, a series of typhoid outbreaks in 1883 and 1924, traced to contaminated Chesapeake oysters, resulted in a public scare that nearly halted the market in raw oysters. By 1953 shrimp had replaced oysters as the consumer's shellfish of choice, and oysters have never regained their lost ground. After a record oyster take of 1.8 million bushels in 1902, the annual North Carolina take spiraled downward, with 66,000 bushels in 1976 and 48,707 bushels in 2001.

Various steps have been taken to remedy the situation. Millions of bushels of seed were planted in the late 1930s by workers in various New Deal agencies in addition to the state's ongoing seeding program. An experimental oyster farm was established five miles out of Beaufort on North River in 1940. Numerous biological, ecological, and maricultural studies have been conducted over the past 50 years in the hope of finding solutions to the problems affecting the state's oyster industry. The recommendations of the Blue Ribbon Advisory Council on Oysters' 1995 final report form the basis for a new management program.