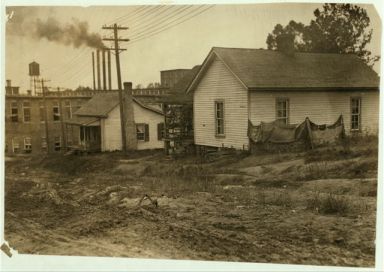 In the late nineteenth century, numerous company-owned mill villages developed around the textile mills of North Carolina and other southern states. Typically, one- and two-story timber houses were constructed in rows with small yards, brick pier foundations, tin roofs, porches, and a simple functional design. The size of the houses varied from three to six rooms. Workers rented their houses from the company for ten cents a week per room, with deductions made from the renter's paycheck. The company provided water, coal, and electricity without charge.

Mill owners also built churches, parks, swimming pools, stores, offices, and libraries for employees and families living in mill villages. They sent social workers to organize clubs for all age groups, to visit homes, and to provide transportation to out-of-town hospitals. Companies staged outdoor movies in the summer and held special events and band concerts. Companies also provided a Christmas tree to each household with a gift for every child, often arranged travel and educational tours, and even supported the town baseball team and gave the players (who were also mill workers) paid time off for the season's demands.

By 1900 the vast majority of North Carolina's mill workers lived in mill villages. Although offering some advantages to the workers, these villages were generally more beneficial to mill owners. By keeping their workers content, dependent, and loyal, owners were able to maintain total control of their workforce and ensure the economic success of the mill. The lives of workers in mill towns, in fact, were almost completely dictated by the schedule and requirements of the company factory. Because of the textile industry's reliance on unskilled labor, many North Carolina mills employed entire families, including women and children who were age 12 and above. The workday was long, usually 10 to 12 hours, mill hands worked six days a week, and the work conditions were harsh and unhealthy. Often very young children assisted older family members with simple, easy work in the factories until they were old enough to take on heavier jobs.

While many mill villages were abandoned and demolished as the mills closed, some eventually grew into larger towns. Kannapolis, near the Cannon Mills site in Cabarrus County, and Cramerton, which developed around May Mills in Gaston County, are two such towns. Glencoe Village, a 105-acre site in Alamance County, and Edenton Mill Village in Chowan County were rehabilitated by Preservation North Carolina and the houses sold for restoration as single-family homes. (Both sites are listed in the National Register of Historic Places.) 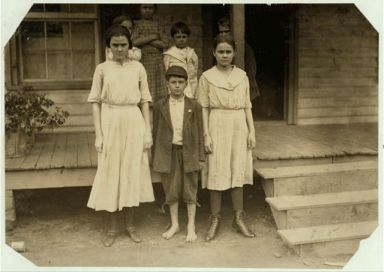 Despite the many hardships experienced by North Carolina's mill workers, the textile industry proved to be resistant to most labor union activities in the state. The first major labor union to focus on North Carolina's textile industry was the American Federation of Labor in 1898, followed by the United Textile Workers Union in 1919. Several strikes, such as the violent Gastonia strike of 1929, organized primarily by the National Textile Workers Union, did little to improve textile working conditions but succeeded in turning the plight of the state's mill workers into an international cause. Federal labor laws passed as part of the Roosevelt Administration's New Deal, particularly the Fair Labor Standards Act of 1938, addressed some of the most egregious workplace practices of textile mills, especially those involving child labor. Further unionization attempts throughout the first half of the twentieth century included the Harriet-Henderson Mills strike of the late 1950s, which again resulted in violence but little progress for North Carolina textile workers.

The adoption of man-made fibers introduced profound changes in North Carolina's textile industry. Rayon, created in 1855 by a Swiss chemist, was the first of these new products. A regenerated wood cellulose product, rayon was produced commercially in France and later in the United States in 1910. Other important synthetic fibers developed during the first half of the century included acetate, first produced by the Celanese Corporation in 1924; nylon, first produced commercially by DuPont in 1939; vinyon (1939); saran (1941); metallic fibers (1946); modacrylic, developed by Union Carbide in 1949; olefin (1949); and acrylic (1950). Nylon, the most popular and widely utilized of these new fibers, was used to make sewing thread and women's hosiery. During World War II, nylon replaced silk in tires, tents, ropes, and various military supplies. North Carolina provided more textile products to the military than any other state, in the form of blankets, sheets, clothing, tents, bandages, and parachutes. At the end of the war, nylon also became popular in carpeting and automotive upholstery. Another popular fiber has been acrylic, introduced by DuPont in 1950 as a substitute for wool. The first wash-and-wear products consisted of 60 percent acrylic and 40 percent cotton. 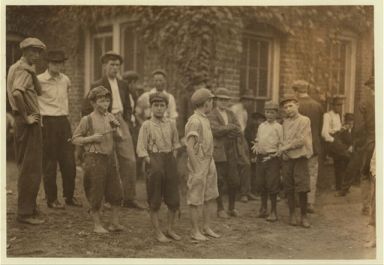 Burlington Industries, Inc., led by J. Spencer Love, became the driving force behind the growth of synthetic textiles. Love founded the company in 1923, and it grew through a strategy of acquisitions and mergers and through the adoption of synthetic fibers, especially rayon in the years before World War II. The extraordinary demand of the war years enabled Burlington to expand as a supplier of more than 50 products for the government. Burlington's corporate growth continued in the 1950s and the early 1960s, as revealed in the company's statistical profile for 1967: 130 plants in 15 states and 11 countries, with 83,000 employees. In North Carolina that year, 40,000 people (almost 20 percent of all textile employees in the state) worked at Burlington's 78 plants in 47 communities. No other industrial enterprise was as pervasive in the state.

In the 1970s, new environmental regulations, focused on polluted wastewater and air produced by textile manufacturing, and labor union activity, centered on low wages and poor working conditions, impacted the state's textile industry. Brown lung disease (byssinosis)-an asthma-like narrowing of the air passages caused by chronic inhaling of particles of cotton and other substances prevalent in mills producing yarn, thread, or fabric-was identified as a deadly occupational hazard for thousands of North Carolina's mill workers. During this period, the J. P. Stevens Company lost several court cases related to its labor policies and became known in labor and legal circles as the nation's "number one labor law violator." Meanwhile, the lure of low capital and wage costs began to drive textile manufacturing into Asia, South America, and Central America. Between 1974 and 1984, textile imports nearly tripled, while at the same time, efforts to strengthen the U.S. dollar meant that American goods increased in price. By the mid-1980s, imports accounted for 43 percent of the clothing bought in the United States. By 1990 the trade imbalance in apparel had grown to nearly $25 billion.

The textile industry tried to rebound through legislation and automation, spending, for example, a total of $1.9 billion on new equipment ranging from robots to high-speed weaving machines that use jets of water or air instead of shuttles. In the late 1970s and early 1980s Burlington reinvested 85 percent of its cash flow into new equipment, $1.5 billion over one seven-year period. Some companies remained viable by emphasizing specialty products that competed less with imports. Collins & Aikman turned to automotive carpeting, furniture upholstery and commercial carpeting. Smaller family- and worker-owned companies often managed to stay afloat through such specialization. The industry in 1983 launched a promotional campaign called "Crafted with Pride in the U.S.A." with help from several major retailers, urging Americans to buy clothing bearing those labels.

Continue Reading >>Textiles- Part 4: Decline, Consolidation, and the Future of Textiles in the State

Some of the housing conditions of the workers in Cannon Mills, Concord, N.C., to contrast with the homes and gardens sometimes shown from the "show mills" of the state. Concord, NC, 1912. Image courtesy of the Library of Congress. Available from http://www.loc.gov/pictures/item/ncl2004003652/PP/ (accessed October 2, 2012).

The three on the ground work in the Cannon Mills, Concord, N.C. The boy "Otie Honeycott" (his mother could not spell his name) said he had been doffing two years in the Cannon Mill, Concord, NC, 1912. Image courtesy of the Library of Congress. Available from http://www.loc.gov/pictures/item/ncl2004003076/PP/ (accessed October 2, 2012).

A few of the young boys working in the Cannon Mills, Concord, N.C., but only a few of them and not the smallest, Concord, NC, 1912. Image courtesy of Library of Congress. Available from http://www.loc.gov/pictures/resource/nclc.02654/ (accessed October 2, 2012).