Vine Hill Academy in Scotland Neck was chartered in 1809 by the North Carolina legislature and became one of the most successful schools in the eastern part of the state. Its first trustees were William Ruffin Smith, James Smith Jr., Peyton Randolph Tunstall, Marmaduke Norfleet, Josiah Nelms, Willis Powell, John Anthony, and Simmons J. Baker. The school apparently took its name from Vine Hill, Baker's home in Scotland Neck. 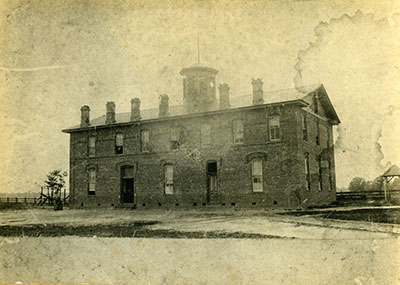 In 1810 the legislature passed an act enabling Vine Hill's trustees to raise $500 by lottery for the school. By 1837 there was a separate building for the female department, which was under the direction of a "Miss Rowan" and a "Miss Hanks" from New York. The available courses for men at the time were listed as Greek, Latin, rhetoric, logic, algebra, geometry, navigation, and surveying. Courses available to women included ancient and modern history, universal geography, chemistry, astronomy, moral and intellectual philosophy, natural theology, elements of elocution, French, botany, and drawing. The female department of Vine Hill operated only intermittently and was suspended in 1847 for want of patronage, according to school records. In succeeding years it operated on an irregular schedule.

During the Civil War, many Vine Hill graduates served with the Confederate army, although the school managed to stay open during and after the war. After a substantial system of public education began in North Carolina in the early twentieth century, Vine Hill was closed and a new public graded school opened on the site. When Scotland Neck High School closed as a result of school consolidation in the 1980s, there was some question as to who would own the property, since the original deed had specified the land was to accommodate a school or other public use. Town offices were moved into the renovated school rooms, and other rooms were used for public purposes, thus maintaining the civic purpose of the deed.