Reconstruction was one of the most violent, transformative periods in American history. The South changed more in twelve years than it had in the 18th century. New state governments built railroads, sponsored industry, and granted new rights to African American and Black people. After Reconstruction ended in 1877, the South’s new leaders developed a historical story about who was in charge during Reconstruction. This story was again told by later historians such as Claude Bowers and became the dominant story of the time. One of the terms used in this narrative, carpetbaggers, is a contested term today. It was used to refer to men and women who came from the North to participate in Southern society. This insulting term was a reference to the large bags that many people brought with them, bags they allegedly filled with stolen money and goods. Southern Democrats believed that Northerners who came south were corrupt and only interested in stealing money through taxes and bribes. By focusing on corruption, the traditional narrative about carpetbaggers ignores many of the other attributes that made the group one of the most influential in Southern history.

After the Civil War, the Southern economy was in tatters. Hundreds of thousands of Southern men were dead, and thousands more were injured from the war. Many of the region’s crops, buildings, and railroads were destroyed in the war. The war helped lead to end of slavery in the states that had seceded. This meant that many people who had profited from the labor of enslaved people had less wealth than they did when slavery was legal. Southerners needed outside help to rebuild roads, bridges, and towns and bring prosperity to the region.

Immediately following the war, many men and women came from Northern states eager to rebuild and improve the South. Some were former soldiers who had been stationed in the South during the war and were familiar with the people and climate of the region. Others came seeking new business opportunities and a new life. No matter what their reason for moving South, these transplants were not greeted with Southern hospitality. Southerners claimed that Northern transplants did not intend to help the region and would only stay in the South long enough to fill their carpetbags with as much as they could steal.

Some carpetbaggers did exploit the South. A number of them participated in the corrupt politics of the time. One example of an dishonest carpetbagger was John T. Deweese. Deweese came to North Carolina from Indiana after the war and became a judge and congressman. Deweese was dogged by allegations of corruption throughout his time in N.C. In 1870, he resigned from Congress before he could be expelled for taking a bribe. Journalist Jonathan Daniels later wrote, “[Deweese] was ridiculous, offensive and demanding even in the eyes of his carpetbag associates – yet his picture somehow survives as the portrait of them all.”

Many other people called carpetbaggers were noble and genuinely interested in aiding the South. One was William H. Snow, who came to Guilford County from Vermont after the Civil War. Snow started a successful company that made wooden blocks for textile factories. His son, E.A. Snow, became a founder of the High Point furniture industry.

Arguably the most famous North Carolina carpetbagger was another morally upright leader. Albion W. Tourgee came to N.C. from Ohio in 1865. He served as a judge and helped rewrite North Carolina’s constitution in 1868. Tourgee strongly supported equal rights for black people and was criticized by many white North Carolinians. He left the state in 1879. Tourgee later gained fame for arguing on behalf of Homer Plessy in the Plessy v. Ferguson "seperate but equal" case.

Many carpetbaggers left North Carolina at the end of Reconstruction because they felt intimidated and shut out of political power. Many others stayed and became vibrant, constructive members of Southern society and contributed to the state of North Carolina.

“Man with the Carpet Bags” Cartoon

Condemnation of John T. Deweese by the House of Representatives

The Two Platforms Political Card, from Library of Congress. 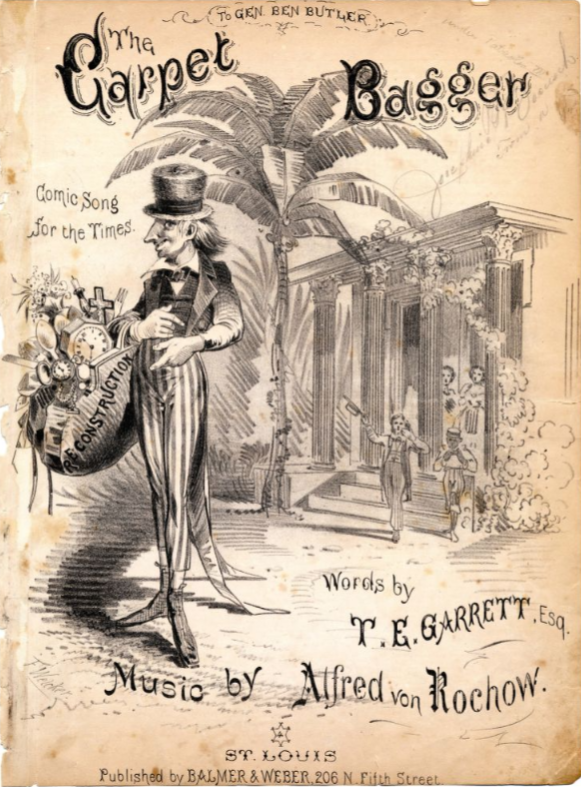 Sheet music cover and lyrics of the "comic song" called "The Carpetbagger." Cover shows a drawing of a carpetbagger with the spoils of Reconstruction in a large carpetbag. From Tennessee Virtual Archive.