Life on the Land: The Piedmont Before Industrialization

In the 1850s, subsistence agriculture dominated the Southern Piedmont. Although a handful of large plantations dotted the region, most farmers worked small pieces of land, raising grains, vegetables, and animals to feed their family, and bartered with neighbors for most of the goods they could not produce themselves. On the eve of the Civil War, however, railroads began to enter this backcountry, making the land accessible for commercial agriculture and industry.

The Civil War, of course, abolished slavery, breaking up the large plantations into small plots, still owned by wealthy white families but now worked by African American and white sharecroppers. Crop liens, agreements in which farmers who needed land and credit to buy supplies worked property owned by planters who needed labor, transformed the agricultural economy. Merchants also gained power as a result of the liens, providing supplies and lines of credit to farmers in exchange for a share of their crops. Often, because the merchants charged high interest rates, farmers had no choice but to plant cash crops such as cotton and tobacco, shifting their focus from food to commercial production. As a result, farmers began to buy instead of grow more of the crops their families needed for survival, necessitating even further indebtedness to merchants. Fence laws, which kept farmers from allowing livestock to roam land that they did not own, and higher taxes further decreased the limited resources of small farmers and made them increasingly dependent on the market economy. When crop prices fell in the 1870s, 1880s, and 1890s, farmers plunged into deepening debt.

Of course, not all farmers experienced this difficult period in the same way. Farmers who owned large tracts of land could subdivide it, rent pieces of it to others, and profit from the sharecropping system that others experienced more negatively. Families who owned their own small farms could remain more independent and fare better financially than sharecroppers. The changes in agriculture, however, touched all Piedmont farmers to one degree or another, gradually eroding the ability of farm families to remain on the land.

Farm families did not take these changes lying down; instead, they tried to work harder, barter with neighbors, and pull together to continue their familiar and independent rural lifestyle for as long as possible. Women and children increased their work in the fields to help their families tend more land for greater income. Communities bound themselves together through ties of kin, friendship, churchgoing, and social activity. Neighbors helped one another with farm work and when illness or hard times befell local families. Rural ties that had bound communities for generations remained strong, even as the power of merchants was pushing rural families to the financial breaking point.

From farm to factory

During these hard times for farm families, merchants experienced dramatic growth in their economic power. As they accumulated capital, many invested in the construction of textile mills that converted into yarn and cloth the cotton that was grown by their clients. In North Carolina, an average of six new mills were built every year between 1880 and 1900. By 1900, the state was home to 177 mills, the vast majority of which were located in the Piedmont. Mill owners often emphasized that their factories would provide work for the growing number of rural poor whites, failing to acknowledge that the same forces that were causing rural people's economic hardships facilitated the accumulation of wealth and the construction of mills by entrepreneurs.

Farm families were drawn to factory work by the promise of a steady wage and their sometimes desperate desire to escape a future of poverty and debt. Labor recruiters often visited rural areas and convinced families to move to the mills for a chance at a better life. In other instances, friends or family members already working in the mills encouraged folks back home to take up factory labor. Some families tried to combine factory and farm work, laboring in the mills after the harvest and then returning to the land when it was time to sow again. For most families, however, the move to the mills marked an enduring break with rural life. Over time, they came to think of themselves as a distinct new class of "cotton mill people."

Leloudis, James, and Kathryn Walbert. "Life on the Land." Like a Family, The Making of a Southern Cotton Mill World. Accessed July 10, 2019. https://www.ibiblio.org/sohp/laf/land.html.

subsistence agriculture dominated the Southern Piedmont. Although a handful of large plantations dotted the region, most farmers worked small pieces of land, raising grains, vegetables, and animals to feed their family, and bartered with neighbors for most of the goods they could not produce themselves. On the eve of the Civil War, however, railroads began to enter this backcountry, making the land accessible for commercial agriculture and industry." data-share-imageurl=""> 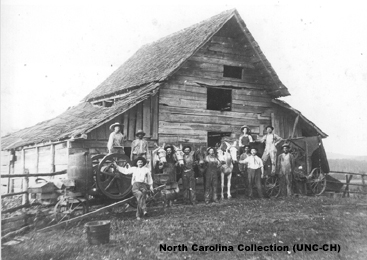 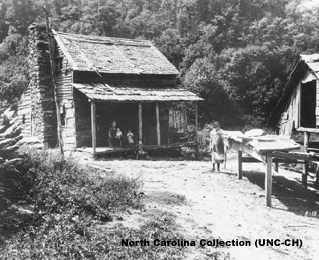 Photograph of a North Carolina mountain farm in the early twentieth century. This family grew tobacco for cash and dried fruit for consumption and to trade with neighbors.