Primary Source: "Address to the Colored People of North Carolina"

In 1870, former Democrats, running as the Conservative Party, were elected to majorities in the North Carolina General Assembly, ending the brief Republican rule in the state. In December, the state House of Representatives impeached Governor William Woods Holden for his role in the “Kirk-Holden War.” They charged that he had illegally declared martial law in Alamance and Caswell counties, ignored writs of habeas corpusOrders from a judge demanding that a prisoner either be charged with a crime or released, arrested and held members of the Ku Klux Klan without benefit of trial, unlawfully recruited militia troops, and illegally paid those troops from the state treasury.

In March 1871, the state Senate found Governor Holden guilty on six counts and voted to remove him from office. He was barred from ever holding office again in the State of North Carolina.

This broadside was circulated by supporters of Governor Holden before his 1871 impeachment. We don’t know how many copies of this “address” were published or where they were distributed. It was signed by seventeen state representatives, at least most of whom were black or multiracial.

...The poor people, especially the colored people are the great body of victims appointed for the slaughter, and we as Representatives, ocupying [sic] the place of power, as did EstherThis refers to the Book of Esther from the Bible. Esther was a Jew chosen by the King of Persia to be his wife. Haman, the king’s highest official, ordered all of the king’s servants to bow down before him, but Mordecai, who was Esther’s cousin, refused. Haman, furious, convinced the king to order the execution of all Jews in the kingdom. Esther learned of the plot and begged the King — who had not known that his wife was a Jew — to spare her people and stop Haman. The king did as Ester asked and had Haman executed. He was unable to change his own order, but he decreed that Jews could defend themselves against their enemies. This deliverance is celebrated today in the Jewish holiday of Purim. The writers of this pamphlet believe that, like Esther, they are the representatives of their people nearest to power and therefore have a special responsibility to stop the harm that is about to be done., feel it to be our duty to warn you of the impending danger, and arouse you to such action as may tend to avert, if possible, the threatened evil.

We therefore propose a day of fasting and prayer throughout the State. Let us ask God to bring our good friend the governor triumphantly through this ordeal, and to avert the evils that are hanging over us.... 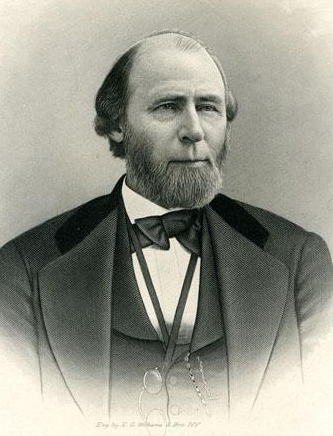 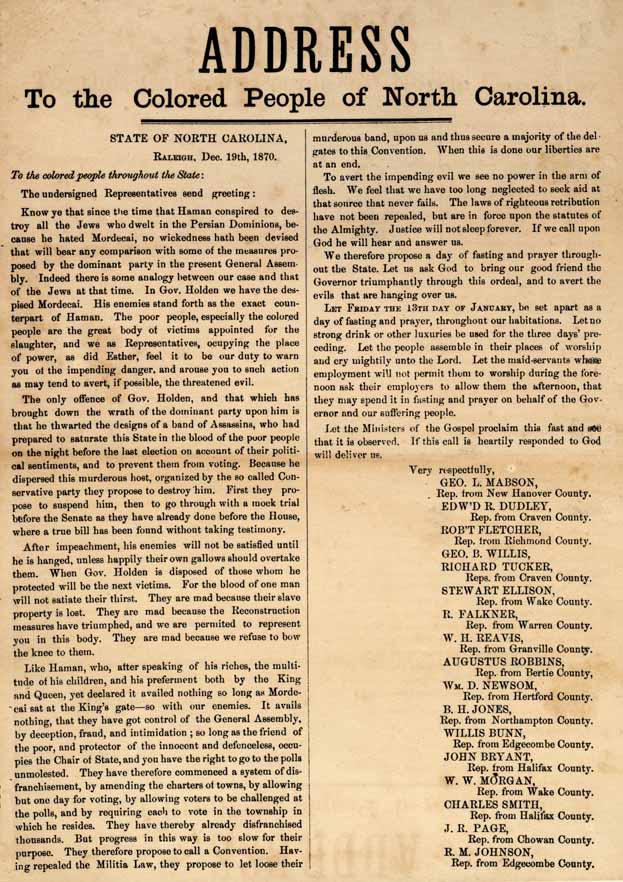 This broadside, or poster, published in December 1870, warned African Americans of the danger they faced if Governor Holden were removed from office.