The following is excerpted from Sherman E. Burroughs's speech about Camp Greene and its conditions during World War I. Camp Greene was located in Charlotte and played an important role in training soldiers for overseas engagements.

It is easier for me and much pleasanter to praise than to blame. I realize how easy it is to criticize those in positions of heavy responsibility. It is always easier to find fault than to take hold and do the job yourself. But I feel very strongly that it is due to the Members of the House that I should now state as accurately and precisely as I am able what my colleague and I actually saw at the camp at Charlotte on the occasion of our visit there on Saturday, February 16, 1918.

Camp Greene is located about 3 miles from the city of Charlotte, N. C., on somewhat rolling ground of slight elevation and having a surface soil of clay formation. This soil is almost completely impervious to water, and the effect of melting snow and recent rains there has been to make it a veritable bog. Mud is knee-deep in all the roads throughout the camp. As my colleague has stated, we had to wear rubber boots in order to get around at all. Water is standing in large pools and ponds all over the surface of the camp. No carriage or automobile could possibly get into the camp, much less make its way through it. I was informed by an officer that a few days before he had seen three mules so badly stuck in the mud that they had broken their legs trying to get out and had to be shot.

The gentleman from North Carolina has just spoken of the many things done by the city and people of Charlotte for this camp. I want to say in reply that what I am stating is not intended in the slightest degree to be any criticism of the city of Charlotte or of the good people who live there. I have no doubt all the gentleman stated concerning Charlotte and its inhabitants is perfectly true. What I say by way of criticism of conditions at Camp Greene goes to those who were directly and immediately responsible for locating and maintaining the camp there. I say that the great War Department of this Government is greviously at fault for its failure to provide adequate and proper sewerage facilities in a camp where upward of 40,000 young men, the pick and pride of this country, are quartered to-day. That is what I find fault with. That is what I criticize.

There is not now and there has never been since the camp was established last summer any sewerage system whatever at Camp Greene. Dirty water from the kitchens and refuse of all kinds are thrown into ditches, and a good part of it remains there, because it can not get away and the clay soil will not absorb it. We were told that the garbage and refuse had been burned as long as they had sufficient wood for this purpose, but that for some time the supply of fuel had been short and that for this reason, as well as on account of the knee-deep mud in the roads, which had prevented garbage removal by the contractors, there had seemed to be no other method of disposition of the refuse, garbage, and kitchen water than the method adopted. We saw a number of old discarded latrines. They are still open and exposed and are filled with 6 or 8 feet of decaying, putrid, festering animal matter. When the warm weather comes, as it is likely to come any time in this southern climate, it takes no sanitary engineer or expert to predict what is going to happen. Flies are going to breed there in enormous quantities, and typhoid fever and diphtheria are likely to break out at any time.

Now, the gentleman from North Carolina tells us that the War Department is talking about putting in a sewerage system. That is all right, but it ought to have been done months ago. It ought to have been done, as it was done, at the northern cantonments, before the men were taken there at all. This work can not be done in a day, or a week, or a month. It is going to take a considerable length of time to install any kind of sewerage system at this camp. Meantime the warm weather will be on us, and everyone of those 40,000 men quartered in that camp will be in imminent peril of his life. I say it is up to the War Department to do something, and to do it now. If they can not install a proper sewerage system before the warm weather comes -- and I am frank to say I do not see how this possibly can be done -- I see nothing else to do than to remove these boys to some other camp. Certainly they must not be left there under conditions such as I have described....

The gentleman from North Carolina spoke about this camp being intended to be a temporary camp. That may be so, but what of it? I do not care whether it was intended to be temporary or permanent, I know that what I am telling you is an accurate statement of what I saw there last Saturday, and I was reliably informed by officers and men that the conditions for weeks before had been much worse than they were the day my colleague and I were there. Temporary or not, the camp has been there since last summer and bids fair to continue for some considerable time to come, and the fact is that, according to the statements of the gentleman from North Carolina, the War Department is just now beginning to talk about putting in some sort of a sewer system. Suppose it was intended to be temporary, what provision, if any, did they make for disposing of their garbage and sewage? I answer, none whatever at all adequate to the conditions which they knew existed there. They knew it was not a sandy soil that would easily absorb water. On the contrary, they knew that it was a clay soil on which water would stand for days and weeks. I say that under such circumstances it was inexcusable to provide no sanitary system for disposing of this dirty water and refuse. It was certainly incumbent upon the War Department before they took those boys away from their homes and brought them to this southern camp to provide all reasonably adequate means for protecting them after they arrived there....

In further substantiation of the statements I have made I present the official report of W. C. Gorgas, Surgeon General, United States Army, to the Secretary of War, dated February 12, 1918, four days before our visit to this camp. This report is taken from the Official Bulletin of February 14, 1918, and reads as follows:

Memorandum for the Secretary of War.

The wet weather and character of the soil at Camp Greene, Charlotte, N. C., together with the temporary nature of the camp, have brought about conditions which I wish to call to your attention and which may be summarized as follows from the last two reports of sanitary inspections of the camp:

Knee-deep mud has interfered with garbage removal by contractors, and quantities have been dumped or buried because of shortage of fuel for burning it.

Limited facilities for heating water for bathing over a period of several months has resulted in the men becoming dirty.

Water from the kitchens, baths, and overflowed latrines is removed by ditches, surface drainage, or stands in pools. The character of the soil will make it slow to dry out and, with the advent of warm weather, flies and other insanitary conditions may be anticipated.

The dirt floors of the kitchens will breed flies; the field ranges in use are uneconomical and smoke indoors with any wood fuel.

Shortage of supplies has held back the work on the detention camp for contacts until its overcrowded condition has led to the establishment of quarantine areas in the regiments; but reports upon this indicate that completion of the detention camp is preferable to continuation of the latter plan, especially since sufficient tent space and separate latrines and mess halls have not been available to make the regimental quarantine absolute in the areas set aside.

Work has been held up on the additional quarters for nurses by failure of material to arrive, and the same has affected progress on reconstruction of the operating and laboratory buildings of the base hospital, which were recently destroyed by fire.

Overcrowding to the extent of eight men to a tent, and occasionally more, is reported.

Sick rates at Camp Greene are not notably high, and measles and pneumonia cases appeared on the decline at the last report; but the unsanitary conditions mentioned should be corrected without delay to prevent increased sickness and mortality which may result from their continuance.

It has been recommended that additional tentage be supplied the commanding general, Camp Greene, to enable him to quarter all men on the basis of five to a tent instead of eight. It is understood that this recommendation has been approved.

The immediate necessity, Camp Greene, is the installation of a sewer system for the entire camp, which is again urgently recommended. 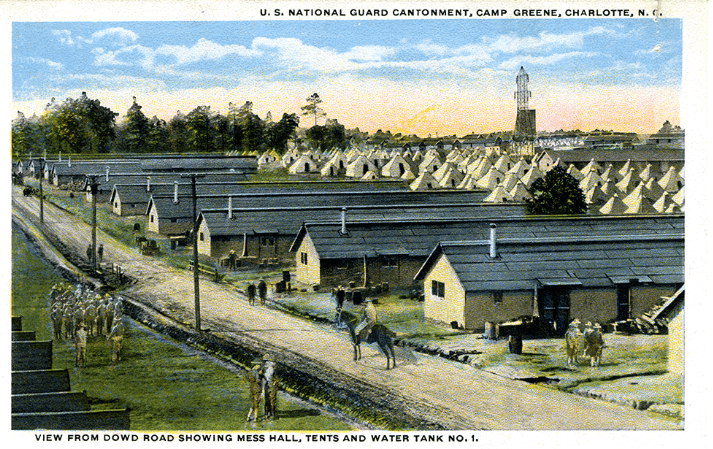 from Our State Magazine

World War I and Camp Greene