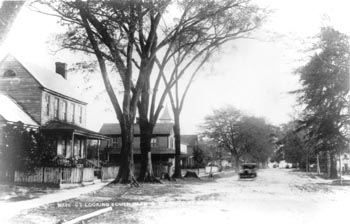 Bath became the first incorporated town in North Carolina in 1705. The town also boasted the state's first library (1701), church (1734), and free school (ca. 1753). Bath is thought to be on or near the site of the sixteenth-century Indian town of Secotan, an area that late in the seventeenth century was inhabited by the Pamlico Indians. Colonial settlers came to the site by the 1690s. Located at the tip of a peninsula formed by Bath (Old Town) and Back (Adam's) Creeks, Bath possessed a good harbor and easy access to the Pamlico River and Ocracoke Inlet. The first settlers were French Huguenots, who were followed by settlers of English extraction from the Albemarle Sound region, Virginia, New England, and England itself.

Early agricultural products from the Bath area included cattle, swine, and corn. Tar, turpentine, shingles, and staves were produced locally and exported to New England and the West Indies. A small sloop was built for commercial purposes at Bath as early as 1707. Bath had 12 houses when it was incorporated and grew slowly but steadily during the early part of the eighteenth century. Wharves and warehouses dotted the waterfront. By 1706 Bath was the seat of Bath County, established in 1696. Court was initially held in the home of the sheriff, Thomas Bonner. A courthouse was built in 1723 and then replaced by a newer one by 1769. Bath County was split in 1738, and Bath became the county seat of the new Beaufort County. The flow of court business, and the arrival and departure of ships, provided customers for several inns and taverns. Three early governors, Robert Daniel, Thomas Cary, and Charles Eden, lived in Bath. 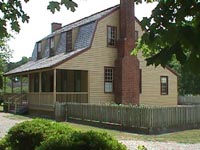 The town was the center of the Anglican parish of St. Thomas, formed in 1701. In that year, the parish received a gift of 1,000 books from the Society for the Propagation of the Gospel in Foreign Parts, thus having a library even before it had a church building or regular minister. Construction of St. Thomas Episcopal Church in Bath, the first church building in North Carolina, did not begin until 1734.

Bath's early days were tumultuous, with the upheaval of the Cary Rebellion, followed by the Tuscarora uprising of 1711. Refugees from destroyed farms and settlements throughout the region filled the town, which shortly thereafter acquired its most famous and notorious citizen, the pirate Blackbeard (whose real name was Edward Drummond, Edward Teach, or Edward Thatch). Arriving in Bath sometime after Charles Eden was appointed governor of the colony in 1714, the "reformed" pirate befriended the governor, reportedly married a local woman, and settled at Plum Point, across Adam's Creek from the town. He soon returned to piracy, sailing the Caribbean and the Atlantic, using Bath as a base and a place to dispose of his spoils. It was widely believed that Governor Eden shared in Blackbeard's spoils in exchange for protection. Blackbeard was killed by Capt. Robert Maynard of the Royal Navy in a battle at Ocracoke Inlet in 1718. Tobias Knight, secretary of the colony, was implicated as a receiver of stolen goods but acquitted, probably through Eden's influence. For some years, an amphitheater on the waterfront in Bath was home to a modern outdoor drama, Blackbeard. 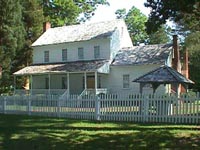 Bath had passed its peak of importance by the late colonial period, as other ports less hampered by sandbars and shallow water took over the state's ocean trade, and traffic on the rivers pushed farther inland, closer to populous new settlements. In 1743, 1744, and 1752, the General Assembly met at Bath, which was considered when a location for the permanent capital of the colony was chosen, but it lost out to New Bern. In 1785, Bath lost its courthouse when the seat of Beaufort County was moved to Washington.

In 1925 the Adams Floating Palace, one of the last operating showboats in the country, was docked in Bath. Author Edna Ferber visited Bath for several days to do research for her novel, Showboat, which inspired the famous stage and film musicals of the same name.

The modern Historic Bath State Historic Site occupies 13 acres in 5 tracts of the town. Following the observance of Bath's 250th anniversary in 1955, the Historic Bath Commission was created in 1959 to acquire, develop, and restore historic property. In addition to St. Thomas Church, a number of other buildings, notably the 1751 Palmer-Marsh House, the ca. 1808 Van Der Veer House, and the 1830 Bonner House, have been restored and opened to the public. There is also a visitor center with artifacts on display.