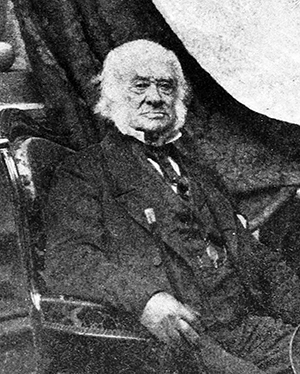 John Fanning Burgwyn, planter and merchant, was born at Thornbury, Gloucestershire, England. He was the oldest child of Cape Fear merchant and planter John Burgwin, who had emigrated from Wales to the American colonies, locating near Wilmington in 1753. His mother, Eliza Bush, was the youngest daughter of Bristol merchant George Bush. His godfather was Edmund Fanning, governor of Nova Scotia. Following a prolonged absence abroad, John Burgwin brought his family to America in 1784 and settled them at his plantation home, the Hermitage, eight miles from Wilmington. After the death of Eliza Burgwin in October 1787, John Fanning was sent with his sister Eliza to be reared by relatives in England. Burgwin lived with a Quaker kinsman in Plymouth and attended private schools in that town. Later, he was further educated at Loughborough House, an academy near London. He returned to North Carolina with his sister in 1801 and took up his father's import-export business.

Upon the death of his father in 1803, Burgwyn inherited two plantations, the Hermitage and Castle Haynes, and settled at the former with his family. He furthered his father's mercantile interests and acquired several ships. Carrying on extensive trade with European ports, he traveled widely and maintained residences at a number of locations. He was in New York City in 1812 but returned to Wilmington five years later. For varying lengths of time, he resided in New Bern, Boston, and Philadelphia; the English cities of Bath, Bristol, Plymouth, and London; and Florence, Italy. Accumulating great wealth, he was alarmed when he found that drafts were being forged on his accounts in foreign banks. Consequently, he altered the spelling of his name from "Burgwin" to "Burgwyn," establishing a change that has been maintained by his descendants.

After his marriage to Sarah Pierrepoint Hunt of New Bern in 1806, Burgwyn gained access to substantial tracts of land in Jones and Craven counties, including the plantations Ravenswood and Alveston Hall. Deciding to move to New Bern in 1811, he exchanged his land and slaves at Castle Haynes and the Hermitage for those of his sister-in-law, Mrs. George W. B. Burgwin, in the Craven County area.

The death of Sarah Hunt Burgwyn's half-brother George Pollock, after a fall from his horse in 1840, brought additional property into the family's hands. Pollock's estate included plantations in Bertie, Chowan, Northampton, and Halifax counties. After extensive litigation with the rival Devereux family, Mrs. Burgwyn's heirs secured title to the Northampton properties, which were divided into numerous plantations, including Alveston, Hillside, Thornbury, Bull Hill, Cypress, Ochoneechee, and the Levels. Burgwyn managed these estates for his children and lived in Northampton County for a time, after disposing of his Jones and Craven properties, including his home at New Bern.

An Episcopalian, Burgwyn was a leader at Christ Church, New Bern, when it was reconstructed in 1824. In addition, he appears to have been interested in higher education: he contributed a hundred dollars toward the completion of South Building at The University of North Carolina during 1809–11.

Continuing his travels to the end, Burgwyn died in Raleigh at the home of his son Henry K. and was buried in Oakwood Cemetery. A portrait is in the possession of Dr. Collinson P. E. Burgwyn of Newport News, Va.

Goodwin, Nathaniel. Genealogical Notes: or, Contributions to the Family History of Some of the First Settlers of Connecticut and Massachusetts. Hartford, Conn.: F.A. Brown. 1856. 65-66. http://books.google.com/books?id=aVcBAAAAQAAJ&pg=PA65#v=onepage&q&f=false (accessed July 31, 2013).