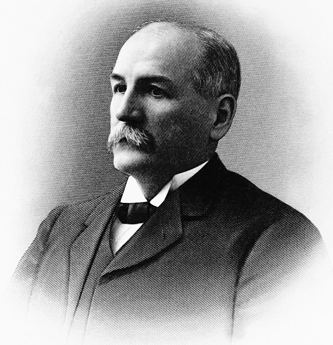 David Young Cooper, tobacconist, industrialist, and financier, the son of Alexander Cooper and Harriet J. Young, was born in Granville County. His grandfather, James Cooper of Glasgow, Scotland, moved to Granville County from Virginia at the close of the eighteenth century and settled at Grassy Creek. Alexander Cooper resided throughout his life at Grassy Creek, where he became an elder in the Little Grassy Creek Presbyterian Church, a successful farmer and slaveowner, and a justice of the peace.

David Young Cooper received his early education at country schools near his home. From 1858 to 1863 he attended Horner Military School at Oxford, afterward serving a year in the Confederate Army. For five years after 1867 he operated the family farm.

In 1872, Cooper moved to Henderson, where he began the commercial and industrial career in which he became prominent. His first enterprise was the establishment of a tobacco auction warehouse in partnership with his uncle, James Crawford Cooper. The Cooper Warehouse made Henderson a leading tobacco market, and from 1875 to 1895, Cooper was one of the largest sellers of fine tobacco in the South. He purchased his uncle's interest in 1886 and personally directed the enterprise until 1902, when he relinquished operation to his sons Sydney Perry and Alexander. Cooper was also instrumental in organizing the Henderson Storage Warehouse. With this facility, it was no longer necessary to ship tobacco to Richmond and Petersburg for storage and certification, and therefore Henderson's position as a tobacco market was improved.

In 1895, Cooper organized the Henderson Cotton Mill. The mill opened with a capital of $90,000 and rapidly proved successful. In 1898 a second mill, the Harriet Cotton Mill, named in honor of Cooper's mother, was organized with a capital of $240,000. Until his death he presided over both mills, which soon became the largest employers in the region and the largest producers of hosiery yarn in the South. They continue to be a major force in the economy of Vance County.

Among his other financial endeavors, Cooper was a director of the Durham and Northern Railway, the Seaboard Airline Railway, the Commercial and Farmer's Bank of Raleigh, and, from its formation in 1889, the Citizens Bank and Trust Company.

Cooper was active in civic and church affairs. He helped found the Henderson graded schools by organizing prominent citizens of Henderson to establish Central School in 1899. Operation of the school was undertaken by the General Assembly in 1901. Cooper was also prominent in the movement to establish Vance County from portions of Granville, Franklin, and Warren counties, a movement that succeeded in 1881. A member of the Episcopal church, he was active in acquiring St. Mary's School in Raleigh for the church and served as a trustee of the school from the date of its acquisition.

Cooper married Leah Hilliard Perry, daughter of Dr. Sydney Perry of the prominent Franklin County family, on 24 Feb. 1876. Four sons and a daughter were born of the marriage. Leah Cooper died in 1897, and in 1898, Cooper married Mrs. Florence Davis, daughter of Nicholas Chavasse of Henderson and granddaughter of Sir Thomas Chavasse, an eminent English surgeon.

Cooper was buried in Elmwood Cemetery in Henderson.

"In Memorian: David Young Cooper." Journal of the one hundred and fifth annual convention of the Protestant Episcopal Church in the state of North Carolina. Raleigh [N.C.]:Edwards and Broughton. 1921. https://archive.org/stream/journalofannualc105epis#page/20/mode/2up