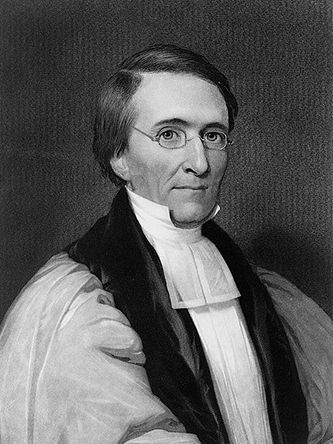 Thomas Frederick Davis, lawyer, Episcopal priest, and later bishop of South Carolina, was born in New Hanover County near Wilmington, the son of Thomas F. and Sarah Isabella Eagles Davis. His father was clerk of court for New Hanover County; his young brother, George, served as senator in the Confederate Congress and was appointed attorney general of the Confederate States. At the age of ten, Davis was sent to a boarding school in Chapel Hill in preparation for college. He was graduated from The University of North Carolina in 1822 and returned to Wilmington to study law.

After admittance to the bar, Davis practiced successfully for six years. In 1828, shortly after the death of his first wife, he was confirmed in the Episcopal church and proceeded to leave the legal profession for the ministry. He was ordained a deacon by Bishop Levi S. Ives on 27 Nov. 1831 and a priest on 16 Dec. 1832. He first journeyed as a missionary to the towns of Wadesboro and Pittsboro, where he held services in each on alternate Sundays. Although these congregations were a hundred miles apart, Davis succeeded in establishing Calvary Church in Wadesboro and building and consecrating St. Bartholemew's Church in Pittsboro, both in 1833. Afterward, he was called back to Wilmington to become rector of St. James Church; there he continued his missionary work in the city. At the end of three years, Davis became ill and required a year of rest. Upon regaining his health, he moved to Salisbury where he served as rector of St. Luke's Church for ten years. In addition to his growing parish, Davis worked with missionary stations and distant congregations in Lexington and Mocksville and was long active in church affairs in the state. In 1846 he accepted a call to Grace Church in Camden, S.C., thus entering the diocese of that state. He was elected bishop of South Carolina in May 1853 at the church convention held in Charleston. It was rumored that he was also being considered to fill the vacancy of bishop of North Carolina, but that convention met later in the year.

On 17 Oct. 1853 both Davis and the bishop-elect of North Carolina, Thomas Atkinson, were consecrated at St. John's Chapel in New York City with more than thirty bishops officiating. Davis took his seat as the presiding officer of the diocesan convention in February 1854. He continued his active ministry, although a nervous disorder had brought on total blindness by 1862. He worked to establish a theological seminary, was involved with the religious divisions during the Civil War, and gave early support to the founding of the University of the South, located in Sewanee, Tenn.

Davis was married twice: in 1828 to Elizabeth Fleming, by whom he had a son, Thomas Frederick Davis, Jr.; and to Ann Ivie Moore, also of Wilmington. Children of the second marriage were Ann E., Sallie, James M., John, Bruce, and Junius.

Davis remained bishop of South Carolina until his death. He was buried at Grace Church in Camden, S.C.

Thomas Frederick Davis, A Genealogical Record of the Davis, Swann, and Cabell Families of North Carolina and Virginia (1934).

Furches, Alda Thompson. "The Rich and 'Not So Brief': History of Christ Episcopal Church condensed and edited from the historical documents of the parish." The Episcopal Diocese of North Carolina. September 1982. http://christchurchcleveland.dionc.org/about-us.html (accessed February 11, 2014).