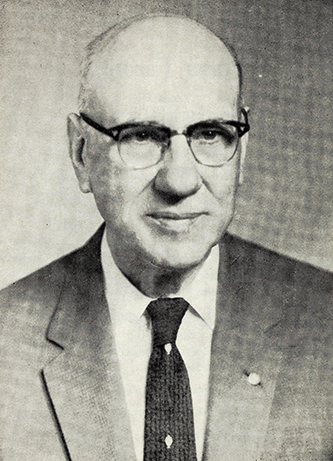 Emery Byrd Denny, lawyer and North Carolina Supreme Court justice, was born on a farm near Pilot Mountain in Surry County, the son of the Reverend Gabriel and Sarah Delphina Stone Denny. After attending the public schools of Surry County, he studied at Gilliam's Academy from 1910 to 1914 and at The University of North Carolina School of Law from September 1916 to December 1917, when he joined the aviation section of the Signal Corps, U.S. Army. During World War I he held the ranks of private, corporal, sergeant, and master electrician. He returned to the university's law school from June to August 1919. The honorary degree of LL.D. was conferred upon him by The University of North Carolina in 1946 and by Wake Forest College in 1947.

Admitted to the bar in 1919, Denny practiced law as a member of the firm of Denny and Gaston from 1919 to 1921, was associated with Mangum and Denny from 1921 to 1930, and practiced alone from 1930 to 1942. He served as attorney for Gaston County from 1927 to 1942 and for the North Carolina Railroad from 1937 to 1938, and was mayor of Gastonia from 1929 to 1937. He also served as president and director of the Ranlo Manufacturing Company from 1936 to 1941 and as a trustee of The University of North Carolina from 1941 to 1943. During the General Assembly of 1941 he was special counsel to Governor J. Melville Broughton. On 3 Feb. 1942 he was appointed associate justice of the North Carolina Supreme Court by Governor Broughton to succeed the late Associate Justice Heriot Clarkson. After completing the unexpired term, he was elected to a full eight-year term on 3 Nov. 1942; he was reelected on 7 Nov. 1950 and again on 4 Nov. 1958. On 9 Mar. 1962, he was appointed chief justice of the North Carolina Supreme Court by Governor Terry Sanford to succeed Chief Justice J. Wallace Winborne, who retired. In November 1962 he was elected to serve out the unexpired term of Chief Justice Winborne. He retired on 5 Feb. 1966 and qualified as an emergency justice of the supreme court, a position he held until his death.

Denny served as chairman of the North Carolina Judicial Council from 1956 until his appointment as chief justice. He also was a trustee of the North Carolina Baptist Hospital, Winston-Salem; of the Baptist State Convention of North Carolina; and (except for one year, from 1950 until his death) of the Southeastern Baptist Theological Seminary, Wake Forest, where he also served as a member of the executive committee and chairman of the board of trustees. In 1968 he was appointed chairman of the State Constitution Study Commission by Governor Dan K. Moore. In addition, he belonged to Phi Delta Phi legal fraternity; Holland Memorial Lodge 668, Ancient Free and Accepted Masons; Gastonia Chapter No. 66, Royal Arch Masons; Gastonia Commandery No. 28, Knights Templar; and St. Titus Conclave No. 72, Red Cross of Constantine. He was grand historian, grand steward, and grand deacon of the Grand Lodge of North Carolina A.F. and A.M.; judge advocate of the Grand Lodge (1965–71); and member of the Board of General Purposes (1967–73). He was chief adept of the North Carolina College Societas Rosicruciana In Civitatibus Foederatis. He held membership in the Watauga Club, Raleigh Executives Club, and the Newcomen Society in North America. A Democrat, he served as chairman of the Gaston County Board of Elections (1924–26), chairman of the Gaston County Democratic Executive Committee (1926–28), and chairman of the State Democratic Executive Committee (1940–42).

A teacher of a men's Bible class for twenty-eight years, Justice Denny was a member of Hayes Barton Baptist Church, Raleigh, where he had served on the board of deacons and as its chairman. He died in Raleigh and was buried in Oakwood Cemetery.

Family papers (in possession of the author).