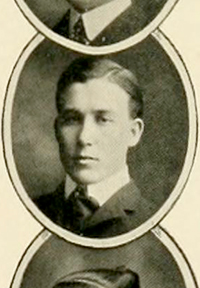 Reuben Oscar Everett, attorney and civic and cultural leader, was born at Hamilton, Martin County, the son of Justus and Elizabeth Purvis Everett. Shortly afterwards he moved with his family to their plantation home, Swamplawn, near Palmyra, where his father was a large planter. After completing his early education at Vine Hill Academy in Scotland Neck, Everett attended The University of North Carolina where he held various class offices and was graduated in 1903. He studied law in the first class at Trinity College while he taught at Durham High School. Later he continued the study of law and other subjects at the summer schools of Columbia University and Harvard University.

Immediately after obtaining his law license in 1905, Everett began practicing in Durham. He was the first Durham city attorney and the first prosecuting attorney in Durham Recorder's Court (1921–33). He also was the first attorney (1906) for and later secretary of the Durham Merchants Association, which he helped form. In 1926, he became an early member of the American Law Institute and later was a life member. He was admitted to practice law before the United States Supreme Court, U.S. Court of Military Appeals, federal district courts, and North Carolina state courts. By then he was president of the Durham Bar Association; a senior member of the North Carolina Bar Association and American Bar Association, with which he was affiliated from 1913 until his death; and a member of the judicial district bar. His law partners included former Governor W. W. Kitchin and former Attorney General James S. Manning.

On 24 June 1926 Everett married Kathrine Robinson, of Fayetteville, who was then one of the few women attorneys in North Carolina. Their only child, Robinson Oscar Everett, was born on 18 Mar. 1928; he subsequently was associated with his parents in the practice of law under the name of Everett, Everett & Everett. The senior Everett was devoted to his profession and never retired from it, actually dying in his office at the age of ninety-two.

Everett and three of his brothers, Justus, Benjamin B., and Alphonso, served in the North Carolina General Assembly. R. O. Everett served five terms in the state house of representatives between 1921 and 1933. His public service also included membership on the board of trustees of The University of North Carolina for twenty years. He served as chairman of the Durham County Board of Elections for a decade (when he initiated the use of voting machines there), of the Durham-Orange Historical Commission for many years, and of the Bennett Place Memorial Commission from 1923 until his death. Everett was a commissioner for North Carolina, a representative of the American Cotton Association to the World Cotton Conference in Europe (1921), and president of the North Carolina State Fair. He also was one of the state's delegates to the Democratic National conventions at San Francisco, Calif. (1920), and Houston, Tex. (1928). At the latter he made a nominating speech for Cordell Hull, who later became secretary of state in Franklin D. Roosevelt's administration.

Long active in the civic and religious affairs of the community, Everett, an Episcopalian, was a member of St. Phillips Episcopal Church in Durham, the Knights of Phythias, the North Carolina Literary and Historical Association, the North Carolina Society of County and Local Historians, and the English Speaking Union. As chairman of the Bennett Place Memorial Commission, he headed the restoration of the Bennett Place in 1965. In addition, as chairman of the George Washington Statue Commission, he was instrumental in placing the present statue in the capitol rotunda in Raleigh, an event that received national publicity. Earlier he traveled to Italy to examine the model for the statue of George Washington made by Antonio Canova in 1820. The original was destroyed by a fire in the North Carolina capitol in 1831.

Everett was chief marshal for the North Carolina State Fair, and a street in West Raleigh and a street in Durham were named in his honor. A suggestion by him is credited with leading to the establishment of the Sir Walter Cabinet in North Carolina, a society for wives of legislators and chief state administrators. He was active in marking and preserving points of historical interest in North Carolina. Widely known by persons in all walks of life, he participated in many projects for the good of his community, state, and nation. He assisted in forming the Legal Aid Society in North Carolina, and for his work in bettering race relations he received a special award from the Durham Committee on Negro Affairs.

He was buried in Cross Creek Cemetery, Fayetteville.