John Fergus, surgeon in the French and Indian War and the American Revolution, became a leader in Wilmington and New Hanover County as justice of the peace and commissioner for examining veterans' claims. He was the son of James Fergus, described as a "chirurgion," who before 1737 lived in the town of Brunswick and in 1745 was a large landowner and seller of real estate. James owned land on the Cape Fear River, part of which passed to his son, John, and came to be known as Belle Meade. This is now the property of the Wilmington Historical Association.

According to Griffith John McRee, a descendant, John Fergus studied medicine in Edinburgh, Scotland. McRee once showed David L. Swain a commission from Governor Arthur Dobbs to John Fergus as surgeon of a company of foot commanded by John Paine, Esq., dated 20 Jan. 1758, just a few months after Fergus's sixteenth birthday. Fergus was later a surgeon of the First Battalion of Fort Dobbs, for in November 1760 he was allowed a claim of £15 for medicines for the garrison of the fort. In the House journal of October 1784 a petition asked that Dr. John Fergus, a surgeon in the Indian War of 1761 under the command of the late Colonel Hugh Waddell, be permitted to enter land in the district of Wilmington left vacant and in the quantity allowed by an earlier proclamation of the king. The petition was approved on 16 Nov. 1784.

Fergus was appointed surgeon for the First Battalion of North Carolina troops in May 1776 but resigned in April 1777. While he was medical officer at Wilmington in July 1777, he tried to help young John James Ward get an appointment as surgeon and mate to work with him. Dr. Ward wrote to Governor Caswell asking for the job, but apparently the governor turned him down because he soon left the temporary service of assistant to Fergus.

Fergus was first made a justice of the peace in December 1788 and continued to serve in the New Hanover County Court until the end of his life. Critical of "unruly" justices in New Hanover County who had forced others to give them the oath so they could sit on the bench, he took his grievance to the state senate at its 1786 meeting in Fayetteville. Another instance of his sense of fair play was evident earlier in his career when he signed a memorial, along with thirty-two merchants and traders of Wilmington, questioning the propriety of the Confiscation Act. Although it pointed out that the justice of the legislature would be called into question, the memorial was rejected in May 1780. Sometime during this period Fergus served as trustee for building a jail and a school in Wilmington.

The 1790 census for New Hanover County lists John Furgus [sic] as head of a family consisting of five free white males over the age of sixteen, two free white females, and thirty-three slaves. 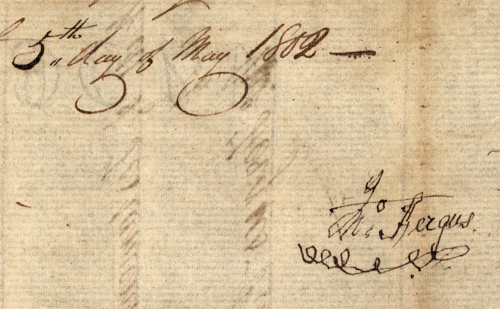 Fergus died at the Sound below Wilmington at the age of sixty-one. His obituary in the Raleigh North Carolina Minerva appeared on Monday, 17 May 1802. His will, signed in 1799, listed as heirs his daughter, Ann McRee, and son-in-law, Captain Griffith John McRee; John Fergus, Jr.; Margaret Bruff, wife of James Bruff, of Maryland and a Revolutionary War prisoner in 1781; and Jane Wheaton. John Fergus, Jr., who also served in the American Revolution, was justice of the peace in Wilmington in 1795, studied law, and became state attorney for New Hanover County. In 1806 he was the commandant of the port of Wilmington. John Fergus II was one of the original subscribers to the first American medical journal, the New York Medical Repository (1799).

The James Fergus listed in Fergus's will was probably the eldest son of John Fergus II. James served eighty-four months in the Continental Army and was later a justice of the peace in Wilmington. When George Washington visited Wilmington on his southern tour in 1791, a select group of citizens presented an address to the president in April. One of the several signers was "J. Fergus," who, according to one historian, was James Fergus, "son of Dr. John Fergus." This statement should read, "James Fergus II, eldest son of John Fergus II." The address may be the basis for the apocryphal story that Dr. John Fergus was visited by George Washington when he was in Wilmington.

Fergus was the grandfather of James Fergus McRee of Wilmington, the distinguished physician and botanist, and the ancestor of Griffith John McRee, the historian.