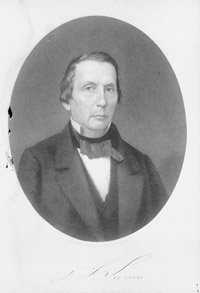 David Lowry Swain (1801-1868) had a long tenure as president of the University of North Carolina (1835-1868) after his service as the state’s chief executive. He was born in Buncombe County on January 4, 1801, the youngest child of George Swain and Caroline Lane Lowry. After attending Newton Academy, he briefly enrolled at the University of North Carolina and then began the study of law under Chief Justice John Louis Taylor. He returned to Buncombe County in 1823 to begin his practice. Swain’s wife was the former Eleanor White, granddaughter of Revolutionary governor Richard Caswell; they had five children.

Established as an attorney in Asheville, Swain was elected in 1824 to the state House for the first of five terms. In that body he became recognized as an advocate for western interests, internal improvements, and progressive government. Noncommittal with respect to party, he was associated with a coalition of National Republicans and others opposed to Andrew Jackson and to the dominance of eastern Democrats. On December 1, 1832, the General Assembly elected Swain to his first term as governor, even though he had not been regarded as a leading contender for the office. His support came from the disparate coalition opposed to Jackson and to the leading Democratic candidate for governor, Richard Dobbs Spaight Jr. The next two years he was reelected governor, openly associating himself with the new Whig Party and with forces of reform.

From the outset Swain played a more active role as governor than his predecessors, even though the constitutional powers of the office remained constrained. Repeatedly and forcefully, he advocated sweeping reforms in the areas of education, banking, taxation, and internal improvements, carrying his message beyond the halls of the legislature. By 1834, he began to focus on constitutional reforms, convinced that progressive measures hinged upon the defeat of the eastern establishment. Swain ushered through the General Assembly a bill calling for a constitutional convention, which met in Raleigh in July 1835. Swain himself sat as a delegate and served as chairman pro tempore. To him, more than anyone else, belongs the credit for the accomplishments of that meeting, including crucial reforms in the methods of representation and the election of governors by popular vote. With the political impediments to progress finally broken down, railroad construction, public education, and other progressive measures became realities under Whig leadership.

In 1835 Swain was elected president of the University of North Carolina by its board of trustees. Though lacking in academic credentials, he won the respect of both students and faculty for his administrative ability, personality, and integrity. Moreover, as University president, he redoubled his persistent search for documentary materials relating to the state’s history. By 1860, the University had become the largest institution of higher learning in the South, with course offerings, physical plant, and enrollment all having grown under Swain’s leadership.

Though severe hardships were experienced during the Civil War, Swain managed to keep the University open. As Sherman’s army approached Raleigh in the spring of 1865, Swain played a role in surrendering the state capital and in securing assurances that the University would not be harmed. He remained as University president until July of 1868, when he and his entire faculty were removed by the new board of trustees. Swain died on August 29, 1868, as the result of a buggy accident. Initially buried at his Chapel Hill home, he was later reinterred in Raleigh’s Oakwood Cemetery.