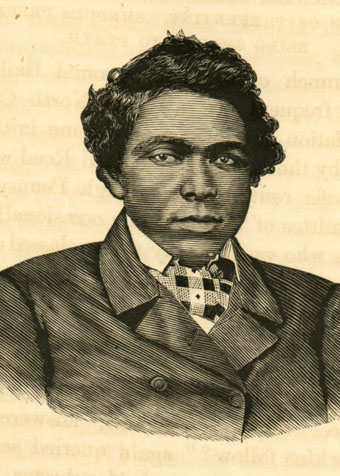 Abraham Galloway was a formerly enslaved person, Union spy and military recruiter, militant abolitionist, advocate for Black suffrage, North Carolina Republican Party organizer, delegate to the Convention of 1868, and State Senator. He was born on February 8, 1837 in Smithville, North Carolina – a small coastal port town known today as Southport in Brunswick County.  His mother, Hester Hankins, was a slave and his father, John Wesley Galloway, was a white boatman.

At age ten or eleven he apprenticed to a brick mason; and soon after he became a master brick mason he moved with his enslaver, Marsden Milton Hankins, to Wilmington – North Carolina’s largest city and busiest seaport at the time.  In 1857 he found the opportunity for freedom: hiding in the cargo hold of a boat, he made his way out of Wilmington via Philadelphia, reaching Canada with the help of the Underground Railroad.  Shortly after settling in Canada West (now known as the province of Ontario), Galloway began working for the abolitionist movement, traveling throughout Canada and the United States.  In 1860, he traveled to Haiti to work for the recruitment effort to organize a John Brown type military invasion in the American South.

In April 1861, Galloway returned from Haiti and began working as a spy for the Union under Major General Benjamin F. Butler in North Carolina, Louisiana, and Mississippi, where he was ultimately captured at Vicksburg.  As a spy working for Butler, he went on many missions such as one to Beaufort, NC where he scouted marine landings in advance of General Ambrose Burnside’s campaign against the North Carolina coast in the winters of 1861-62.

In 1862 while stationed with Wisconsin’s 4th Infantry, Galloway took on a mission that led to his capture in Vicksburg, Mississippi.  Growing up in North Carolina, Galloway had many ties and relationships with other enslaved people in the area which were helpful for him as a spy there, but when Butler was ordered to lead an attack in New Orleans in February of 1862, he knew having spies along would be helpful and brought Galloway who had never been to the Deep South. After reaching New Orleans, Louisiana on May 1st, Galloway traveled immediately to Vicksburg, Mississippi which if the Union could take would split the south in two. The Union could not overcome Vicksburg, and eventually they were forced to abandon the effort and leave behind the enslaved people they had used in the effort as well as Galloway who had been captured.  It is unclear whether he escaped or was released, but he ultimately made his way to New Bern where he appears to have taken on a final intelligence mission for Butler.

Galloway appears at this point to have left his role in military intelligence for the Union, moving toward a focus on recruitment of black soldiers for the Union and political aspects of the abolition movement.  He also served as a guide for Robert Hamilton, a black journalist for the newspaper the Anglo-African, leading him through freedmen settlements.  In recruiting black Americans to enlist for the Union, his approval and influence in New Bern spread across the North with success: within several months 30 black regiments had joined the Union effort.  During the summer of 1863, Galloway spoke for many events, raised funds, recruited black soldiers, and kept his ties to other abolitionists. During this period he married Martha Ann Dixon in Beaufort, and in 1863 he was able to remove his mother, Hester Hankins from enslavement in Wilmington to freedom in Union-held New Bern.

While he was a spy, especially when he was in the Deep South, Galloway experienced many different perspectives of life as an enslaved person in various places and the horrors and atrocities enslaved people endured. These insights may have given him a deeper desire to help enslaved people achieve freedom, abolish slavery, and gain equal rights under the law.  Among North Carolina’s freed people in the Union held New Bern area, he became a powerful grassroots organizer, a coalition builder, and an orator. In coastal North Carolina, Galloway appears to have had the most influence and authority.

On April 29th, 1864, Galloway led a group of black southern delegates to meet with President Abraham Lincoln to argue for black American citizenship with suffrage and political equality.  He was then chosen by freedmen in New Bern to serve as a North Carolina delegate for the National Convention of Colored Men of the United States that took place in Syracuse, New York.  The convention founded the National Equal Rights League.

In the fall of 1865, Abraham and Martha Ann Galloway moved to Wilmington where their first child, John, was born on December 16th, 1865. Galloway began advocating strongly for the Republican Party and on October  17, 1867 he was elected as a delegate to the Constitutional Convention of 1868 in Raleigh. Later, he was nominated as a presidential elector and became North Carolina’s first black elector. He was elected to the state Senate in 1868 from New Hanover and Brunwick Counties as well as for a second term in 1870.

On September 1, 1870, Galloway died unexpectedly at 33 years old, having had his second son Abraham Jr. only six months earlier. About 6,000 people came to his funeral including all of the black people of Wilmington and many white people.

Still, William. The underground rail road : a record of facts, authentic narratives, letters, &c., narrating the hardships, hair-breadth escapes, and death struggles of the slaves in their efforts for freedom, as related by themselves and others or witnessed by the author : together with sketches of some of the largest stockholders and most liberal aiders and advisers of the road. Philadelphia : Porter & Coates. 1872. https://archive.org/details/undergroundrailr1872stil (accessed October 30, 2014).

"Abraham Galloway." Marker D-114, North Carolina Highway Historical Marker Program. North Carolina Office of Archives and History, North Carolina Department of Cultural Resources. The underground rail road : a record of facts, authentic narratives, letters, &c., narrating the hardships, hair-breadth escapes, and death struggles of the slaves in their efforts for freedom, as related by themselves and others or witnessed by the author : together with sketches of some of the largest stockholders and most liberal aiders and advisers of the road. Philadelphia : Porter & Coates. 1872. 150-151.