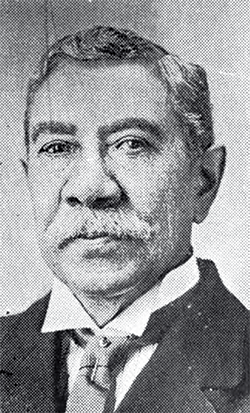 John Patterson Green, African-American attorney, legislator, and author, was born in New Bern, the only son of John Rice Green, a tailor, and Temperance Durden Green, a seamstress after her husband's death in 1850. Though never a slave, young Green grew up in relative poverty after 1850, working at odd jobs in both New Bern and Cleveland, Ohio, where Mrs. Green and her three children moved in the summer of 1857. While employed in a variety of trades, Green attended grammar school and high school, completing his secondary education at age twenty-four. In the year of his graduation, he wrote and published at his own expense Essays on Miscellaneous Subjects, "By a Self-Educated Colored Youth," a thirty-eight page collection of five high school compositions of a didactic and hortatory nature. In 1869, he began to study law, and on 20 Sept. 1870 he passed the South Carolina bar.

Green lived in Bennettsville, S.C., from 1870 to 1872 before deciding to return to Cleveland. A practicing lawyer and active Republican campaign orator in the South, he established a similar record in Cleveland, although there he soon directed his energies toward attaining local political office. In 1873 he won his first election—as justice of the peace in Cleveland, a post he held for nine years. In 1881, the Republican party nominated him to serve in the lower house of the Ohio General Assembly. Green's successful campaign and moderate legislative record led to his reelection in 1889. Encouraged by the possibility of becoming the first black man to sit in the Ohio Senate, Green ran for and won the senatorship of Cleveland and Cuyahoga counties in 1891. His single term in the senate marked the pinnacle and conclusion of his political career.

Both during and after his stint in politics, Green maintained a successful criminal law practice in Cleveland. He was also a ready worker for the Republican party and a frequent delegate to its national conventions. In 1872, he represented the First District of South Carolina as an alternate delegate to the Republican National Convention. He attended the 1882 and 1896 conventions as an alternate delegate at large from Ohio. In recognition of his work as a traveling speaker in the presidential campaign of 1896, William McKinley appointed him U.S. postage stamp agent, a position never before held by an Afro-American. During his tenure in Washington, Green formally joined the Episcopal church, the denomination in which he had been raised as a child. In 1905 he returned to Cleveland and once again resumed his legal career at age sixty-one. Continuing his law practice until his accidental death in 1940, Green remained a respected figure in Cleveland, as evidenced by the designation of 4 Apr. 1937 as "John P. Green Day" by the mayor and city council.

In addition to his public career, Green was involved in several private literary pursuits. Eleven years after publishing his youthful essays, he brought out a volume that he had used in his political efforts on behalf of James A. Garfield's presidential campaign. Dedicated to "those unswerving Republicans" engaged in the reconstruction of the South, Green's Recollections of the Inhabitants, Localities, Superstitions and Ku Klux Klan Outrages of the Carolinas (1880) displays a progressive Republican attitude toward the problems of the South during that turbulent period. The book is less a political tract, however, than a miscellany of local color of the Carolinas as gleaned from the memory of "a 'Carpet-Bagger' who was born and lived there," Green's self-descriptive phrase on the title page. In his autobiography, Fact Stranger than Fiction (1920), he reviewed the first seventy-five years of his life in an anecdotal and episodic narrative, which is partly personal history, partly a travel book, partly a record of judicial and legislative proceedings, and partly a catalogue of Green's friends and famous acquaintances.

Upon graduation from high school, Green married Annie Walker who died in 1911. Some time afterward he married a widow, Mrs. Lottie Mitchell Richardson, with whom he spent his later years.