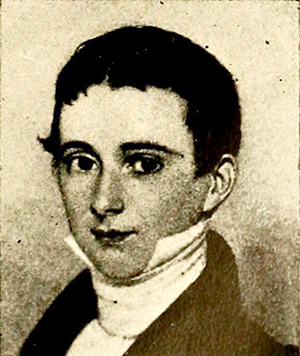 Charles Wilson Harris, educator and lawyer, was born at Mill Grove plantation, about seven miles west of Concord. His paternal grandfather, Charles Harris, emigrated with four brothers and a sister from Ayrshire, Scotland, to Pennsylvania about 1725 and thence to the Poplar Tent district of what was then Anson County sometime between 1745 and 1751. His father, Robert Harris, served under General Joseph Graham in the Revolutionary War and lost his right arm in the skirmish at Clapp's Mill, preliminary to the Battle of Guilford Court House. His uncle, Dr. Charles Harris, is credited by Kemp P. Battle with having "taught at his home probably the first medical school in the State."

Charles Wilson Harris was the second of three children born to Robert and Mary Wilson Harris. His older sister, Jane Wilson Harris, married Nathaniel Alexander. His younger brother, Robert Wilson Harris, was briefly engaged in commerce at Salisbury and later undertook farming near Sneedsborough in Anson County. His mother died in his youth, and his father married Mary Brevard Davidson, the widow of General William Lee Davidson for whom Davidson College was named. Although no record of Harris's preparatory education survives, it is known that a classical school was conducted in association with the Poplar Tent Presbyterian Church of which his father was for many years the presiding elder. Harris attended the College of New Jersey (Princeton) and was awarded the Mathematical Oration at his graduation in 1792.

For the next two years Harris was a teacher in Mecklenburg County, N.C., and later in Prince Edward County, Va. Although impossible to substantiate, this was probably at Hampden-Sydney College. At some point, he attended William and Mary College in Williamsburg to obtain, as he wrote some years later, a smattering of experimental philosophy, a subject that he felt had been shamefully neglected in his studies at Princeton. On returning to North Carolina, Harris studied medicine for a while with his uncle Dr. Charles Harris, a well-known physician. During his later tenure at Chapel Hill, there being no physician at the university, he kept a stock of medicines, both for the students and the townspeople, which he sold at cost. In March 1795, he joined the faculty of The University of North Carolina as professor of mathematics. The only other member of the academic staff at this time was the presiding professor, David Ker. In the summer of 1796 Ker resigned under pressure of the trustees, and Harris thereafter acted as presiding professor until the time of his own resignation the following December.

Although his tenure on the faculty was brief, Harris played a seminal role in the early direction of the university. On 3 June 1795 he organized the students to form a debating club, which in succeeding months became the Dialectic and Philanthropic Literary Societies. Organized exercises were conducted by these societies each Friday evening and Saturday morning to provide practice in public speaking, English composition, and debate. The exercises were drawn from modern history and literature, subjects not included in the standard classical curriculum prevailing at colleges of the day. The sessions implemented Harris's belief that "true learning consists rather in exercising the reasoning faculties and laying up a store of useful knowledge, than in overloading the memory with words of dead languages," a pedagogical theory he shared with General William R. Davie, the moving spirit among the trustees. His second lasting contribution to the university's early development lay in persuading Joseph Caldwell, a graduate of the class of 1791 at Princeton, to join the faculty in October 1796. Caldwell succeeded Harris as presiding professor in 1797 and continued to guide the university's growth until his death in 1835.

Harris undertook to complete his legal studies in April 1797, reading law under General Davie at Halifax. He was admitted to the bar in the latter part of that year and succeeded to Davie's practice when Davie was elected governor. While in Halifax, Harris maintained his interest in The University of North Carolina, which in 1799 granted him the honorary master of arts degree; in 1800, he was elected a trustee. In 1802, he was induced by Davie and others to accept an appointment on the bench. However, he was forced to prevent his nomination from being considered by the legislature because of a worsening tubercular disease which had first afflicted him in October 1798. In the spring and summer of 1803, Harris traveled to the Bahamas attempting to recover his health. He arrived in New York in September, and after a brief stay returned to the family home at Mill Grove.

On 14 Apr. 1798 Harris was admitted to the Order of Freemasons at Chapel Hill. Although both his grandfather and father had served as elders of the Poplar Tent Presbyterian Church, Harris himself appears to have held no religious convictions until the period immediately preceding his death. It seems likely that his religious lassitude as well as his membership in the Free-masons were attributable to the influence of his mentor, General Davie. During the weeks before his death, Harris confessed the Christian faith and instructed that no Masonic rites be included in his funeral service. He died at Sneedsborough while visiting his brother Robert and was buried in a private cemetery in Anson County. Although his tombstone records his date of death as 15 Jan. 1804, both the Raleigh Minerva and the Register in their issues of 15 Feb. 1804 report his death as having occurred on 26 January.