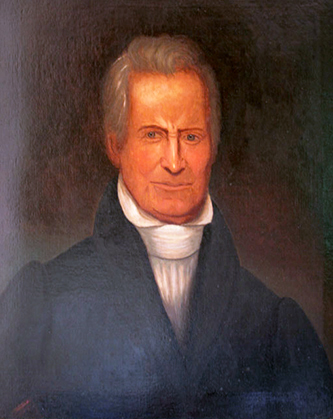 Joseph Graham, Revolutionary soldier, politician, and iron entrepreneur, was born in Chester County, Pa. James Graham, his father, was Scotch-Irish and had settled in Berks County, Pa., in 1733. His mother, Mary McConnell Barber Graham, also of Scotch-Irish descent, was James Graham's second wife. Their union produced five children; Joseph Graham was the youngest son but had two younger sisters. Widowed in 1763, Mary Barber Graham moved her family through Charleston to the Carolina backcountry, locating permanently in Mecklenburg County, N.C. Joseph Graham was educated at Charlotte's Queen's Museum (later Liberty Hall Academy), where he proved himself a good scholar of "mannerly bearing." He was in Charlotte when the patriots of that town adopted the Mecklenburg Resolves on 31 May 1775. The events of May made a lasting impression on the young scholar. Throughout his long life, Graham attested to the revolutionary intent of his Mecklenburg neighbors.

Perhaps it was the inspiration of this patriotic moment or perhaps his Scotch-Irish temperament, but whatever the motivation young Graham was an eager participant in the struggle against British tyranny. Serving periodically from 1778 to 1781 as a volunteer, Graham, aged eighteen to twenty-one years, fought in fifteen minor engagements in North Carolina and South Carolina, while rising in rank from private to major. His most memorable service was commanding the rear guard action against Tarleton's cavalry, which enabled General William R. Davie to evade Cornwallis's troops after the British capture of Charlotte. Wounded nine times, six by saber and three by lead, the bleeding and exhausted Graham was left on the field for dead; however, he survived and, after two months' recuperation, became major of a company of dragoons that engaged Tories and British regulars in the Cape Fear region. Graham demonstrated capacity as a soldier and impressed those who knew him with his youthful determination and devotion to duty.

After the American Revolution, Graham farmed near the Catawba River and held several public offices of varying importance. He was sheriff of Mecklenburg County (1784–85) and for a time served as government commissioner in land transactions. As a delegate to the 1788 Hillsborough convention to discuss the federal constitution, he voted with the majority against ratification. Later, in the Convention of 1789, he supported adoption of the Constitution. He took no part in the debates in either convention. From 1788 to 1793 Graham represented his county in the North Carolina Senate. There he manifested an interest in education—he served on the first board of trustees for The University of North Carolina—and in internal improvements.

Graham's political horizons seemed unlimited; however, his 1787 marriage to Isabella Davidson, a refined daughter of Revolutionary hero John Davidson, was destined to divert him to more remunerative endeavors. By the early 1790s Davidson, a practical blacksmith who became a wealthy planter and ironmonger, had convinced Graham and another son-in-law, Alexander Brevard, that their future lay in Lincoln County's nascent iron industry. In October 1791 Graham purchased twenty-eight acres, mostly sand and water, on the Lincoln County side of the Catawba. Soon afterwards the three kinsmen—Davidson, Brevard, and Graham—bought an interest in a productive ore bank from Peter Forney. With Forney they formed the Iron Company. Other land was obtained in 1792, and Graham built Vesuvius Furnace on Anderson Creek in east Lincoln County. A suitable residence was constructed on a nearby bluff. There Graham settled his growing family.

These early iron manufacturers were essentially planters with an outside interest, and they learned the techniques of forge and furnace through experimentation. Fortunately the demand for iron products increased apace with the growing population of the western Carolinas. In 1795, Brevard built Mount Tirzah Forge and established his family about three miles from Vesuvius. In the same year the Iron Company was dissolved, with Peter Forney retaining control of the ore bank. Graham, Davidson, and Brevard continued their partnership under the name of Joseph Graham and Company. Industry and good management increased their holdings. In 1804, when Davidson sold his interests to his sons-in-law, the company's assets were valued at $28,510. Ten years later when Brevard and Graham amicably ended their partnership, both were wealthy men. Their products were marketed throughout the region and down the Catawba into South Carolina. During the War of 1812 Graham alone sold the U.S. government 30,000 pounds of shots, shells, and cannon balls of various sizes, making delivery anywhere by wagon.

The War of 1812, which also resulted in an uprising among the Creeks, touched Graham more directly. Long interested in military affairs, he was appointed brigadier general of a brigade of North Carolina and South Carolina militiamen in 1814. Although the brigade arrived after Andrew Jackson's victory over the Creeks at Horseshoe Bend, General Graham was considered an efficient officer. Major General Thomas Pinckney, a South Carolinian who commanded the Sixth Military District, characterized him as having "conducted his Brigade with judgment and propriety" and noted "that he and the officers and men under his command have displayed much zeal, patriotism and attention to discipline." For many years after this renewed military service, Graham was major general of the Fifth Division, North Carolina Militia.

Active in public and business affairs until late in life, Graham was a councillor of state in 1814, a trustee of Lincolnton's Pleasant Retreat Academy, a justice of the peace for nearly forty years, and a ruling elder of the Unity Presbyterian Church. After 1820 he assisted Archibald D. Murphey, who hoped to prepare a state history, by writing a series of remarkably accurate accounts of military activities in western North Carolina and South Carolina. His vivid account, based on memory, of the events of May 1775 proved to be the principal authority for the disputed Mecklenburg Declaration of Independence. Although Murphey never completed his history, many of the Graham manuscripts eventually were included in the archives of North Carolina.

Upon his death Joseph Graham was buried at Machpelah Presbyterian Church, the burial grounds of the Brevards and Grahams located between the family plantations.

Louise I. Trenholme, The Ratification of the Federal Constitution in North Carolina (1932).

My father and grandfather,

My father and grandfather, both name George Graham, were born in Memphis, TN. The land they lived on was supposedly granted to Joseph Graham for service in the Revolutionary War. A reprinted obituary that my Aunt Rosa had, stated that MajGen Joseph Graham was found wounded (three by saber and two by musket) lying in a creek after a skirmish with the British in North Carolina. He was nursed back to health by a slave women. Also there an area of North Memphis named Raleigh, after Raleigh, NC.

My ancestors Randolph and

I do not believe the land grants in question were for service in the war, often called "bounty land". For NC soldiers in the war, only those on the Continental Linet for North Carolina receive bounty land and the land was specifically set aside in what later became the state of Tennessee. I suggest you look through the catalog of some of the records in the State Archives, which includes land grants, but not bounty land. https://archives.ncdcr.gov/doc