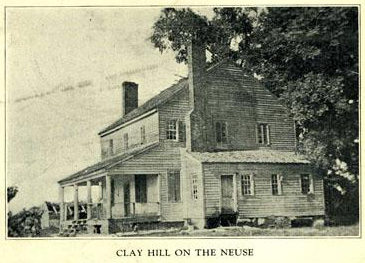 John Hinton, colonial and Revolutionary soldier, legislator, councilor of state, justice, and sheriff of Wake County, was born in that part of Johnston County that became Wake in 1771. He was the oldest son of Colonel John Hinton, a soldier, patriot, public servant, and planter of Johnston (now Wake) County; his mother was Grizelle Kimbrough, daughter of Buckley Kimbrough of Virginia and Edgecombe County, N.C., and his wife (a Miss English[?]). His paternal grandparents were the immigrant "Col." John Hinton of Chowan County and his wife, Mary Hardy. Hinton was of English-Scottish ancestry: the Hintons entered England from Normandy with William the Conqueror and the Kimbroughs, according to genealogists, were Scottish-English.

Although raised as the oldest son of a wealthy and prominent family, Hinton followed the pattern of his ancestors in self-reliance, initiative, industry, and dedication to personal achievement as well as to the progress of his community and state. His education is undocumented but there is ample evidence that his training far exceeded the mere rudiments of literacy. Devoted to and closely associated with his famous father, young Hinton was, nevertheless, a man of great presence and influence and a leader in his own right. He built his home, Clay-Hill-on-the-Neuse, in what was then Johnston County and on 27 June 1765, at age seventeen, married sixteen-year-old Pheribee Smith, daughter of John Smith, Jr., and his wife, Elizabeth Whitfield, of Smithfield, named in Smith's honor.

During the Battle of Alamance on 16 May 1771, Hinton, a captain, was with his regiment in Wake County, his commanding officer and father, Colonel John Hinton, having remained there on direct orders from the governor to "support the proper officers in forthwith collecting the fines due from the militia men agreeable to the Militia Law, for appearing at the general muster of the 6th Inst., without arms." Four days later, on 20 May, he was with Colonel Hinton's Wake County regiment when it joined Governor Tryon's army at Sandy Creek. By 6 Oct, 1773, he had been promoted to major in his father's regiment. When North Carolina joined the other colonies in the American Revolution, Major Hinton gave his full support to the cause of independence and fought with the Wake militia regiment in Governor Richard Caswell's army at the Battle of Moore's Creek Bridge on 27 Feb. 1776. He continued to serve with great personal courage throughout the war. Soon after April 1777 he was promoted to colonel to succeed his father, but declined to serve in that rank.

Returning to Wake County, Hinton served as a member of the House of Commons in 1779, councilor of state from 3 Dec. 1799 to 1801, justice from 1780 to February 1818, and sheriff for some time prior to 1788, when he settled his account by sheriff's return (turned over revenue collected to state treasurer) to September 1789.

Hinton had vast landholdings in Wake County, some inherited and some acquired through land grants and his own business acumen. When he came into his inheritance in 1784, Hinton was not only one of the wealthiest men in the county but one of the most influential as well.

Major John and Pheribee Hinton had seven known children: John, William, Willis, Samuel, Mary (Polly), Grizelle, and Elizabeth (Betsy). The few references to marriages of daughters Nancy and Sarah are undocumented and are not supported by the dates involved; there was no mention of the so-named daughters in Hinton's will. Samuel, who was graduated from The University of North Carolina in 1798, died in January 1802; he was unmarried. Willis died unmarried in 1806. John married Sarah (Sally) Bryan; William married Candace Rosser; Mary married her cousin, Henry Lane; and Grizelle married Judge Henry Seawell. All had families. Elizabeth died unmarried at Clay-Hill-on-the-Neuse in 1865.

Pheribee Hinton died in 1810, eight years before her husband; her death was reported in the Raleigh Register of 27 Dec. 1810. Hinton's death was reported in the Raleigh Register of 23 Oct. 1818: "Died at his seat on Neuse River in this vicinity, Major John Hinton, an old and universally respected citizen, and one of the best and most extensive Farmers in the County. He has left a numerous family connection, and many friends to bewail his loss." Both husband and wife were buried in the family cemetery at Clay-Hill-on-the-Neuse in graves marked simply "J. H." and "P. H."

By his will of 25 Aug. 1818, Hinton devised his pew in the Presbyterian Church in Raleigh to his two surviving daughters, Grizelle and Elizabeth. He left in trust to his son William one acre of land at Maloby's Crossroads, including the site of a meeting house, for "the use of all Christian clergymen to preach on & for the benefit of the community to be used solely as a place of Divine worship." An old, small brick church stands at this site, east of Raleigh, and is used by a black congregation of the Baptist denomination.

For his valiant military service during the Revolutionary War and for his many public services, Hinton was honored by a commemorative marker near the site of his home, Clay-Hill-on-the-Neuse, about five miles east of Raleigh. The marker was presented by the Bloomsbury Chapter of the Daughters of the American Revolution. The home fell many years ago, but the family cemetery remains, enclosed by the original stone wall. Pictures of the house are extant. There are no known likenesses of Major Hinton.