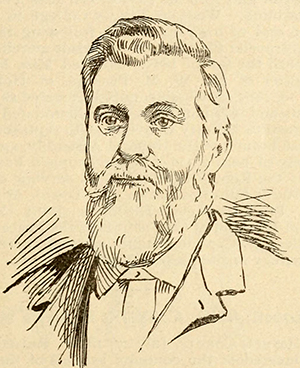 William Hodge Kitchin, orator and politician, was born in Lauderdale County, Ala., the son of Boas and Arabella Smith Kitchin. When he was four, his parents returned to their native North Carolina and settled in Halifax County, where he resided for the rest of his life. Kitchin attended Emory and Henry College in Virginia but left when the Civil War broke out, enlisting as a private in the Second North Carolina Volunteer Regiment. Eventually promoted to captain, he fought with the Army of Northern Virginia until wounded and captured in 1864.

After the war, the young veteran (now nicknamed "Captain Buck") attended to his farm and business activities in Scotland Neck. He became interested in politics and studied law, earning his license in 1869. The Democrats of the Second Congressional District selected him as their "forlorn hope" in 1872, and though he had no chance of winning a seat in Congress from the "black second," he made blistering stump speeches designed to build party morale. On election day he was overwhelmed, carrying only one of the ten counties in his district.

Six years later, in 1878, Kitchin won the nomination for Congress a second time. His chances for victory were better in this election because the majority party was deeply divided, with black politicians James E. O'Hara and James H. Harris each claiming to be the regular Republican candidate. Kitchin won the election but only after county canvassing boards in Halifax and two other black counties rejected hundreds of O'Hara ballots on flimsy technicalities. O'Hara contested the election in the state courts and in the House, but to no avail.

As a member of Congress, Kitchin showed himself to be an intensely partisan, old-fashioned Democrat. He condemned not only Republican "bayonet rule" and corrupt practices, but also "undemocratic" internal improvements from which the South might benefit. In his bid for reelection in 1880 he was defeated by Orlando Hubbs, a northern-born white Republican. With the Republicans united it was virtually impossible for a Democrat to win. The voting in Halifax was once again tainted by charges of fraud, and a federal grand jury later indicated seven election officials, two of whom were convicted.

Although Kitchin held no significant office in the 1880s, he gained a reputation as a powerful orator, and his services were often in demand during political campaigns. A tall man with a full black beard, he "stirred party passion as no other man of his day," remembered Josephus Daniels. As Democratic elector-at-large in 1884, he sparked controversy when he publicly declined to make further appeals for the black vote. In 1888, he commented: "You may talk tariff, revenue, corruption, fraud, pensions and every other evil . . . till doomsday and not one man in ten will remember what you said three minutes after you stop. . . . But when you talk negro equality, negro supremacy, negro domination to our people, every man's blood rises to boiling heat at once."

For four years Kitchin was a journalist—as well as lawyer, farmer, businessman, and politician. From 1883 to 1887 he edited the Scotland Neck Democrat, dispensing commentary on a wide range of subjects with his usual vigor. He quickly became disgusted with Democratic President Grover Cleveland, partly because of Cleveland's stand on racial issues. "I would prefer the Devil himself for President to Cleveland, provided he was not a Republican," he wrote to Senator Zebulon Vance in 1887, and he strongly opposed Cleveland's nomination in 1888 and 1892.

Kitchin was a leading contender for the Second District's congressional nomination in 1892, though in the end he lost to Frederick A. Woodard of Wilson. Halifax County Democrats nominated him for the General Assembly, and, in a year of confusing political realignment—as the new Populist party struggled with the two old parties—Kitchin was victorious.

Despite his years of fervent loyalty to the Democratic party, Kitchin was so distressed by the Cleveland administration that he joined the Populists in the spring of 1894. A strong supporter of free silver, but not other Populist ideas such as government ownership of the railroads, Kitchin lent his influence to the Populist-Republican fusion which swept to power in the 1894 elections. By the next campaign, however, he was working with the Democrats again, praising the free-silver candidate, William Jennings Bryan, and warning the voters of the threat to white supremacy posed by the Fusionists. Kitchin formally returned to the Democratic party at the end of 1897, though he had been a Democrat in all but name for over a year. In the dramatic elections of 1898 and 1900, he and his sons William and Claude denounced the dangers of "Negro domination." Kitchin died in 1901 shortly before Claude took his seat as a representative of the Second District in the Fifty-seventh Congress. William represented North Carolina's Fifth District for six terms and was elected governor of the state in 1908.

Kitchin married Maria F. Arrington of Halifax, and they had eleven children. In religion, he was, as he once described himself, a "militant Baptist."

W. F. Tomlinson, Biography of the State Officers and Members of the General Assembly (1893).