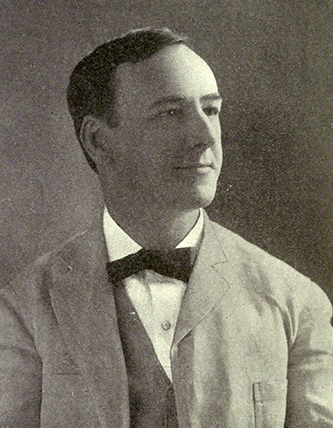 Josephus Daniels, newspaper editor, secretary of the navy, and ambassador to Mexico, was born in Washington, N.C., the fourth of five children of Josephus and Mary Cleaves Seabrook Daniels. His great-grandfather, Thomas Daniels, had migrated to Roanoke Island from Ireland in the late eighteenth century. His father, a Whig and a Unionist before the Civil War, was a ship carpenter and worked in the Confederate shipyards at Wilmington during the war; he was killed 28 Jan. 1865 when a steamer in which he was a passenger was fired on by Confederate troops at Washington.

Josephus's mother then moved to Wilson and in December 1866 became postmistress of that community. She raised young Daniels as a devout Methodist and sent him to the Wilson Collegiate Institute, a private boarding school. He left the school in 1880 to become the local editor of the Wilson Advance. Two years later he purchased the paper. By 1885 he was also writing editorials for the Kinston Free Press, which he owned with his brother Charles, and for the Rocky Mount Reporter of which he was part owner. In the same year, he was president of the North Carolina Press Association. 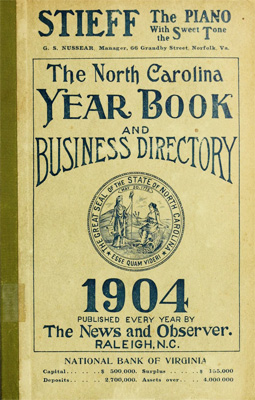 In 1884 Daniels "conceived the idea" of practicing law while continuing in his chosen profession as editor. He entered the law school at The University of North Carolina at Chapel Hill in the summer of 1885 and passed the bar examinations in October. In the meantime, through the generosity of Julian S. Carr, a wealthy Durham industrialist, he had acquired ownership of a Raleigh weekly, a recent combination of the State Chronicle and the Farmer and Mechanic. The new weekly succeeded, and Daniels's growing reputation persuaded the legislature to appoint him state printer in 1887, 1889, 1891, and 1893. Encouraged by relative prosperity, in 1890 he converted the State Chronicle into a daily, a venture that failed financially two years later. He disposed of the State Chronicle but promptly established the weekly North Carolinian.

During these years, Daniels's editorial writing was influenced by his membership in the Watauga Club which he had joined in 1885, the year after the club's founding. Among the goals of this organization were the promotion of popular education and the encouragement of industry in the South. Daniels endorsed these goals in principle and supported federal aid to education and the establishment of the North Carolina College of Agriculture and Mechanic Arts (chartered in 1887 and opened in 1889). However he distrusted "big business" and fought the "tobacco trust." Like the Populists, he favored the establishment of a state railroad commission, antitrust legislation, the free coinage of silver, a graduated income tax, and the direct election of senators. He was, moreover, an early supporter of woman suffrage, of workmen's compensation laws, and of the regulation of 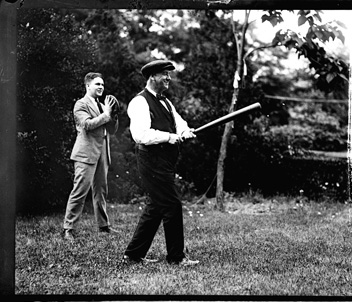 child labor. Although he frequently supported such issues through his editorial columns, he remained a loyal Democrat throughout his career. Indeed, his partisanship in the 1880s had caused his mother to lose her job as postmistress at Wilson; and his effective campaigning in 1892 resulted a year later in Cleveland's appointing him to a post in the Department of the Interior.

For years, one of Daniels's principal rivals in the newspaper business had been the Raleigh News and Observer, edited by Samuel A. Ashe. In 1894, an agent of Julian Carr in collaboration with Daniels purchased that newspaper with the understanding that Daniels would be its editor. In August of the same year, Daniels began writing editorials from Washington, D.C., for the News and Observer and early in 1895 moved back to Raleigh to assume complete control.

Daniels returned to a state in political turmoil. In 1894 a "fusion" of Republicans and Populists had won control of the state legislature, and in 1896 a Republican, Daniel L. Russell, was elected governor. Daniels became a devoted follower of William Jennings Bryan and helped plan Bryan's strategy for obtaining the presidential nomination in 1896. Having proved his effectiveness as a party worker, Daniels in 1896 was appointed Democratic national committeeman from North Carolina, a post he retained until 1916. In North Carolina he did his best to split the Republican-Populist coalition. In the "white supremacy" campaign of 1898, the News and Observer emotionally warned white voters of the dangers of "Negro domination." Two years later Daniels enthusiastically backed Charles B. Aycock, a lifelong friend, for governor and supported the amendment to the state constitution that effectively disfranchised most black voters. During these years, too, Daniels led a fight against those who would deprive The University of North Carolina of state financial support and supported all measures that would control the sale of alcoholic beverages, particularly the referendum for statewide prohibition in 1908. Under Daniels's vigorous editorship, the News and Observer became a success. He had taken a virtually bankrupt paper with a circulation of perhaps 2,500 in 1894, paid off its debts, bought up Julian Carr's stock in 1905, and saw the circulation steadily increase (by 1947 it had reached about 100,000). He had also founded The North Carolina Yearbook and Business Directory and published The North Carolina Review, a literary supplement, from 1909 to 1913. 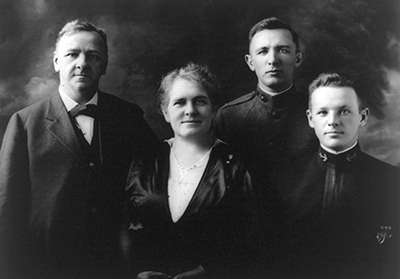 In the meantime, he had become a friend and political supporter of Woodrow Wilson. Daniels succeeded in healing some of the differences between Wilson and Bryan, played an effective role in securing Wilson's nomination in 1912, and became Wilson's publicity chief in the presidential campaign. Appointed secretary of the navy, he was one of four cabinet members to serve throughout Wilson's two terms. As secretary, he demonstrated an unprecedented interest in the lot of enlisted men, providing them with schools aboard ship and in the navy yards. He upset the navy brass by banning the use of alcoholic beverages in those locations, carried out Wilson's orders in the occupation of Vera Cruz in 1914, and fought continually to protect naval oil reserves against private exploitation. In 1915 Daniels launched an enormous building program and established the Naval Consulting Board headed by Thomas A. Edison; the following year he won congressional approval for the building of a government-operated armor plate factory. During the war he also served on the Council of National Defense, the general agency supervising the war effort, as well as on the Committee on Public Information, the agency responsible for censorship and propagandizing the war effort.

In 1921 Daniels returned to Raleigh and the News and Observer. He had beco 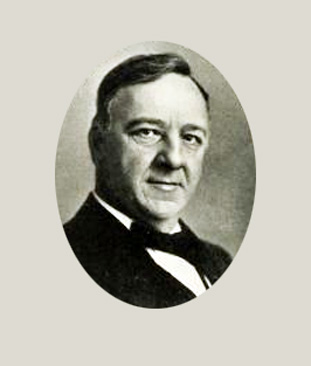 me a member of the board of trustees of The University of North Carolina in 1901 and remained an active trustee until his death. During the 1920s, he was a persistent advocate of the consolidation into one university of the three state-supported colleges at Chapel Hill, Raleigh, and Greensboro; he also championed the nomination of Frank P. Graham to succeed Harry Woodburn Chase as president of the university in 1930. In politics, he fought the Ku Klux Klan; he supported McAdoo in 1924 and Cordell Hull in 1928 for the Democratic nomination for the presidency, but on both occasions loyally endorsed the party's nominees. Despite a long-standing principle to avoid running for elective office, he probably would have accepted the nomination for governor in 1932 had he not been seriously injured in an automobile accident.

In 1932 Daniels supported Franklin D. Roosevelt first as a candidate for the Democratic nomination and then in the presidential campaign. Roosevelt had served as assistant secretary of the navy under Daniels from 1913 to 1921, and in spite of some differences each came to have sincere admiration for the other. In 1933, Roosevelt appointed Daniels ambassador to Mexico. In this post Daniels in 1934 negotiated a settlement of special claims of U.S. citizens for losses incurred during the recent Mexican revolution; over a longer period of time, he worked out terms for the expropriation by the Mexican government of foreign-owned oil properties. He otherwise comported himself to win the plaudits of Roosevelt and the affection of Mexicans of all classes. 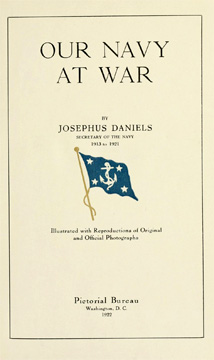 Throughout his life Daniels was a devoted, indeed, a sentimental family man. On 2 May 1888 he married Addie Worth Bagley of Raleigh. They had six children. Two daughters died in infancy, Adelaid in 1893 at the age of one and another shortly after birth in 1911. Four sons survived: Josephus (b. 1894), Worth Bagley (b. 1899), Jonathan Worth (b. 1902), and Frank Arthur (b. 1904). His wife's increasingly crippling arthritis led to his resignation as ambassador to Mexico in 1941. They returned to Raleigh where she died in 1943. Again a full-time editor, Daniels fought for a nine-month school term and for a "good-health" program in the state. Nationally he opposed compulsory military service after the war and supported Roosevelt's renomination in 1944. On the question of civil rights, he opposed efforts on the part of southern delegates to write a white supremacy plank into the Democratic platform in 1944. He advocated fair treatment for black people, but opposed federal civil rights legislation and feared social intermingling. Although he was ashamed of the extreme racism that had inspired him in 1898 and 1900, he continued to favor what he considered to be Aycock's approach of solving racial problems through education.

Daniels remained vigorous until November 1947 when his health declined. Nevertheless, he went to his office regularly until 3 Jan. 1948. He died of pneumonia at his home and was buried in Oakwood Cemetery, Raleigh.