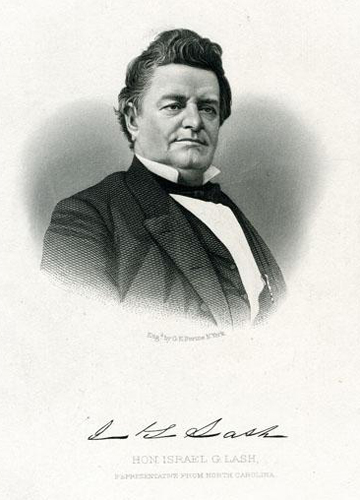 Israel George Lash, businessman, banker, and congressman, was a native of Bethania in Forsyth County. A Moravian by heritage and choice, he was the son of John Christian and Anna Lash. He was educated in the common schools and a local academy. At fifteen his formal schooling ended, and he returned to the family farm. When he was twenty, Lash established a mercantile business to which he soon added an extensive cigar manufactory. Sagacious and diligent, he prospered. About 1845 he moved to Salem where he enjoyed continued business and financial success. His reputation for integrity and sound judgment having preceded him, in 1847 Lash became Salem's first banker as cashier of a branch of the Wilmington-based Bank of Cape Fear. The general financial crash occasioned by the Civil War ended this banking venture; but, undeterred, Lash founded the First National Bank of Salem in 1866 and served as its president until his death. Possessed of great financial acumen, he accumulated a fortune consisting of money, stocks, city property, and western lands. He was a kind man whose quiet generosity benefited the needy of all races as well as the Moravian church, the town of Salem, and other public charities.

Lash was a Union Whig who never abandoned his principles. He especially abhorred political demagoguery; and, although he owned many slaves, he was utterly opposed to secession. He considered secession the death knell of slavery and warned of devastation and ruin, despite the fanaticism that was rampant in the South in 1860–61. He did nothing to conceal his views during the Civil War, supported the peace movement, and advocated an early restoration of the Union. A cooperationist in the constitutional convention of 1865, Lash moved into the Republican party believing therein lay the easiest road to reunion. He was elected to the Fortieth Congress, defeating Conservative Livingston Brown by a substantial margin. He was easily reelected to the Forty-first Congress but subsequently declined nomination for another term because of poor health. His congressional service was honorable but undistinguished.

Before his death, Lash endured several years of painful physical affliction and long periods of confinement with great patience and fortitude. He was interred in the Moravian Cemetery at Bethania.

Bank of the Cape Fear in the NC Business History: http://www.historync.org/BankCapeFear.htm

This is my great-great

This is my great-great grandfather's slave master. My great-great grandfather was Wesley Lash of Bethania, N.C. He was a farmer when he became a free man. He brought 80 acres of land. His wife was Betty Koger whose slave narrative is in the Library of Congress as Betty Cofer. He name was misspelled. She mentioned in her slave narrative that papa belonged to Master Israel Lash. There is now a fire station on his land. Fire Station 22 Koger Fire Station. My mother lives across the street from the fire station. Betty Koger is her great grandmother. My mom has shared stories of Betty. When Betty was interviewed, my mother recalls standing behind her great grandmother fanning her with rolled up newspaper cut up in stripes like a fan in 1937. My mother was 7 years old. Now, my mother is 83 years old and she will celebrate her 84 birthday on September 22.

Thank you for visiting NCpedia and taking time to share this information with us and to share your family's relationship to this history. Your comment and information will stay with this entry for other NCpedia visitors, and we appreciate that you've shared it with us.