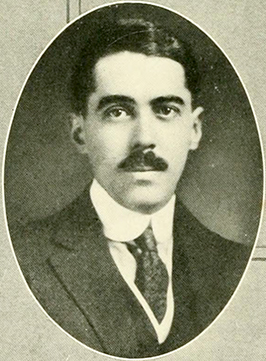 William Lunsford Long, business executive and legislator, was born at Longview, his maternal grandmother's plantation near Garysburg, Northampton County, the fourth child of Bettie Gray Mason and Lemuel McKinne Long. Among his ancestors were Colonel Nicholas Long, Willie Jones of The Grove, and Governor Hutchins G. Burton. Long studied under private tutors and, with his three brothers, enjoyed a vigorous boyhood of farming, fishing, and hunting at Longview as well as at Occoneechee Neck. There also were summer visits to his maternal grandfather's plantation in nearby Brunswick County, Va. He was graduated from The University of North Carolina in 1909, as a member of Phi Beta Kappa, Sigma Alpha Epsilon, the Philanthropic Society, and the Order of the Gimghoul. Throughout his life, Long was devoted to the members of the class of 1909, especially Kemp Davis Battle, Frank Porter Graham, Charles W. Tillett, Jr., and Francis E. Winslow. Between 1909 and 1911 Long studied law at The University of North Carolina; he also taught Greek. In 1911, on his twenty-first birthday, he was admitted to the bar and began to practice in Jackson with the firm of his grandfather, Judge Thomas W. Mason. After Mason's death in 1921, Long established the firm of Long and Crew at Roanoke Rapids.

Long was elected to the North Carolina House of Representatives in 1914 and to the state senate in 1916. He served in the senate until 1924 and again in 1927–28. A strong leader of the Democratic party and a powerful speaker, he exercised considerable influence. He was long remembered for a speech advocating the outlawing of the Ku Klux Klan in the state, a measure defeated at the time but afterwards approved. Long played a significant role in securing passage of the state's first child labor law, and he helped to overcome strong opposition to a bill for the state's first bond issue for constructing public highways. He contributed significantly towards the creation of the State Board of Public Welfare. A member of the state Democratic executive committee from 1918 until 1928, he no longer held public office after 1928 but was a delegate to the Democratic National Convention in 1932 and 1960 as well as an alternate in 1948. After Long's death, the Raleigh News and Observer commented that he was one of a few men to exercise so much influence on legislation in North Carolina in the 1920s.

In other public service, Long was a trustee of The University of North Carolina (1917–31) and of Elizabeth City State Teachers College (1956–64). He was a vestryman and warden of Emmanuel Episcopal Church, Warrenton; an honorary life member of Rotary International; and president of the Warren County Historical Society. In the latter position he was instrumental in having a history of the county written and published. During his later life, Long lived in Warrenton. He collected art, enjoyed historical and literary study, and engaged in boating, hunting, fishing, and swimming. A noted host, he entertained a wide circle of friends and acquaintances. He was also a supporter of the North Carolina Museum of Art and of the Ackland Art Center at The University of North Carolina at Chapel Hill and presented several works of art to both facilities.

On 12 Jan. 1914, at Petersburg, Va., Long married his distant cousin, Rosa Arrington Heath, the daughter of Tarlton Fleming and Rosa Gilmour Arrington Heath; she attended the Southern Female Seminary in Petersburg and St. Mary's School in Raleigh. They became the parents of three children: Rosa Arrington Heath (Mrs. James Payne Beckwith), Ruth Mason (Mrs. Peter Pescud Williams), and Dr. William Lunsford Long, who married Rebecca Davis Williams, sister of Peter P. Williams. Long died at his home in Warrenton and was buried in Fairview Cemetery. A portrait of him is owned by a grandson.