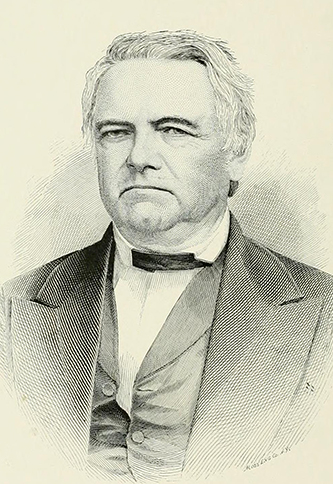 James Walker Osborne, lawyer, politician, and businessman, was born in Salisbury, the youngest of four children of Edwin Jay and Harriet Walker Osborne. His father, an eloquent and gifted lawyer, was the son of Adlai Osborne of Iredell County. His mother was the daughter of James and Magdalene Margaret DuBois Walker of Wilmington. When Harriet Osborne died in 1815, the four children were sent to various relatives to be raised. James lived with his paternal uncle and aunt, Robert and Margaret O. Davidson, who, though childless, reared many of their nephews. Their farm, Hollywood, on the horseshoe bend of the Catawba River (Mecklenburg County), was known for its abundance.

Osborne attended a school conducted by the Reverend S. C. Caldwell, then, through the aid of Elisha Mitchell, entered the sophomore class of The University of North Carolina. He was graduated in June 1830, before his nineteenth birthday, and received an M.A. degree from the university in 1839. After studying law in Hillsborough with his cousin, William A. Graham, he was admitted to the bar in 1833. From 1836 to 1838 he was solicitor for Mecklenburg County.

On 5 Apr. 1842 Osborne married Mrs. Mary Ann Irwin Moore, the widow of Thomas J. Moore of South Carolina and Mississippi and the daughter of John Irwin, a merchant and banker in Charlotte.

His political career initiated, Osborne, a Whig, was a candidate for state senator from Mecklenburg in 1840 but lost to J. T. J. Orr by sixty-six votes in a general Democratic victory. An able political observer, orator, and debater, he was chosen first presidential elector at large in the Clay campaign of 1844. Politically he allied himself with the "Federal Whigs," William A. Graham and John Motley Morehead, and through the influence of Graham, his mentor and friend, he was appointed by President Millard Fillmore as superintendent of the U.S. Mint at Charlotte, serving from 1849 to 1853. Osborne reluctantly entered the campaign of 1853, running against Democrat Burton Craige for the Seventh District congressional seat. He advocated distributing the proceeds of public land sales and opposed the indefinite extension of the U.S. boundaries. The Whig party's decline (by then it was practically defunct) and the concern for southern rights helped ensure Craige's victory.

A supporter of internal improvements throughout his career, Osborne was a principal speaker at the first public meeting held at Charlotte (1848) to arouse sentiment for railroad construction and corresponded with political leaders to emphasize this need. He wrote an informed report on the geographic features, natural resources, products, and potentials of the North Carolina Piedmont. This knowledge and the mint superintendency led him to invest heavily in mining. In 1854 he acquired the Rudisil gold mine, then the premier mine of the state, and owned or invested in the Bush Hill mine, the Dunn mine, the Williams mine, and the Brem mine in Chesterfield, S.C. He also invested in the Western Plank Road.

A Whig without a party, Osborne, in 1856, allied himself with the Democrats. In 1859 Governor John W. Ellis appointed him judge of the superior court, an office he held for six years. In 1861 Osborne served as a delegate from Mecklenburg to the Secession Convention, where he voted for seccession. During the Civil War, he resided in Charlotte or at his aunt's farm on the Catawba River. At this time he was a partner in the Mecklenburg Salt Works, directed by Professor W. C. Kerr of Davidson College, which manufactured salt from the South Carolina coast.

After the war, Osborne formed a law partnership with Rufus Barringer in Charlotte. He was an elector in the Seymour-Grant campaign of 1868. In that election, as a Democrat, he won a seat in the state senate, representing Mecklenburg County until his death.

Osborne was known for the depth and diversity of his knowledge. He was said to have been an adroit military tactician while also well-versed in Christian theology; he served as a ruling elder in the Presbyterian church for twenty years. He corresponded with David L. Swain, James D. B. DeBow, Peter Force, and Benjamin Lossing on various historical topics and often expressed his intention to write a history. He was a trustee of the Charlotte Female Academy and of Davidson College from its incorporation until his death. (Osborne, William A. Graham, and Joseph H. Wilson were attorneys for the college in its attempt to secure the Maxwell Chambers bequest.)

In addition to his other economic pursuits, Osborne had landed interests in Louisiana, Alabama, and North Carolina. Despite the monetary advantages of his inheritance and marriage, his nine-hundred-volume library, which was sold, and other assets could not cover the $20,000 in debts that remained at his death.

Osborne was the father of seven children. Three sons lived to adulthood and became lawyers. His wife was known to be high-minded, well read, and an exceptionally shrewd businesswoman. Four portraits of Judge Osborne are known to exist. He died in Charlotte and was buried in Elmwood Cemetery.

Alexander, John Brevard. "Chapter III." Biographical sketches of the early settlers of the Hopewell section and reminiscences of the pioneers and their descendants by families. Charlotte, N.C.: Observer Printing and Publishing House. 1897.36. https://archive.org/stream/sketchesofearlys00alex#page/36/mode/2up  (accessed September 6, 2013)