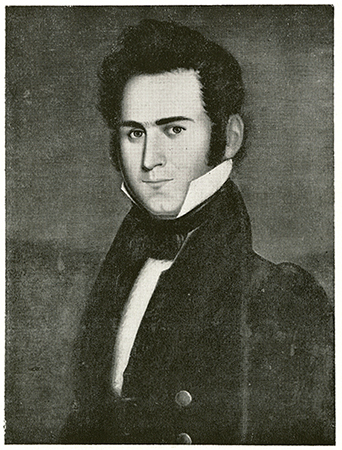 Frederick Philips, the father of Dr. Philips, represented Edgecombe in the General Assembly in 1797 and was at times a schoolteacher and county surveyor. On 22 July 1830 he advertised "The Hickory Grove Academy" in the Tarboro Free Press being four miles from Teat's Bridge. The terms of tuition were six dollars for five months of reading, writing, and arithmetic and twelve dollars for students who wished to study surveying. In a letter, dated Manor Hill 16 Sept. 1815, Frederick Philips wrote his cousin Joseph Philips of Sugar Tree Grove near Nashville, Tenn., that his son James, then eighteen, was attending the academy in Tarboro and was a good scholar. He added that James expected to finish his Latin Studies that year and would then go to Raleigh to complete his education.

James Philips decided to become a physician and entered the office of a neighbor, Dr. Cullen Battle, as a medical student. He later attended a series of medical lectures at the University of Pennsylvania. About this time his father had had financial reverses and sold his last remaining slave, a valuable carpenter, to finance his son's attendance at the lectures in Philadelphia.

It is not known when Dr. Philips returned to his native county to practice. However, he had become established by 1822, as he was in that year one of the physicians involved in the so-called North Carolina Accident, a small-pox epidemic in the town of Tarboro and the surrounding county. In 1821 the Vaccine Institute, established in Baltimore by the federal government in 1813, had appointed Dr. John F. Ward as agent for Edgecombe County. In December 1821 Ward was accidentally sent some material containing small pox instead of cow pox. Ward vaccinated several persons and gave some of the material to James Philips and other physicians who did likewise. Philips and Ward soon saw that the patients vaccinated showed mild cases of smallpox. They obtained the proper vaccine from physicians in neighboring areas and vaccinated as many persons as they knew had been exposed to those improperly vaccinated. In spite of their efforts, fifty people in the county contacted small pox and several died. As a result of the public reaction and through the efforts of the North Carolina delegation in Congress, the Vaccine Institute was unfortunately closed.

Over the years, Philips developed a reputation as a physician of unusual skill and enjoyed a large practice in Edgecombe and the surrounding counties. He himself had several students living in his home as apprentices, including Dr. Newsome J. Pittman of Tarboro, a Dr. Reid, and Dr. Franklin J. Hart.

In the first half of the nineteenth century, it was a rare physician who could support a family on his practice alone. James Philips was as well known as a planter as a doctor. He was one of the earliest in the state to advocate the use of fertilizer and his efforts on his own plantation were met with marked success. In 1852 he addressed the Edgecombe Agricultural Society on the application of chemistry to agriculture. In a newspaper controversy with Dr. Elisha Mitchell of Chapel Hill regarding soil analysis, his views were considered to be more thoughtful and progressive.

In 1827 Philips bought a plantation five miles northeast of present-day Rocky Mount and established his residence there; he named the place Mount Moriah. The doctor was active in Masonic circles, and in 1827 the North Carolina Assembly established a Masonic lodge called "Mount Moriah" on the lands of James J. Philips. It is not known how long the lodge was in operation, but the hall was later used as a schoolhouse. In 1850 the house was considerably enlarged.

On 23 Apr. 1834 Philips married Harriet Amanda Burt, the daughter of William Burt of Hilliardston, Nash County, and his wife Susan Sims. Dr. and Mrs. Philips had five sons and five daughters who reached maturity. The oldest son, Frederick of Tarboro, was for many years a superior court judge. The second son, James, was killed in the Civil War at age nineteen. Of the other sons, Joseph B. represented Nash County in the legislature for several sessions, and John and Walter resided in Edgecombe County. Sallie, the oldest daughter, married Frank Parker, later a colonel in the Confederate army. Susan married J. J. Battle and Elizabeth wed G. C. Battle. Harriet, another daughter, married Benjamin Bunn of Nash County, a member of Congress. Laura became the wife of John Peter Arrington, of Nash County, son of Congressman Archibald Hunter Arrington. Dr. Philips and his wife were both buried in the family cemetery at Mount Moriah.